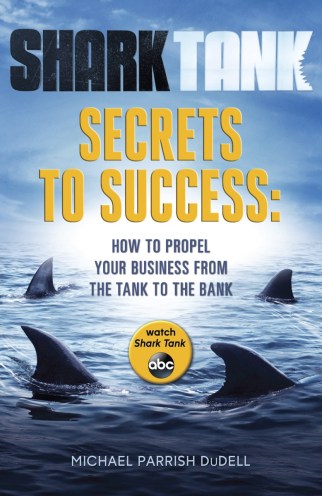 ABC’s hit show Shark Tank has become a cultural phenomenon. The critically acclaimed reality series has reinvigorated entrepreneurship in America, inspiring countless fans to build and grow the company of their dreams. But it takes more than landing a deal with a Shark to turn a fledging company into a national brand.

In his second book for the show, Michael Parrish DuDell goes behind-the-scenes to reveal the untold stories of some of the most memorable and notable companies from the show.  Discover how Wicked Good Cupcakes grew from a small, local bakery into a multimillion-dollar organization. Find out how Tipsy Elves used a popular search engine to build an influential community of passionate consumers. Gain insight into how Grace and Lace turned a simple product into a powerful vehicle for social change.  Learn fascinating details and “where are they now” fun facts about these companies and many other entrepreneurs featured on Shark Tank.

From practical business tips to unforgettable anecdotes and experiences, Shark Tank Secrets to Success provides readers with a playbook for success custom designed by some of “Shark Tank’s” most successful entrepreneurs. It’s the perfect guide for ambitious businessmen and women who want to start and grow a thriving company.

Shark Tank, the critically-acclaimed reality show that has reinvigorated entrepreneurship in America, has also become a culturally defining series. The recipient of the 2015 and 2014 Emmy Award for Outstanding Structured Reality Program, the business-themed show is currently in its seventh season. Tune in on Fridays 9/8c to watch “Shark Tank” on ABC!

Shark Tank Secrets to Success will be published as a trade paperback original under the Kingswell imprint and goes on sale May 3, 2016. Print and eBook formats are available for pre-order wherever books are sold.