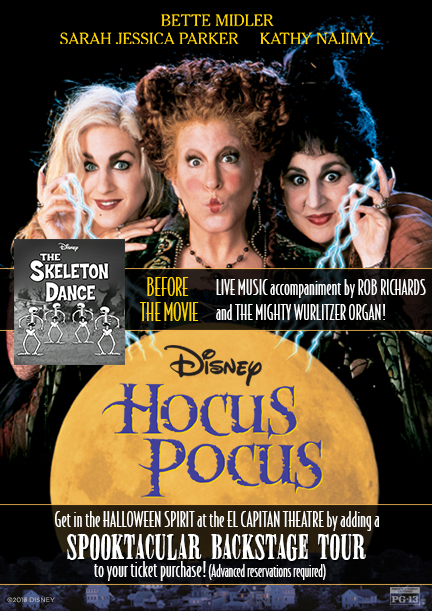 Debney had only two weeks to write the entire score before taking the podium and recording his music for “Hocus Pocus.”  Debney conducted the score himself, featuring the musicians and a female choir.   Debney will return to the podium to conduct his “Hocus Pocus Overture” prior to the film’s screening.

“We are thrilled that composer John Debney is going to premiere his new ‘Hocus Pocus Overture’ here,” said Ed Collins, General Manager of The El Capitan Theatre.  “He has been awarded a Gold Record and three Emmy Awards as well.  Incidentally, his father Louis Debney was a Disney producer and production coordinator who’s credits include “Zorro,” “Walt Disney’s Wonderful World of Color,” and even an episode of the original “Mickey Mouse Club.”

Disney’s Hocus Pocus will have additional screenings on October 22 and 23.  Also prior to every screening of Hocus Pocus, The El Capitan Theatre’s own award-winning organist Rob Richards will accompany the 1929 classic Disney short “The Skeleton Dance” live on the Mighty Wurlitzer Organ.  In the lobby, theatre guests may enjoy props, costumes and photo opportunities from the film before and after each performance.

This year, in addition to the movie-going experience, The El Capitan Theatre introduces its new Spooktacular BACKSTAGE Tour.  Guests will be guided through areas of the theatre rarely open to the public — history will be shared about the Ghouls and Haunts of this historic venue, including the origins of The Mighty Wurlitzer Organ.  Ghosts and Goblins of all ages are encouraged to attend in costume. Advance reservations are required as there is limited space per tour.