Review – Blumhouse’s “Into the Dark: School Spirit” on Hulu

From the sinister minds that brought you The Purge, Happy Death Day and Paranormal Activity, comes the new Hulu original horror series Into the Dark, which turns every holiday into a complete nightmare. The new horror anthology series will feature different actors in each episode, with a new episode being released each month focusing on a holiday from that month.

September’s episode of this ongoing horror series is titled “School Spirit” and zeros in on, you guessed it, back to school. The story follows straight-A high school student Erica Yang who got herself a Saturday detention, but also stumbled into something much, much worse. I have watched and reviewed every episode of Into the Dark so far, and aside from December’s “Pooka!”, I have been somewhat lukewarm on the series. I am very happy to say that School Spirit has bucked the trend and I really enjoyed it.

Like most episodes of the series, it does a fantastic job of building tension while the story progresses. However, this one delivers on fun, likeable characters in an intense slasher situation. It feels very much like one of those classic slasher films, like a Halloween, but more modern, like a Scream.

There is another classic movie School Spirit shares some elements with though, and it’s probably not one you would think of. The group of students in weekend detention with a vice principal on a power trip give off some strong The Breakfast Club vibes, which bring a fun, light-hearted feel to an otherwise gruesome story.

There are two other things that set School Spirit apart from most of the previous episodes of this series. The first is the villain. Where past episodes have featured nondescript killers, who you can see coming from a mile away, the School Spirit (which happens to be the name of the killer in addition to the title of the episode) behaves much more like one of those iconic slashers.

This allows for some classic horror visuals, like the killer passing by in the shadows or standing right behind a character only to disappear. You also get a lot of uncomfortable energy from shots of the long hallways of the school, because you never know when the killer will be standing there.And on top of all that, the School Spirit just has a great look. 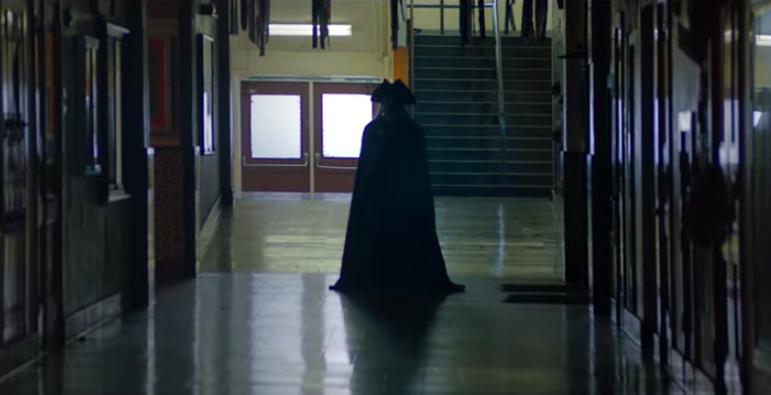 The second thing that sets this episode apart is a twist. I won’t go into details so as to not spoil it, but I will say the ending of this episode delivers in a big way. That’s something I’ve thought was lacking in most other episodes. Typically, you get who the killer is or what their motive is right from the beginning and nothing changes. That is certainly not the case here.

Overall, I think “School Spirit” is fantastically thrilling. It will keep you on the edge of your seat the whole time. In true classic horror form, you never really know what’s waiting around the next corner. If you haven’t watched Into the Dark before, I would say “School Spirit” is a great place to start (though “Pooka!” Is still my favorite).

“School Spirit” premieres on Hulu on August 2, with subsequent episodes of Into the Dark coming each month for a full year. Be sure to check out our reviews of previous episodes and check back for more reviews of this new Hulu original as I try to help you decide if each episode will cost you hours of sleep.