Animation Director Rob Minkoff recently joined the Walt Disney Family Museum for their Happily Ever After Hours event to talk about his incredible career and a project he’s working on right now. His Disney career began as an in-betweener on The Black Cauldron, rising fast to supervising animator on The Great Mouse Detective and eventually directing Roger Rabbit shorts and co-directing The Lion King with Roger Allers. Here are 10 things we learned from Rob Minkoff during this special event. 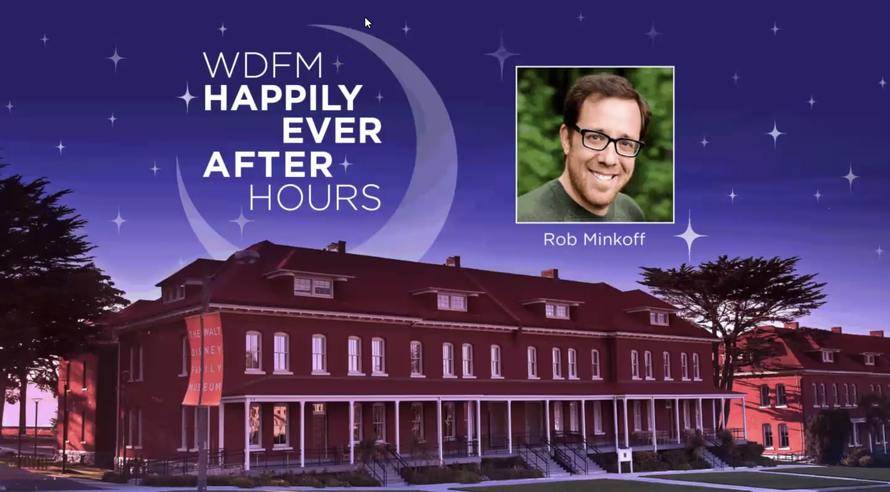 1. He Discovered Animation While Babysitting.

“When I was a kid growing up in Palo Alto one of the most amazing things happened to me when I was 15 years old,” Rob Minkoff shared about a theater production that led to a babysitting gig for the Shapiro’s where he found a book on their coffee table called The Art of Walt Disney. “I cracked it open and it was filled with so much incredible artwork from the golden age of animation.” The book was written by their uncle, Christopher Finch, and Rob asked his parents for a copy, which he received for his birthday. The author of the book that opened the door for generations of Disney Animators would write The Art of The Lion King decades later, allowing Rob to meet a personal hero of his. More recently, he saw an updated edition in a colleagues office and cracked it open to see what the differences were. He was surprised to find a picture of himself working on The Lion King in an updated section about the modern era of Disney animation.

“Chuck was actually a great friend and mentor,” Rob shared about learning from legendary animator Chuck Jones, most famous for his work on Looney Tunes. “In my first year at CalArts, we all heard that there was going to be a tribute to Mel Blanc.” He joined his entire class in attending the special event. “One of my classmates was sitting in the second row seated right behind Chuck Jones and they got to talking.” Wearing Bugs Bunny ears to the event, Rob’s friend got an invite to visit Chuck Jones at his home. “We became very good friends and he invited us back and it was incredible.” Rob has a personalized Chuck Jones drawing of Wile E. Coyote in his office that says: “For Rob, who gets the same expression when faced with a good idea.”

3. He Met Ron Miller Shortly Before He Left Disney.

“I got to work directly with Eric Larson,” Rob shared about his summer internship at Disney Animation while he was still studying at CalArts. “He was still there, but what made the experience even more unusual was it happened during the animation strike of 1982.” Animators stopped work at studios all across Hollywood over a union dispute with studios outsourcing animation work overseas. “We would drive onto the lot every morning, even though there was a strike going on, and all the artists were on the other side of the street with picket signs.” With the historic animation building empty, Rob and his fellow interns took the opportunity to poke through the empty offices and look at the artwork each animator had been working on. Getting bored, one day they went up to the third floor to say “Hi” to the big boss upstairs. He was away, but his secretary took a note and the next week, Eric Larson got a note to send the interns up to see Ron Miller in his office, formerly occupied by Walt Disney. “That was just incredible. We sat for about 45-minutes talking to Ron, who was so gracious and so nice and talked to us about CalArts.” Rob joined Disney full time the next summer, but Ron Miller had been ousted by then. “Just a few years ago, Ron was given a very special award at the Annie Awards. I was on a trip back from China, flying from Beijing to San Francisco and then home.” As luck would have it, Ron Miller was on the same flight from San Francisco to Los Angeles and they got to reconnect. “He was so nice and so warm and said ‘You’ve gotta get up to the Family Museum because it’s an incredible place.’”

4. He Unintentionally Worked with the Sherman Brothers.
“In the early days on Flower Street, we set up a recording studio that was used by a lot of different people including Alan Menken and Howard Ashman,” Rob Minkoff shared about the era of working on films in trailers and warehouses after the animators were kicked off the Disney Studio lot. Disney Legend Burny Mattinson was working on a project with the Sherman Brothers that never came to fruition. “They were writing new songs and I don’t know exactly how this came about, but they needed someone to sing a demo for one of their songs and I got the job. So I got to work with the Sherman Bros and record one of their songs, I think it was called ‘Wandering Star.’” Around that time, Rob Minkoff was working on Oliver & Company and he ended up with a co-writing credit on a song in the film, “Good Company.”

5. Rob Minkoff Was Almost a Co-Director on The Rescuers Down Under.

Having moved through the ranks at Disney Animation quickly, Rob was on management’s radar to direct. “I was being given a shot to be a director on the project, but at the time I remember feeling very strongly that a movie should have only one director.” He soon found himself in a meeting with the head of the animation department, Jeffrey Katzenburg. “I remember saying to Jeffrey ‘You only need one director, only one.’ I ended that meeting and I got a call and they said you’re not going to be a director on the movie.” He kicked himself for it later and didn’t make the same mistake when his next directing opportunity presented itself.

6. He Had to Fight to Get Artists to Work on The Lion King.

“Starting with The Little Mermaid, the studio started to explode and the movies brought a lot of excitement and energy.” After a string of hits, the decision was made to ramp up production to release one film each year. “For the very first time, they were going to split the studio in two and make two movies simultaneously.” Put into production alongside Pocahontas, most of the animators wanted on the more conventional of the two films. “Because of that, we ended up giving younger artists opportunities that they might not have had otherwise.” Tony Bancroft was one of those young artists, who animated Pumbaa and went on to co-direct Mulan. “Tony was somebody who I met when he was a CalArts student.” Rob Minkoff spent one year teaching at CalArts as a favor to Joe Ranft.

“What really did make it difficult was the fact that it wasn’t based on anything, so when we presented the show a number of times, people dismissed it. They didn’t think it was that good or would win audiences over.” During a meeting that would be shared with the entire animation studio, Jeffrey Katzenburg referred to Pocahontas as the “Star” and The Lion King as an experiment that would be lucky to make $50 million at the box office. “It’s one of the reasons why getting the artists was so challenging,” Rob shared during the event. “But the truth was the fact that it was an experiment meant we could do things in an unconventional way and I think that added to the success of the film and what it became because it didn’t have limitations.”

8. He Didn’t Get to Work With Elton John Much.

“We didn’t get to spend a lot of time with Elton, we would spend much more time with Tim [Rice] who would come to the studio and sit through story meetings and understand what we were trying to do.” Tim Rice would take their notes and write lyrics, which he would send to Elton John and then a demo recording would arrive for the directors to review. “When we first heard the ‘Circle of Life,’ we were like, ‘This is amazing, it’s incredible.’” Another famous song from the film, “Hakuna Matata,” was a tougher nut to crack and the directors weren’t satisfied with the first song produced for Timon and Pumbaa, which was eventually released as “Warthog Rhapsody” on the album Rhythm of the Pride Lands. Tim Rice was the one who was familiar with the Swahili phrase that “Means no worries” and got the new song rolling. The directors were also worried that “Can You Feel the Love Tonight” was too traditional for their film and made a choice that got them in hot water with Elton John. They had Timon and Pumbaa sing it and when Elton John saw that cut of the film, he was very upset. Rob quoted him as saying: “What have you done with my song? You have no idea. One of the reasons I took this job was because I’ve always dreamed of writing a classic Disney love song.” As we all know, they directors changed it back, but that experiment made it obvious that the song should start off with Timon and Pumbaa introducing it.

9. Bringing The Haunted Mansion to the Big Screen.

Rob Minkoff’s live-action directorial debut was made with his friend and close collaborator, Don Hahn. “The script was written by David Barenbaum… He did a terrific job bringing a lot of the backstory from the ride.” The film extensively researched the history of the beloved attraction, finding inspiration from concepts that aren’t evident in the finished attraction. “It’s not exactly the ride, people sometimes confuse that. We’re trying to make a movie that could be a companion to the ride.” But the New Orleans Square mansion with room for 1,000 isn’t actually Rob’s favorite Disneyland attraction, a top spot that actually belongs to Walt Disney’s Enchanted Tiki Room.

10. He’s Working on an Animated Remake of Blazing Saddles.