Andres Velez has been cast as a lead in the upcoming drama pilot for ABC, Promised Land, according to Deadline. 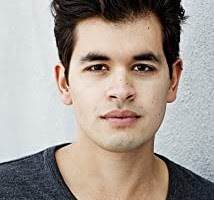