To kick off New York Fashion week, or more of a piggy back to it, Walt Disney World invited us to preview some of the fashions we will see hitting Main Street USA next month. 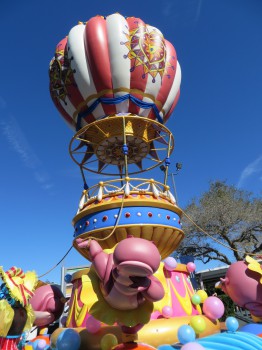 After having a few minutes to preview three of the floats; The Little Mermaid, Peter Pan/Never Land, and part of the Fantasyland finale float that will feature Mickey and Minnie in a hot air balloon; the red carpet was cleared to make way for the stars of the day.  The focus of this event was the unique costumes worn by some of the performers that will surely be some of the most photographed non princess face characters in a long time! The first couple to make their way down the walkway was announced as being part of the PrincessGarden float, but they stylish outfits were overshadowed by the announcement that along with many of the other Disney Princesses, Anna and Elsa would be making their parade debut on the float. 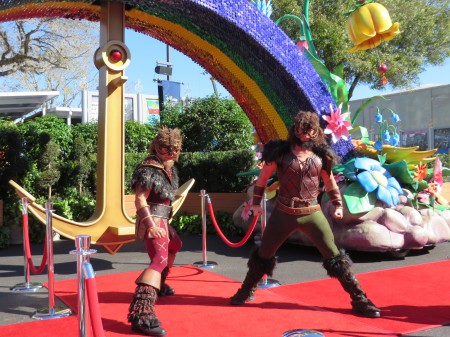 Our next stylish duo was two of the “thug” dancers from the Tangled float. But with the leather, always has to come the lace; so another dancer’s costume was inspired by the maypole and is flowy and fun, inspired by the colors palette of Tangled. Next up we have three of our “under the sea” friends, all with bright colors to match the float and the feel of the classic Disney tale The Little Mermaid. (The Seashell girls’ conch head piece was created by a 3D printer, a first for a Disney parade) 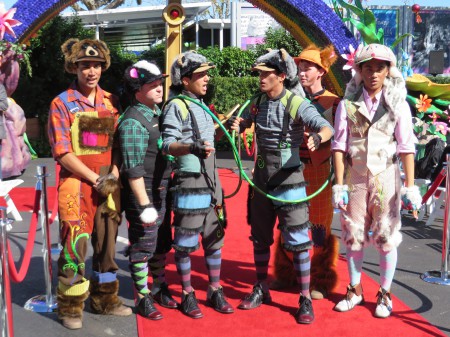 The well dressed Lost Boy won’t want to be caught out in NeverLand without the latest look inspired by another group of trouble makers; The Newsies. This group of boys will be a sure highlight of the parade, very akin to the Donkey Boys from the Main Street Electrical Parade. 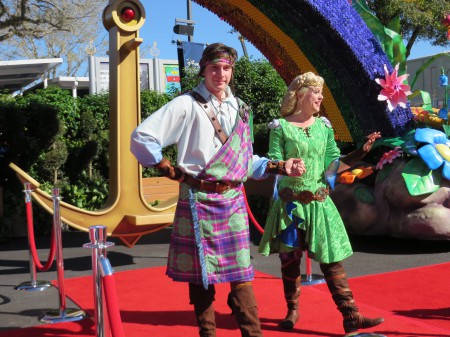 Coming from the green hills of the Scottish Isles, we have the Highland Dancers that will be showing off some Celtic dance moves along with Merida on the Disney-Pixar’s Brave float. From the bright greens now we move to the dark side of beauty. Joining the fire breathing steam punk dragon version of Maleficent will be the thorn stilt walker and raven. 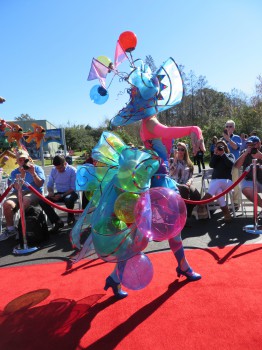 No fashion show, or parade, would be complete with the grand finale! These two beauties would be the belle of any ball…if it were held in Fantasyland. Representing the fun and beauty of bubbles and circus tents, these performers will help bring out Festival of Fantasy parade to a close. 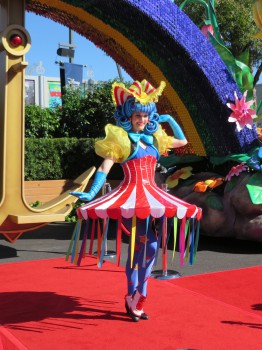 While no set date was said, the term “next month” was said a few times. From just the little bit we saw, this parade will be not only a great parade, but one of the most photogenic Disney has ever put on!

For more information on the parade see the following articles: