Planes: Fire& Rescue is a sequel to last year’s Planes which spun out of Pixar’s Cars franchise.  The new film features air racer Dusty (voice of Dane Cook) as he learns that his engine is damaged and he may never race again.  As a result he must shift gears and enters into the world of aerial firefighting. Dusty joins forces with veteran fire and rescue helicopter Blade Ranger and his team, including super scooper Dipper (voice of Julie Bowen), heavy-lift helicopter Windlifter, ex-military transport Cabbie and all-terrain vehicles known as The Smokejumpers. The film is directed by Bobs Gannaway (“Secret of the Wings”) and is scheduled to be released 3D on July 18, 2014.

I enjoyed the first film more than expected.  While the Disney Toon Studios is looked down upon, the work they have done lately needs more recognition.  Bobs Gannaway’s Secret of the Wings took the Disney Fairies to new heights, and I hope he continues his good work on the world of Planes.

For those that do not know, Bobs Gannaway was Excutive Producer on the fan favorite series House of Mouse.  He also worked on The Emperors New School and Mickey Mouse Clubhouse.  He has shown great love for Disney characters and the brand while extending them beyond their traditional settings.

The first film in the franchise made $90 million domestically and $129 million internationally.  But the true success of the film can be seen in the sales of Planes toys.  Not only did the Planes toys sell well having a positive effect on Disney Consumer Products’ bottom line, the franchise helped shore up the sales of Cars toys which was expected to have a bigger decline due to no new Cars content.  And while consumer products sales are fantastic, the most important part of the process is making a film that resonates to the point where kids and families want to take home tangible memories of the film.  Disney Consumer Products previewed some of the options for bringing the world of Planes in to your living room.  Here are some highlights. 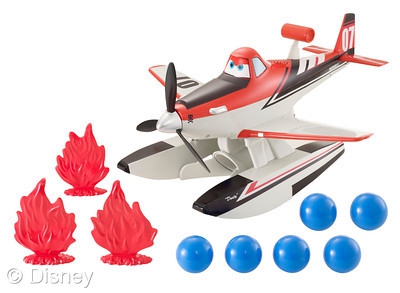 First up is the Fire Blastin’ Dusty from Mattel.  The $49.99 toy allows users to scoop up “water” balls and shoot them at the “fire” targets.  The toy also features sounds and phrases that enhance the play experience.  I think this will be the top toy from the line. 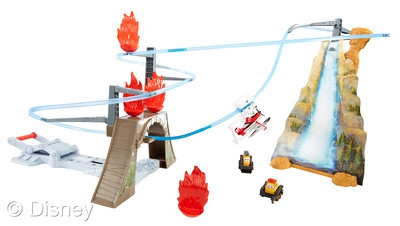 Also from Mattel is the “Action Shifters Burning Bridge Rescue” set.  This toy uses an “action shifter” to allow Dusty to pick up water and then tackle the flames on the bridge.  This is supposed to be a key scene from the film so those that want to recreate it may enjoy this toy which retails for $34.99 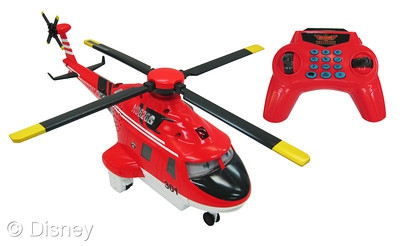 A bigger ticket toy is Thinkway’s U-Command Fire & Rescue Blade Ranger, which retails for $59.99.  The toy is an infrared RC helicopter that features phrases from the film and moveable eyes and mouth.  This one might be on my Christmas list.

And rounding out the line is a continuation of Mattel’s popular diecast line.  The Planes: Fire and Rescue line will feature 16 characters ranging from cars to planes that are featured in the film.

I hope Disney fans will give Planes: Fire and Recue a chance.  Don’t prejudge the film just because it is not made by Pixar.  I can’t promise its good, but I can promise you won’t enjoy it if you don’t give it a chance.