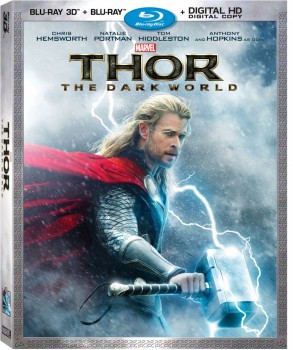 Thor: The Dark World is now available on Blu-ray and DVD.  I presume you have already seen the film so there is no point in rehashing its merits.  So instead, I want to discuss the gem of this release; the audio commentary.  It features Director Alan Taylor, Producer Kevin Feige, Actor Tom Hiddleston (Loki) and Cinematographer Kramer Morgenthau.  If there are two people that the fans of the Marvel Cinematic Universe love, they are Tom Hiddleston and Kevin Feige.  Tom’s fantastic performance and great relationship with the fans have made Loki the most loved villain in the Marvel films.  Kevin Feige is the Walt Disney of Marvel Studios.  Guiding various creative individuals into creating a connected group of fantastic pictures.

One thing that their discussions made me realize is that Iron Man 3, Thor: The Dark World, and Captain America: The Winter Soldier are essentially sequels to more than one film.  The films are a sequel to their own franchise, but also to Marvel’s The Avengers.  This is especially true for the Thor sequel as both Loki’s and Thor’s character arcs weave through all three films.  This must be a daunting task as the challenge of spinning out of two different films requires more finesse than just being a follow-up to a linear franchise.

Iron Man 3 accomplished this by continuing his personal emotional journey from Iron Man 2 while showing the effect that the events of Marvel’s The Avengers had on Tony Stark.  Thor: The Dark World takes a slightly different tactic.  The relationship between Thor and Jane Foster continues from the first Thor film while Thor’s relationship with Loki continues from Marvel’s The Avengers.  It will be interesting to see how Captain America: The Winter Soldier addresses this challenge though one would expect that part of the plot to address the situation of Cap being a man out of his own time due to his defrosting.

I thought I would share some of the fun facts shared during the audio commentary.  I do not want to give them all away as I hope you will pick up the Blu-Ray, but here are some of my favorites:

If you have not read my review of the Marvel One-Shot, All Hail the King,  check it out.  While it does not really tie-in to Thor, it is a fun short that is a nice coda to Iron Man 3.

Now that Thor: The Dark World has been released, our collective attention can turn to Captain America: The Winter Soldier.  With early buzz on that film being quite strong and internet reaction to the Guardians of the Galaxy trailer blowing past expectations, it appears the Marvel Universe has a lot to look forward to.