Mickey’s Neighbor Totoro – The History of Disney and Studio Ghibli

Ghibli is an Arabic word that literally means “hot air blowing in from the Sahara Desert” and is pronounced with a hard “gah” sound (Giblee). In the same way that Disney became a commonly heard name after the success of Mickey Mouse, Ghibli became a commonly heard word with a different pronunciation thanks to Hayao Myazaki. After having success in Japan with his first independent film, Nausicaä of the Valley of the Wind, Myazaki formed his own studio with the profits and chose this word due to its relevance to the theme of Nausicaä. Mispronouncing it with a soft “j” sound (Jiblee) Studio Ghibli was born, bringing this unlikely word into the lives of millions of people all over the world. However, Myazaki wasn’t able to fully back his studio with the money made from Nausicaä. In 1985, he found a financial partnership with a publishing company called Tokuma Shoten. Tokuma would financially back and produce most of Studio Ghibli’s films and distribute them in Japan. Similar to Disney’s early days, the studio produced hit after hit, primarily from Myazaki and his friend Isao Takahata. Films like Castle in the Sky, My Neighbor Totoro, and Kiki’s Deliver Service helped secure a future for the studio and generated international interest. One of Ghibli’s first international endeavors came in 1988 when a new L.A. company called Streamline Pictures acquired the rights to dub their films in English for use on transpacific Japan Airlines flights. Twentieth Century Fox bought the home video rights to this version of My Neighbor Totoro and released it on VHS in 1993. While Fox now had the U.S. rights to one of Studio Ghibli’s most popular films (and mascot character), Studio Ghibli had also attracted the attention of another company whose history had so many parallels. 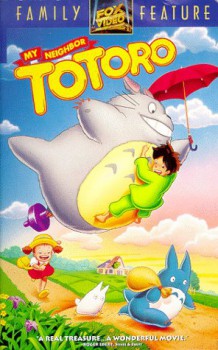 Myazaki was looking for a way to pay back Tokuma Shoten for their investment, since animated films were so expensive and Ghibli was averaging about one film every two years. In 1996, Disney and Tokuma signed a complex contract that granted Disney U.S. home video rights to select Ghibli films (the deal excluded Totoro and another Ghibli film that Tokuma didn’t finance called Grave of the Fireflies) in addition to home video rights to all Ghibli films within Japan. With the agreement, Disney also gained international distribution rights for Ghibli’s upcoming film Mononoke Hime (Pincess Mononoke). Disney’s first use of this deal in the Unites States was an English dub of Kiki’s Delivery Service, a European inspired story about a young witch making a name for herself in a small village. Disney was able to assemble an all-star voice cast including Kristen Dunst, Debbie Reynolds, and Phil Hartman, to whom the English language version is dedicated (it was his final film). Kiki premiered in the U.S. on home video on September 1st, 1998, on VHS and Laserdisc. While the name “Studio Ghibli” was absent from the marketing for this release, Disney included an ad for their next release, Castle in the Sky. While the dub was made, Disney scrapped plans for its 1999 home video release. The reasons are unknown, but it can be assumed that Kiki didn’t sell strongly enough to justify future releases. 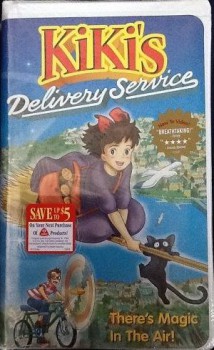