Merida Joins Disney on Ice in Rockin’ Ever After! 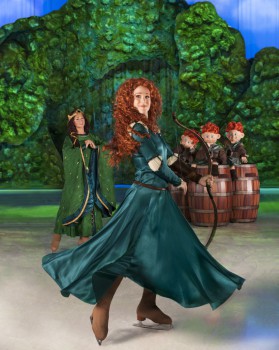 Brave producer Katherine Sarafian’s son has never seen the film she helped create. He was born during the film’s production and was too young to take to see it while it was in theaters. But thanks to Disney on Ice, he’ll now have the opportunity to see Merida, for the first time, in a completely different  way. Pixar’s first princess made her Disney on Ice debut in Rockin’ Ever After, Disney on Ice’s newest show on tour around the US and currently playing right here in the Bay Area (at the Oracle Arena in Oakland through March 2nd). As Sarafian said, “this is actually the perfect first introduction to the characters for him.

Click above to see highlights from the show and our interviews with Brave director Mark Andrews, producer Katherine Sarafian and Disney on Ice’s Gig Siruno

I asked director Mark Andrews if filmmakers kept other representations of their characters in mind while making the film? “No. No. We’re in so deep, it’s such a deep dive, you create her and here she is and she’s born on film. Then we get to see her born again in merchandise and in books then the characters in the parks and now Disney on Ice … it just keeps giving back.” My favorite quote along this vein came from Sarafin who said “Making the movie was this rich experience and then having it out in theaters was amazing. And I thought ‘that was great’. And then it was Halloween and suddenly I saw Merida coming to my door.”

If you’re a Disney fan and you’ve never been to Disney on Ice, you’re missing out on of the unique ways to experience Disney fun. I’ve seen nearly every production in the past decade, and from the music (which is, interestingly enough, not always Disney), to costumes that have to be adapted to work on ice skates, to story changes and stunts, there are always surprises.  Performance Director Gig Siruno describes one such stunt, “when Ariel does this aerial act about 30 feet in the air getting spun by one arm”.  Every Disney on Ice show also has its signature laugh scene, and Rockin’ Ever After’s is presented with the help of Brave’s triplets.

One of the themes in Frozen (an obvious choice for a future Disney on Ice show) that has stuck with me is the notion that true love, even fairy tale true love, can come come from family as it does with the Anna/Elsa sister relationship. But this Sarafian’s quote reminded me that Pixar’s Brave also did something similar in their fairy tale “with the love story being mother/daughter love.”

Having experienced Disney on Ice without kids, and now having taken my 5-year old several times, I can without hesitation recommend any Disney fan get out and see Merida, Mickey, Minnie and all their friends when Rockin’ Ever After comes to a town near you. For more information on tour dates, see DisneyOnIce.com.