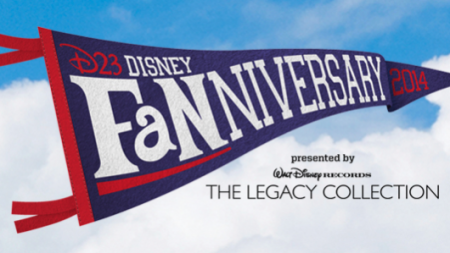 No matter where you are coming from, walking into the Walt Disney Family Museum is a breath of fresh air. Similar to crossing under the berm onto Main Street, U.S.A., you know that something special is going to happen as you continue through your magical journey. Attending the D23 Fanniversary Event on August 16th provided us with another opportunity (excuse) to visit the Walt Disney Family Museum for a magical evening with other Disney Devotees.

After checking in and picking up our D23 Fanniversary “swag” for the event, we were seated in the Fantasia-themed theater down in the lower level. One of the first thoughts that came to mind was how it looked as though the attendance level had increased from last year’s D23 Fanniversary Event in 2013.

Appropriately, the event started off with a 50th celebration of the New York World’s Fair, highlighting the vision and art that was created for Disney’s presence at the Fair. It reminded us of the technological innovation that needed to be developed and what has now become part of our everyday enjoyment.

After the New York World’s Fair celebration, the event progressed through the many celebrated divisions of The Walt Disney Company and each of their achievements for 2014. Beginning with Animation and it’s blockbuster year, progressing through to Disney Parks and Resorts, Television, Live Action, and lastly the 50th anniversary for “Mary Poppins”.

While sharing some of the highlights for the year, D23 would pause every now and then for fun Disney Trivia questions. D23 Members had the opportunity to win different prizes like “I Love Mickey” shirts and lithographs after putting their Disney knowledge to the test.

The event ended with a 50th anniversary celebration of the release of “Mary Poppins”. D23 showed us how close the production team was able to remain to the concept art as they transitioned from concept to reality in some of the memorable scenes of the film. We also watched a video of a recording session with Richard Sherman, of the infamous Sherman Brothers, for a song that never made it into the final cut of the film. D23 informs us that the song, Chimpanzoo, will be included with the Mary Poppins 50th Anniversary CD release later this year.

D23 invited all attendees to standup and join in on a sing-a-long of “Supercalifragilisticexpialidocious”. The event then concluded with an opportunity to get up close to a couple of Disney treasures from the Walt Disney Archives, including the hat that Julie Andrews wore for her role in “Mary Poppins”.

The event was a fun and enjoyable way to celebrate what makes The Walt Disney Company the best entertainment company in the business and it was a great reminder of why we love it. Celebrating at the Walt Disney Family Museum delivers the magic for the San Francisco/Bay Area locals. Perhaps D23 can work with PIXAR Animation Studios across the Bay to add another magical location to celebrate all things Disney…