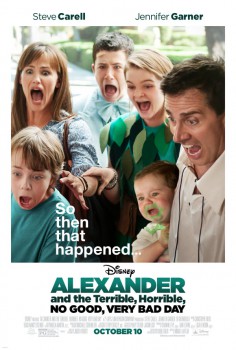 My name is Alexander, Alex for short. As a kid, I had a series of books by Judith Viorst written about a boy named Alexander and I was convinced they were about me. I read them countless times, almost as much as Green Eggs and Ham by Dr. Seuss, and I had a VHS of an HBO animated special based on the first book, Alexander and the Terrible, Horrible, No Good, Very Bad Day. You can imagine my surprise twenty years later when I found out that my favorite company was making a movie based on a book that was obviously written about me. Never you mind that this book was published thirteen years before I was born. Clearly Judith Viorst had a crystal ball and looked into my childhood for her inspiration. My point is some people owe me money for my life story.

On the day that I was supposed to see this film, nothing was going right. I woke up later than planned. I scrambled to finish packing for my weekend trip to Burbank to attend the press conference for this film. On my way to board my dogs, I realized I left their updated paperwork at home and had to go back. Then they informed me that my vet failed to give one of my little poopsies their rabies vaccine. After all that, I was late for work. After a bumpy flight and a quest to find food on a busy Friday night, we made it to the Walt Disney Studios for our screening. Basically, I was having a #VeryBadDay.

As the film began, it was comforting to see that mini-me, played by Ed Oxenbould, was having a worse day than I. From gum in his hair to finding out that the most popular kid in school is having his birthday party on the same night as his, little Alexander’s terrible, horrible, no good, very bad day was ten times worse than mine was. His tensions rise that evening when his family announces their exciting news about the following day: mom (Jennifer Garner) is up for a promotion, dad (Steve Carrell) has an exciting job interview, brother Anthony (Dylan Minnette) is taking his driving test and going to prom, and sister Emily (Kerris Dorsey) is starring in the school play of Peter Pan. At midnight on Alexander’s birthday, he wishes that his family would know what it was like to have a bad day like his… and his wish comes true.

Most of the entertainment value comes from watching the family react to the surprises that await them on their bad day. This review is spoiler-free, but expect the unexpected and expect the results to be hilarious for each family member (including Alexander’s baby brother, who sort of steals the show). Be on the lookout for an uncredited cameo from a Disney Legend who plays themselves. Also expect to walk away humming “You Can Fly, You Can Fly, You Can Fly” from Disney’s Peter Pan.

While audiences will expect a comedy suitable for the whole family, they may be surprised by how touching this film is. Director Miguel Arteta drew inspiration from the works of John Hughes to set the tone for Alexander and the Terrible, Horrible, No Good, Very Bad Day. In particular, 16 Candles where a girl’s family forgets her birthday revealed many parallels to the feelings he wanted to get across to audiences, but it also evokes similar emotions from Uncle Buck. The end result of everyone’s bad day is that they are still there to support each other as a family. And Alexander’s lesson (not a spoiler, it’s in the trailer) is that you need the bad days to make the good days seem special.

This film carries a PG rating. If you have little ones who love to repeat things, it’s best to wait a few more years to see this film with them. However, Alexander is a real treat for modern movie audiences where live-action family comedies are a rarity and often fail to please the whole family. This one has great pacing, great performances, interesting characters, and plenty of jokes that will leave both kids and adults laughing. In fact, there’s a great deal of humor aimed solely at adults and you may find yourself laughing harder than kids in the audience. These adult-aimed scenarios are over kids heads, but one in particular will leave you laughing so hard that you might just pee a little (hint: it happens towards the end of Alexander’s birthday party).

Disney Trivia: This film has the longest name in the history of Disney movies (condolences go to The One and Only, Genuine, Original Family Band for losing its bragging rights).