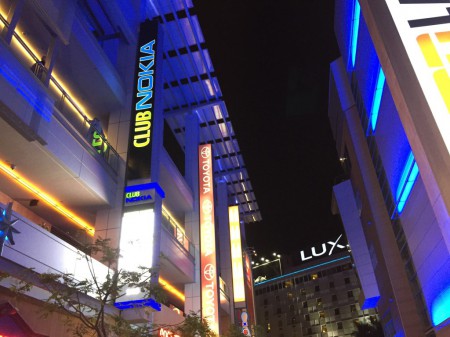 Radio Disney celebrated its 18th Birthday by throwing a concert on November 22, 2014 at Club Nokia in Los Angeles, California. The evening was hosted by Zendaya, Alli Simpson and other Radio Disney personalities. As I arrived for the first artist the vibe in the club was much calmer than expected. Not all audience members had arrived yet, but the people who were watching  the first artist, Christina Grimmie, perform were attentive and fairly quiet considering this was a concert.  Grimmie performed her set with just her vocals and a keyboard. She sang a cover of Drake’s song “Hold on We’re Going Home” as well as her original song “Must be Love”.

At the end of Grimmie’s set she was invited to sign a giant Radio Disney Birthday card which would later be signed by every guest after performing on stage.  The people who were in charge of getting the artists to sign the card seemed to have one of the best gigs you could ever wish for. During the concert they simply sat among the artists on stage in their retro bean bag chairs eating popcorn and clapping along. It looked like a rather nice gig to me.

Next up was Leslie Grace who adorned the stage with her sequined Minnie Mouse ears. She was one of my favorite performers of the night. She appeared to be genuinely excited to be there and had a natural stage presence. Grace delighted the audience with the songs “Will You Still Love Me Tomorrow” and “Nobody Else Compares to You”. The energy in the room definitely seemed to be picking up, but it still wasn’t at full concert level.

Soon after I was quickly reminded of the high pitched screams that can only be produced by the mouth of a teenage fan girl. These were the sounds filling the room when Jacob Latimore entered the stage. Latimore has had success in movies like “Maze Runner”, but he also has a music career that delights teenage girls. He had the girls swooning while he moved like Michael Jackson singing “Heartbreak Heard Around the World”. Between the acts the hosts would return to stage asking questions and playing trivia games. One lucky winner even walked away with a guitar signed by all of the artists appearing.  The night continued with performances by The Vamps singing “Somebody to You” and Olivia Holt’s “Carry On”.

One of the things that I enjoy doing at concerts is watching audience reaction. On this evening I had the pleasure of seeing two extreme cases in the audience. Obviously children often attend these types of concerts with a parent by their side.  Down on the floor level where it was standing room and very cramped, I could see an older gentleman probably in his sixties. This man most likely had no clue as to who he was watching perform, but stood there with his eyes glued to the stage. He seemed completely unaffected by the screaming and bouncing young people cramping his space. That’s a great and patient chaperone.

On the other extreme, up in the balcony there was this young girl who looked approximately ten years old adorning her sequined denim jacket. She was having the time of her life. She was on her feet performing along with the artists on stage with full on arm choreography and vocals. This girl was in her own little world and didn’t care what the people around her were thinking. She made my night. Not only was it hilarious, it was also great to see someone filled with so much joy and not caring what anyone else thought.

My favorite performance of the evening was when Shawn Mendes sang his set of “Something Big” and “Life of the Party”. The screams for Shawn began before he even entered the stage. It seemed like some fans could see him on the wings backstage and started screaming moments before his entrance. Mendes was absolutely delighted by his welcome wailing and delighted the audience with his “aw shucks” personality. One of the sweetest moments of the evening was when Mendes looked at a girl in the audience and sweetly said “Don’t throw that please, in case you hit somebody.” This comment was in reference to a fan getting over-excited and preparing to throw an object Mendes could see getting ready to be hurled toward the stage. 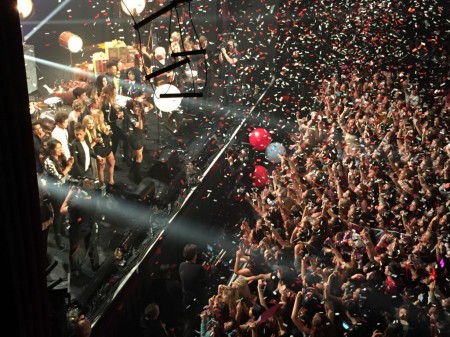 I didn’t think it could get any louder than the Shawn Mendes screams, but I was wrong. Interestingly enough, possibly the loudest shrieks came from the audience for artists that weren’t even live in the building. The howling hit a new high when artists like Nick Jonas, 5 Seconds of Summer and Selena Gomez appeared on monitors wishing Radio Disney a Happy Birthday.

The last songs were performed by R5. They definitely had the longest set of the night including “Heart Made Upon You”, “Loud”, “Smile”, and “I Just Can’t Forget About You” as well as their own special version of the Happy Birthday song. Once they finished their list of songs, all artists who performed that night (as well as the audience) joined in for a cover of American Authors “Best Day of My Life” while giant balloons and confetti went flying over the crowd.

Overall this celebratory evening for Radio Disney ran approximately two hours and seemed to delight the young members of the audience. From what I could see it seemed like a mission accomplished on the part of Radio Disney.

Jeff DePaoli is an entertainer/producer living in the Southern California area. He produces and co-hosts the podcast “Dizney Coast to Coast”. Visit www.DizneyCoastToCoast.com to get your list of “America’s Hidden Mickey’s”. Play along with his “Daily Disney Decisions” every day on Periscope and on his weekly Blab game show “A Spoonful of Disney Debate”. @JeffDePaoli on Twitter/Periscope/Blab/Instagram​