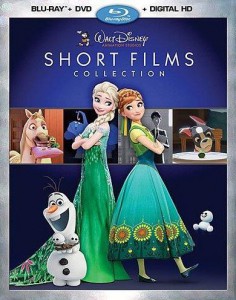 Ever since Blu-Ray first came out, Disney fans have been asking when Disney would reach into their vault of short subjects to give them the high definition treatment. While Warner Bros. has already begun releasing classic Looney Tunes and Tom & Jerry shorts in HD, Disney has saved their classic shorts in HD for Blu-Ray bonus features or digital-only releases. And while this release features shorts too new to be considered classic, it’s at least a step in the right direction. 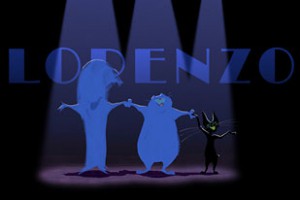 I mentioned that this set has “most” of the shorts from this era. There are several omissions, the biggest ones being Destino, One By One, and the rare Glago’s Guest. While one of the two Prep & Landing shorts is included, the second one (Tiny’s Big Adventure) is not. By excluding Destino and One By One, Disney missed an opportunity to also offer a bonus feature about the scrapped Fantasia 2006, which would have featured both shorts along with Lorenzo and The Little Matchgirl. They could have even offered a separate play list with the four shorts plus storyboard concepts for what wasn’t produced. Perhaps they are saving that for the next time they release Fantasia (fingers crossed).

Without Frozen Fever, I am under the impression that this release would never have happened. While Pixar has released two shorts collections over the past eight years, neither felt like such a cash grab as this release which features Anna, Elsa and Olaf outside of the quartet of shorts on the cover, which otherwise looks like it was intended to fit in with the Pixar releases. The set features both a Goofy and a Mickey Mouse short, but neither graces the cover (unless you count the WDAS logo Mickey). And while Pixar’s first short collection in 2007 promised future installments by declaring itself “Volume 1,” this release does nothing of the sort.

Walt Disney Animation Studios Short Films Collection arrives digitally on August 11th and as a Blu-Ray/DVD/Digital Copy combo pack on August 18th (Disney is not releasing a DVD-only version). Playing all of the shorts as a collection gives you the option of viewing them with or without filmmaker introductions. Playing them with the intros gives the total package a runtime of 89 minutes, while excluding these brings it down to 79 minutes.

The shorts are all presented in their original aspect ratios, which vary from as short as 1:66:1 to as wide as 2.39:1. Video quality varies from short to short as well, with all of the computer animated shorts looking excellent. While most of the hand drawn shorts look pristine, How to Hook Up Your Home Theater features noticeable grain. This is puzzling since the film was made in the computer and should have been a direct-to-digital transfer. But instead, this version of the short appears to have been transferred from a film source.

The standard audio track is English DTS-HDMA 5.1 surround. The dynamics vary by shorts, but the majority of them utilize the full range of sound. Other audio options are English Descriptive Audio, French, Spanish and Portuguese.

The disc only has one Bonus Feature, which is listed in the main menu rather than under a “Bonus Features” section.

There is a digital-only bonus feature that is exclusive to Disney Movies Anywhere. You can access this feature once you redeem your digital copy in either iTunes, Vudu or Google Play. The bonus is Runaway Brain, a Mickey Mouse short from 1995.

Walt Disney Animation Studios Short Films Collection is housed in a standard-sized Blu-Ray case with the Blu disc on the right, DVD on the left. Inserts include a code to redeem your digital copy/Disney Movie Rewards points and an ad for Disney Movie Club. The case is housed in a foil embossed slipcover.

The disc opens with ads for Disney Movies Anywhere, Aladdin Diamond Edition, DisneyNature Born in China and an anti-smoking PSA starring characters from Pinocchio. Selecting “Sneak Peaks” from the menu ads a promo for Disney Movie Rewards before repeating the same ads again. The menu features concept art and maquettes from the shorts in this collection. 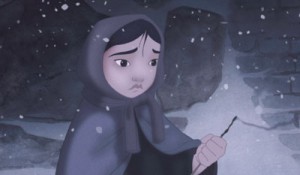 t’s wonderful to finally have a collection of shorts from Walt Disney Animation Studios on Blu-Ray, even if it is missing a few shorts. This disc offers a wide spectrum of entertainment offerings from sophisticated and sad to slapstick and happy, trying to please everybody. There’s something for everybody in this release, but parents hoping to use this as a babysitter while they get things done may find their kids crying during The Little Matchgirl or bored during Paperman. I sincerely hope this release opens the door for some of the classic Mickey Mouse shorts and Silly Symphonies to see their time to shine in HD.