Welcome, Foolish Mortals, to the Laughing Place’s Book-tacular Haunted Mansion book review! Follow your ghost host (or ghost narrator that is) for a review of two popular and easily accessible Haunted Mansion works. In this article, we will take a look at two excellent Haunted Mansion books, one that retells the brainstorming, creation, and evolution of this frightfully beloved attraction and another that treats readers to a fantastical view of the world of the Haunted Mansion ghosts. So…look alive! 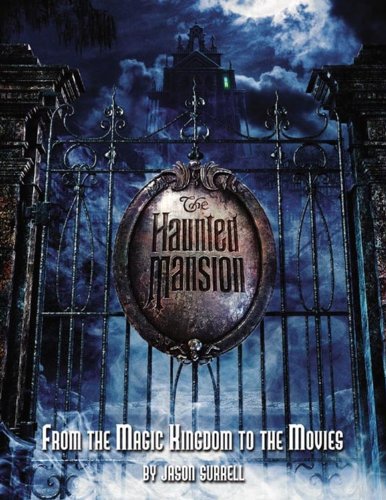 Our first ghostly tome, Haunted Mansion: From the Magic Kingdom to the Movies (published in 2003) is an official history of the Haunted Mansion attraction. Now, while people either love or hate that movie, do not let your feelings for the Haunted Mansion movie starring Eddie Murphy influence your decision to read this book! Haunted Mansion: From the Magic Kingdom to the Movies authored by Jason Surrell, former Disney Imagineering show writer and producer, is an excellent introduction into the interesting and storied history of Disneyland and Walt Disney World’s Haunted Mansion attraction. For those unfamiliar with the author, Surrell has written numerous behind-the-scenes attraction books including, The Disney Mountains: Imagineering At Its Peak (2007), Pirates of the Caribbean: From the Magic Kingdom to the Movies (2005) and others. All of Surrell’s books are packed full of little-known details, first-hand accounts, interviews with original Imagineers, and stunning artwork. I would like to note that just recently this past August, Disney Editions published a newer updated version of this book entitled The Haunted Mansion: Imagineering a Disney Classic. One of the main difference between the two books is the movie section has been left out of the newer edition. Also, there is an additional chapter featuring Hong Kong Disneyland’s Mystic Manor.

Surrell’s Haunted Mansion book does not disappoint! I love all the early concept artwork included, pictures of Imagineering legends working on the attraction and aerial excavation snapshots. However, what I feel is the absolute best part of the book is the detail Surrell takes in exploring the background stories of all the Haunted Mansions that appear throughout the globe. I was shocked to learn how different the stories seem yet how over-arching theme influences all the attractions. So, where does the movie part fit in? At 131 beautifully colored pages I would roughly estimate that only 10% of the book’s content deals with the movie and that small percentage is actually pretty neat. Surrell takes a broader look at the film and delves deeper into the costuming, make-up work, and special effects. Pick up your copy of Haunted Mansion: From the Magic Kingdom to the Movies and relive your favorite attraction from your comfy chair at home. Our second selection veers from the realistic into the fantastical. Before Marvel’s Disney Kingdoms Haunted Mansion comic, there was Slave Labor Graphics (SLG) release of the bimonthly comic, The Haunted Mansion. There were a total of seven issues released, with an eighth never reaching publication. Each issue featured four to five individual tales about the Haunted Mansion backstory and its 999 happy haunts. In December of 2007, SLG released a beautifully stunning hardback anthology that featured all of the published Haunted Mansion comics as well as a clever introduction by Master Gracey and some unreleased artwork. This 175 paged romp through the Haunted Mansion comes incased in a hard bound book sleeve featuring some of the cover artwork from the comics. Inside the book sleeve, the actual book looks more like a journal (perhaps Master Gracey’s journal?) with black binding and gold colored letterings. There are a total of 26 comics, each written and often illustrated by different individuals. The true success of this graphic novel is that each imaginative story is created using both popular and unknown Haunted Mansion characters. Despite the fact that these eerie tales are not part of Haunted Mansion cannon, each unique account feels believable and fits with in the spooky walls of the mansion. There are also many hidden nods throughout the individual comics to the Imagineers who built the attraction as well as the attraction itself.

The Haunted Mansion: Volume One Welcome, Foolish Mortals is a monetary investment as it is no longer in print and readily available. The graphic novel can be found from sellers on the internet and the going rate is around $46.00. At first, I was wary about spending this amount of money on a graphic novel I never read nor heard of. So, instead, I purchased the first issue of The Haunted Mansion to see if I like it. Once reading the issue, it was a no brainer to spend the money for the anthology. If you are a fan of the attraction, find the graphic novel, spend the money and enjoy.