For the first time, the entire audition-to-runway process was recorded as a docu-series on Comic-Con HQ, a novel video-on-demand channel. Also new this year was also an open call audition at Hollywood & Highland a few months before Comic-Con. Contestants had an opportunity to present their designs, explaining their ideas in front of the panel of judges. 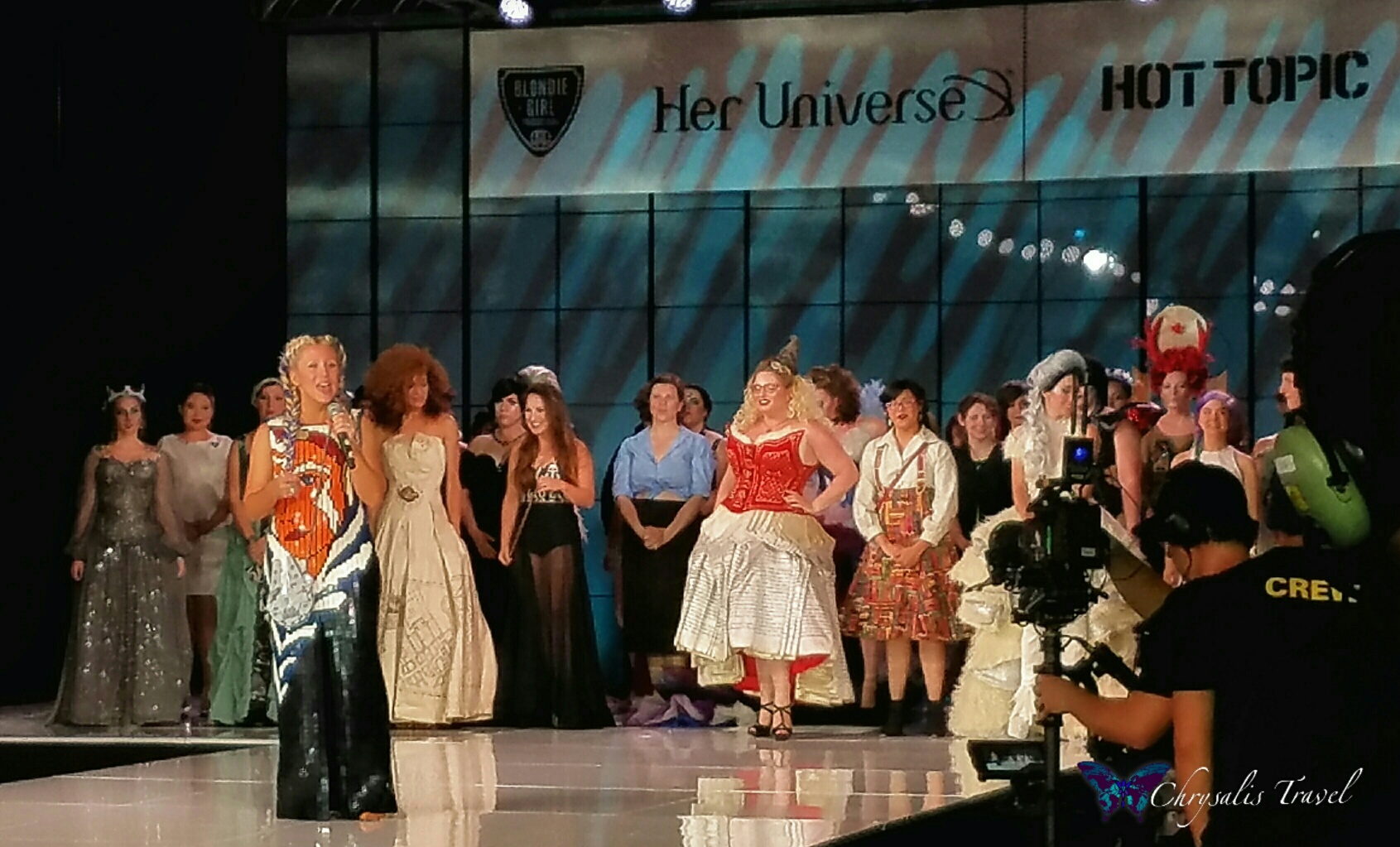 Winners of the Fashion Show receive an opportunity to develop their own fangirl clothing line in collaboration with Her Universe, to be sold exclusively at Hot Topic stores nationwide.

In previous years, there were two winners of each fashion show: one Judges’ Choice, and one Audience Choice. This year, a third winner was announced on July 28, 2016, based on voting online with Comic-Con HQ.

Ashley Eckstein has been a popular on-screen and voice actor, with screen credits including Muffy from That’s So Raven, and Ahsoka from Clone Wars and Star Wars Rebels. During recording for Clone Wars, Ashley noticed that there really wasn’t anything for her to wear except for boys’ T-shirts when she wanted to show her fandom. 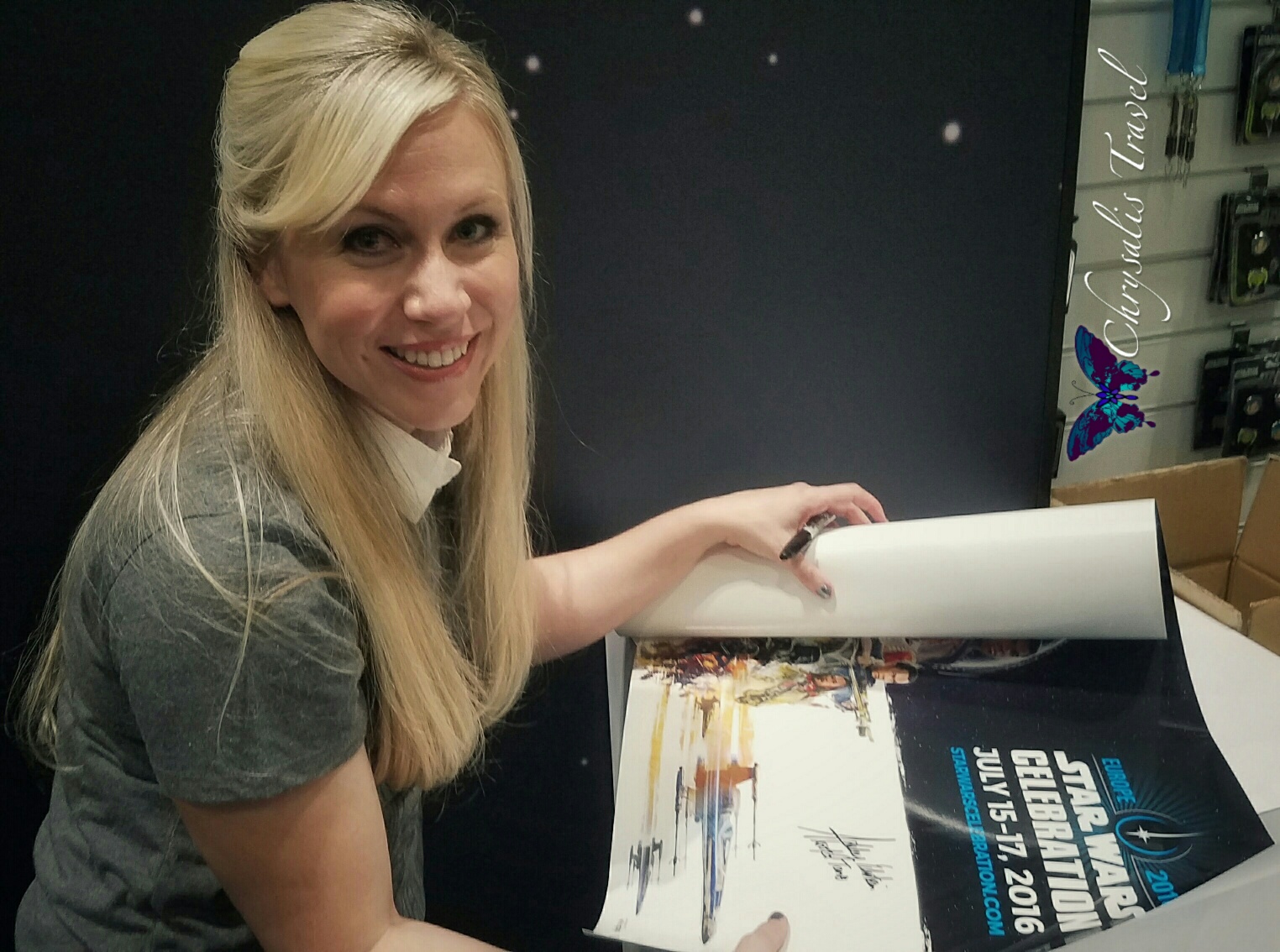 Ashley set out to create a Star Wars clothing line for women and pitched this idea to Lucasfilm, who turned her down. She did not have enough experience creating a clothing line.

This did not discourage our favorite Fangirl. Ashley did her research, partnered with The Araca Group (a merchandising and production firm), and pitched her idea again. In 2010, Lucasfilm granted Her Universe a license. Eckstein discovered that fangirls are very passionate, and she had just tapped a unique niche for geek chic. From there, Her Universe has expanded licensing to include Marvel, Star Trek, Dr. Who, and Studio Ghibli. Fashions range from dresses, cardigans, fashion tops, jewelry, sportswear, and more. Her Universe fashions can be found at Disney theme parks, Hot Topic, Think Geek online, and Kohl’s retailers across the country. In addition to the Fashion Show, Ashley Eckstein’s entrepreneurial endeavors created Her Universe Press, creating opportunities for fangirl writers to publish their empowering messages. 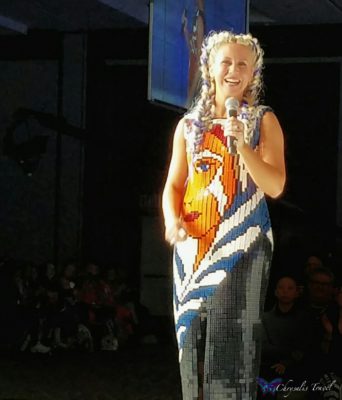 What is a Fashion Show without fashion? Ashley’s couture gowns, designed by Andrew MacLaine (Her Universe Audience Choice Winner 2014), have been the cutting edge of Geek Fashion since 2015. This year, Andrew set new records.

Collaborating with renowned LEGO Master Builder, Nathan Sawaya (a Judge in the show), Andrew MacLaine created a stunning Ahsoka LEGO gown. This is the first couture gown made of LEGO bricks in fashion history. 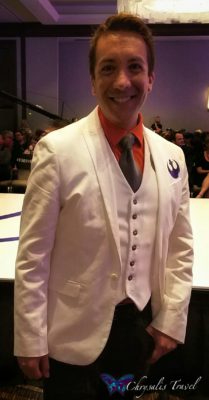 The idea was similar to creating a sequined gown, only using LEGO bricks instead of sequins. Maclaine described stacking the LEGO bricks eight at a time and drilling two holes through each with his Dremel. He then sewed each brick on like a button.

s and stretched 3 inches because of the weight of the bricks (Andrew altered the dress to the correct length). MacLaine hid a carefully tucked zipper in the back of the dress and admitted that Ashley could not sit down while in the gown.

The result was stunning – the LEGO bricks glittered under the spotlights, giving an elegant look resembling sequins in a couture gown. Ashley’s hair and makeup completed the look, transforming her into Ahsoka for the evening.

Geek fashion has arrived and is influencing runways of the fashion world.

Highlights from the Fashion Show

27 contestants showed off their Geek Couture designs with themes ranging from Star Wars, Game of Thrones, Pokémon, Harry Potter, Mad Max, DC comics and more. Each contestant showed a brief video sharing their inspiration for their design, then the model had the runway to showcase the design.

The transforming dress was popular again this year, with designs that transformed completely from one look to another.

Adria Sanchez-Chaidez “Diana on the Town”

Wearable tech with custom animated lighting created quite a stir: 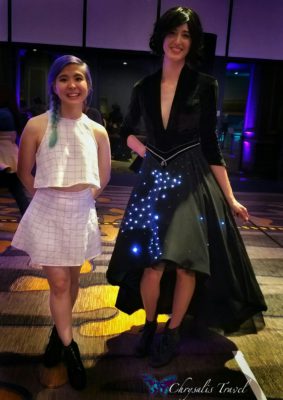 Other gorgeous designs were inspired by Harry Potter’s Patronus, Kylo Ren, and Wall-E. And the Winners Were: 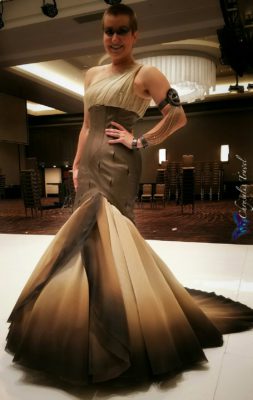 Audience Choice: Camille Falciola for “I Solemnly Swear I’m Up to Couture” a temperature-sensitive-ink dyed dress that made the Harry Potter’s Marauders Map appear while on the runway. 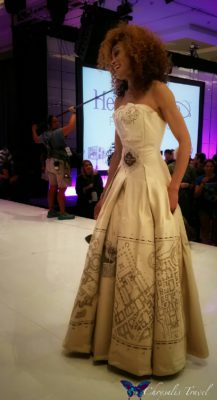 Two winners have been chosen. You can still help decide the third winner! Comic-Con HQ aired the Fashion Show on July 28, 2016, and open voting has begun online for the third winner.

Thanks to Ashley Eckstein, the world of geek fashion has expanded exponentially for fangirls around the world. And we are forever grateful.

What is your favorite gown from this year’s Her Universe Fashion Show? Do you have a story about Ashley you would like to share?

For more information on Hot Topic visit their website.