The lights are not down in The Theatre at The Ace Hotel in Hollywood when comedian Russell Peters takes the stage, and more than half the audience is not in their seats. Rather they are still out in the lobby, getting drinks and socializing. It is clear already that this is to be no ordinary concert. But, then again, the music to Luke Cage isn’t ordinary either. While most superhero films and TV shows rely on epic sweeping scores, the score to Luke Cage is rooted in hip-hop, jazz, and Ennio Moricone. Music is one of the defining features of Luke Cage, a black superhero living in Harlem, because the history of Harlem is one that is forever bound to music. Luke Cage: The Live Score at The Theatre at The Ace Hotel

And on the night of October 6th, the audience, who was starting to take their seats, was ready to celebrate the music of Luke Cage. Comedian Russell Peters warmed up the crowd and then introduced fellow comedian and improv legend Wayne Brady. Brady soon had the crowd gasping for breath with a hilarious freestyle rap about a debt-free superhero. Peters and Brady then introduced the night’s 40-piece orchestra, led by the show’s conductor Miguel Atwood-Ferguson.

But it wasn’t until Adrian Younge and Ali Shaheed Muhammad walked on stage that the crowd truly applauded. Along with being the composers of Luke Cage, Younge and Muhammad are both music icons in their own right. Adrian Younge is a composer known for his works of psychedelic soul and his work with R&B legends including The Delfonics, who appear as performers in episode 9 of Luke Cage. Ali Shaheed Muhammad is most well known for being a member of the hip-hop trio A Tribe Called Quest, who’s music in the ‘90s earned them two nominations for best rap album.

Younge and Muhammad were brought on by showrunner Cheo Hodari Coker to craft the score for Luke Cage. For those “in the know”, this was a good sign, and it was clear the audience at the concert that night was very much “in the know.” As the crowd whooped and called out to them, Younge and Muhammad greeted them with incredible gratitude. Thanking the audience for being there to celebrate the music that they worked so hard on. They even noted that not a lot of film composers get the chance to perform their music for an audience. It was even better that the orchestra was the same one that was used to record the music for the show itself.

“Well we’ve got a lot of music to play,” said Younge, as he stepped behind his percussion and keyboard setup. 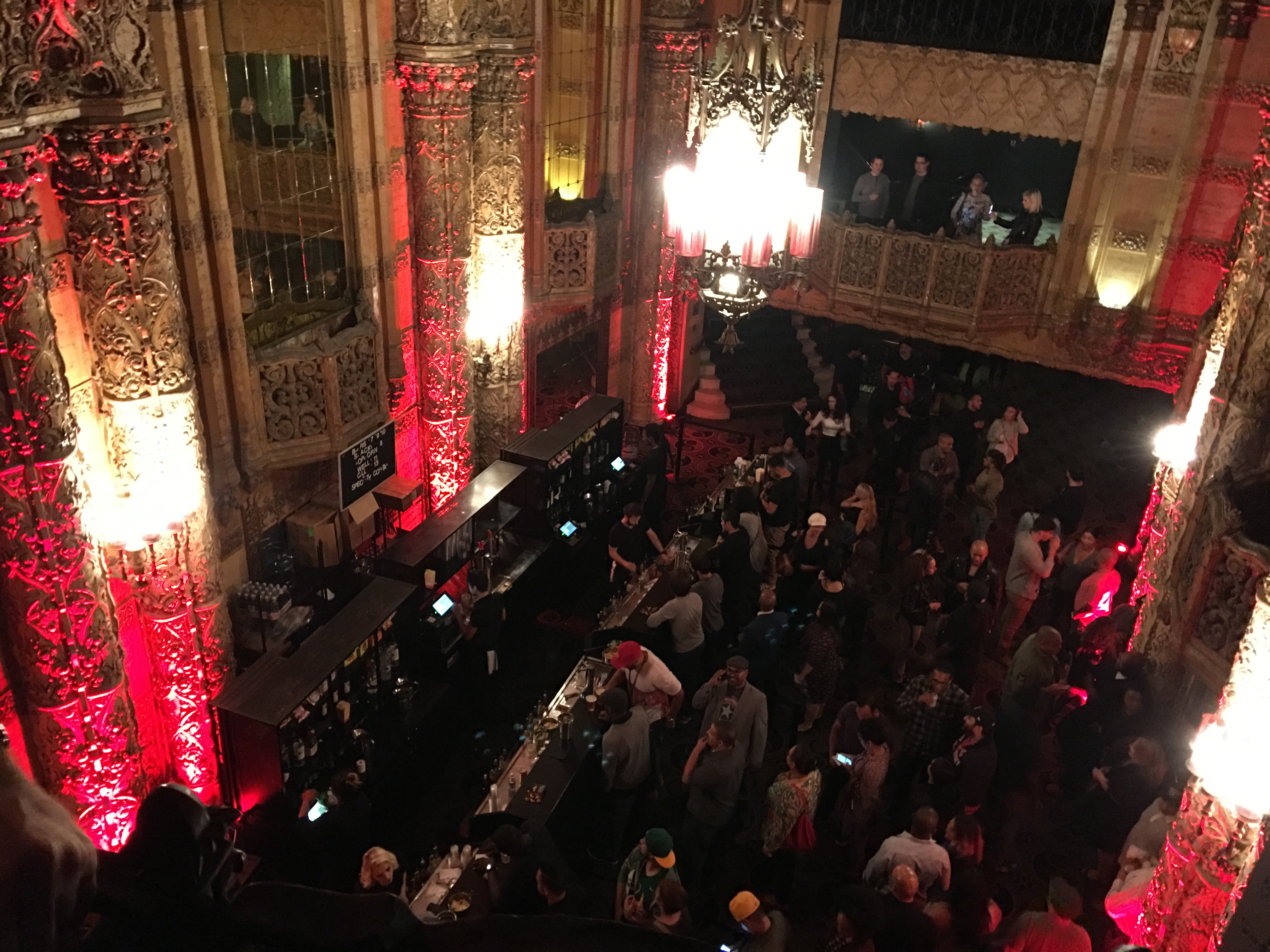 The crowd grabs drinks and snacks before the concert begins. DJ No I.D. opened the concert with a live set. 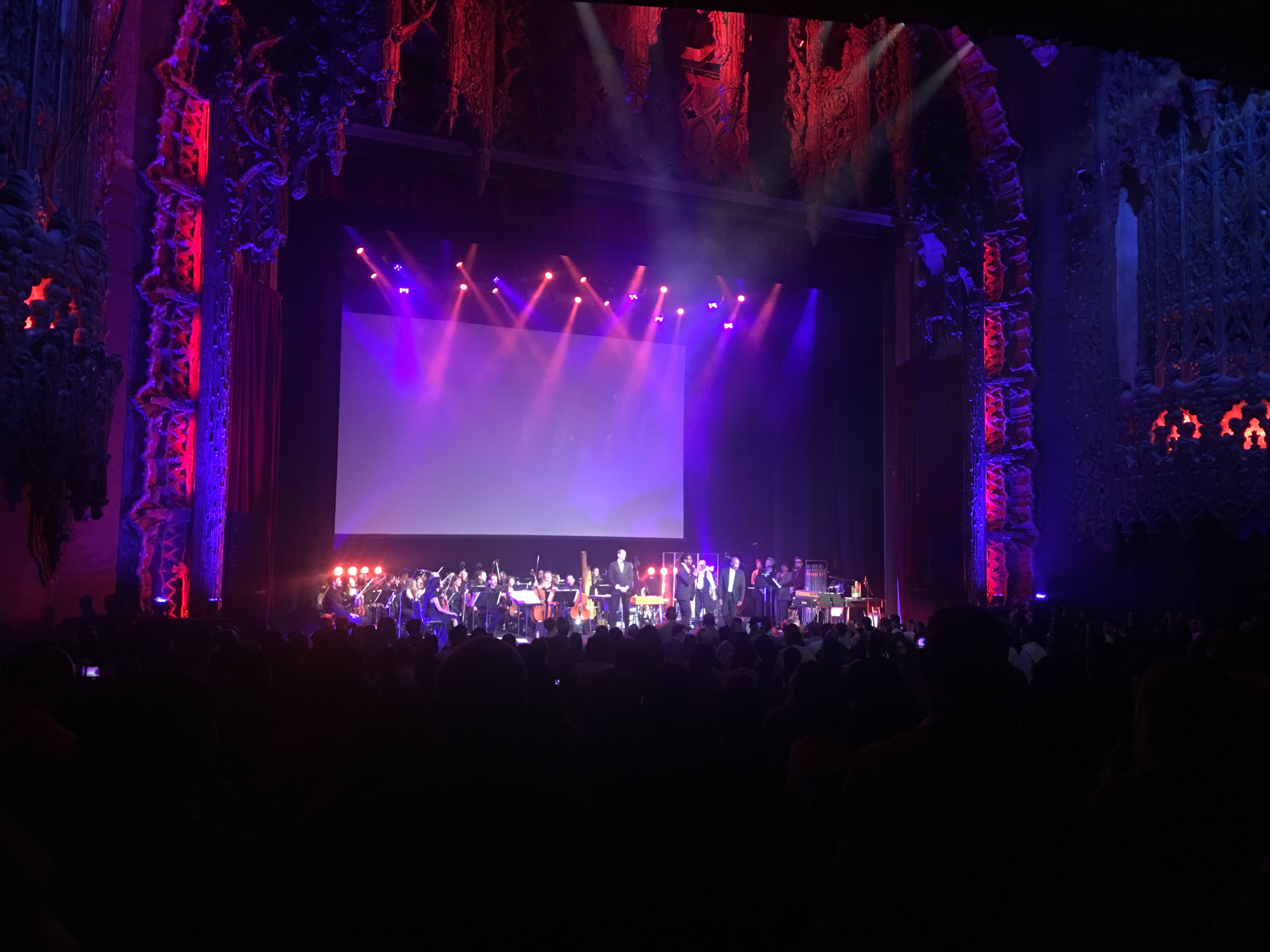 The lights dimmed, and the music gunned off at full speed with the funky guitar-drenched theme song to Luke Cage. From there, the orchestra went through the diverse collection of pieces that comprise the score, which blends and works with genres like hip-hop, electronic, jazz, soul, and blues. But no matter what the song was, you could be sure it included some impeccable drum work.

A number of the songs were accompanied by singers, who would croon operatic notes for impressive amounts of time, and in one notable instance, a singer took the stage simply to provide what can only be politely described as sensual moaning and received a standing ovation. Adrian Younge explained that each of the singers represented a character or more than one character, so when a piece was focused on a particular character it would feel unique to them.

The nature of the music of Luke Cage is that it doesn’t consist of many fully fledged songs, rather music mostly comes in the form of themes and incidental pieces. But this created an optimum set up for a concert, as the orchestra would play powerhouse riffs for 30 seconds to 2 minutes, receive a raucous applause and then blast right into the next piece. Each individual track transported the audience to a particular scene, character, or emotion.

At one point Adrian Younge halted the show in order to preface the next song. He revealed that the song, “Requiem for Phife”, had been created and recorded following the death of Ali Shaheed Muhammad’s former bandmate MC Phife Dawg. Muhammad expressed that it meant a lot to him to be able to go and create something, especially at that time. And once the four-minute song had finished, many people were wiping tears from their eyes.

At the conclusion of the concert, Younge and Muhammad once again expressed their gratitude to those who had made the creation of the music possible, including The Disney Studios who provided the orchestra for them. They then brought Showrunner Cheo Hodari Coker onstage to present him with a custom Luke Cage guitar as a “thanks” for his work. The orchestra then picked up with one last song, the show’s foot tapping end theme.

You can pick up a copy of the Original Soundtrack Album to Luke Cage now, and it is available for streaming on most services. When checking out the album, take a listen to my favorite tracks, in no particular order:

Also, take a listen to the single that Younge and Muhammad made with Method Man, “Bulletproof Love”, that he performs in episode 9 of Luke Cage.