One of the literary joys for me in the past few decades has been finding a new Star Wars story in the form of a novel. Of late, the Disney Book Group (DBG) has been making my fanboy heart beat wildly with their very serious approach to these books. Whether it be transferring the Star Wars saga from film to novelization (at the hand of Alan Dean Foster, R.A. Salvatore and Terry Brooks) or introducing a new tale into the Galaxy Far Far Away (imagined by James Luceno or Timothy Zahn), we have been getting high-quality sci-fi/fantasy authors. The DBG approach to the book world of Marvel has been just as engaging. Black Widow: Red Vengence was written by young-adult superstar Margaret Stohl, and the comic book-to-novel hit parade continues with a new Iron Man book, The Gauntlet, by none other than best-selling author of Artemis Fowl, Eoin Colfer.

Let me say this early: if you are worried at all about a visual medium like comics or film being inadequately represented in a novel, you have my permission to leave those worries behind. The Gauntlet conveys every bit of tech wonder and action that the screen or panel delivers in The Avengers movies or Iron Man comic books. Colfer paints a wonderful gadget driven story that fully engaged me from page one. 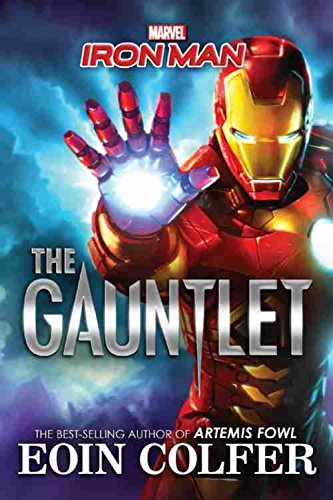 The story begins with a flashback (not unlike Stark’s introduction in Captain America: Civil War) to one of Tony’s teenage memories of his father, one which continues to push forward our understanding of Stark as a man; despite tremendous achievements of his own he continues to live in his father’s shadow. The darkness comes from inadequacies as well as fear, fear that Tony will fail to atone for his father’s industry of bomb making. These hints are peppered all through Iron Man’s current runs in paper and film, and so it is no surprise to see it pop up in the book. What Tony comes to learn is that despite his best efforts to change the direction of Stark Industries’ product, he and his loved ones will always be haunted by the promise of violence.

Stark is going about his own version of vigilante justice by removing dangerous Stark Industry weapons from the grip of evil men when he is sidetracked by a very trusted source: Friday (his artificial intelligence replacement for JARVIS). But Friday isn’t who she seems, and her attempts to manipulate Iron Man to take on a mission she deems necessary are thwarted by a very worthy opponent (one that shall remain secret so as to preserve the surprise). Betrayed, alone, and imprisoned, this adversary brings Tony about as low as we’ve ever seen him.

To be fair, once Tony is stripped of his Iron Man suit, it reminded me a bit of Iron Man 3, where Tony had to realize that Iron Man isn’t the suit, but rather the man inside the suit. That theme isn’t alluded to heavily in the book, but it is definitely there. The high points do come from seeing Stark rise from the ashes and administering the hard justice we expect him to deliver.

Colfer does a great job of managing the young-adult angle of the story. There is definitely a heart-tugging sub-plot that I expected to find in a YA book, but it isn’t overly obvious. Certainly, I was relieved to find that there were no romantic over/undertones in the book…a nice break from typical plotlines in the genre. Colfer shines with his understanding of Stark’s snark — Tony’s banter with all characters is quick and witty. I could easily picture Robert Downey, Jr. speaking the lines (something I may have to get over if the rumors of a new Iron Man pan out to be true. I guess Downey, Jr. can’t play Iron Man forever, and Marvel certainly won’t give up on the character just because Robert retires). Colfer says in the book jacket bio that he was drawn to the character, “I’m a smart aleck, and the character is a smart aleck.” What’s inspiring is the banter is fun but not negative, and moves along with the story. Sometimes the good-guy/bad-guy repartee can get tiresome or even stall the action, but Colfer avoids that.

A fun side benefit from Colfer, an Irishman, writing these books is that the story is set near Ireland, and so we are introduced to some Gaelic names that may be new to readers. Further, Colfer takes the time to suss out the pronunciation of these unique names and consonant clusters. Never a bad thing to learn something while reading, is it? (Go ahead, try to pronounce Saoirse without help, I dare you!)

I feel the need to add the PG-13 warning here—the book is violent. There are very accurate descriptions of fighting and damage, to property and persons, so be careful that readers are of age and that they are ready for that.

We won’t see Iron Man on screen until Avengers 3 (Infinity Wars!!!), but with quality stories like The Gauntlet being produced by A-list authors like Eoin Colfer, there’s no hurry.