A Closer Look at Christmas Celebrations from Tokyo DisneySea Have you ever wondered how Christmas is celebrated around the world? What are your favorite Disney traditions during the holidays? Join us on our journey through Tokyo DisneySea, as we share their “Christmas Wishes 2016.”

Tokyo DisneySea is one of Disney’s most unique Parks – the only one with a purely nautical theme. Celebrating its 15th anniversary, Tokyo DisneySea sparkles with a crystal “Year of Wishes” theme.

The Christmas season officially began on November 8th, 2016 with the premiere of the holiday shows and parades.

Disney Resort Monorails get you in the holiday spirit The Disney magic starts as soon as you board the monorail. Mickey Santa hats decorate each hand grip and add a whimsical touch. Banners on the monorail read “Merry Christmas 2016.”

Each monorail station has unique seasonal decorations. Tokyo DisneySea’s station has a blue theme on this tree. Tucked underneath is a large crystal (part of the crystal Wishes theme), and a Mickey and Minnie ‘SnoSnow’ with their own personal monorail.

As you step through the entry arch, “Buon Natale” banners celebrate Christmas in the Mediterranean Harbor Italian theme. Mickey, Minnie, and friends herald the holiday season as you continue in through the park.

Christmas on the American Waterfront Many of the decorations at Tokyo DisneySea center around the American Waterfront with its massive Christmas tree. The lowest branches of the tree stand much higher than the guests coming up for a closer look. Tucked underneath are representations of each ‘land’ at Tokyo DisneySea. Minnie’s bow adorns a basket of Duffy-shaped cookies. The Cape Cod-themed ring toss invites you to play a game. Aladdin, Jasmine, and Sinbad call the Arabian Coast home. Here’s Genie’s lamp and some of Sinbad’s treasure under the tree. Ariel and King Triton from Mermaid Lagoon have contributed a clamshell and strings of pearls. Captain Nemo’s Nautilus is wrapped neatly with a bow under the tree, with Mount Prometheus visible in the background. This gift represents Mysterious Island, the core of Tokyo DisneySea.

“Snow Crystal Illumination” is the theme of Waterfront Park. The Wishes Tree sparkles in silver and multi-hued crystals. Each colored crystal represents a different Wish, with displays throughout Tokyo DisneySea. This tree is a great photo-op near the Tower of Terror. If you look closely, you can admire details in the snowflakes, and each Mickey-shaped crystal. Cape Cod – part of the American Waterfront, and home to Duffy, Shellie Mae, and Gelatoni – is a picture of serenity at sunset (despite the active volcano in its backyard). Evergreen garlands are strung along the fence posts, and the pink-ribboned tree greets guests. Sailor Mickey welcomes you to take a picture alongside the Duffy-inspired tree. Sailing boats and a lighthouse set the mood in Cape Cod. 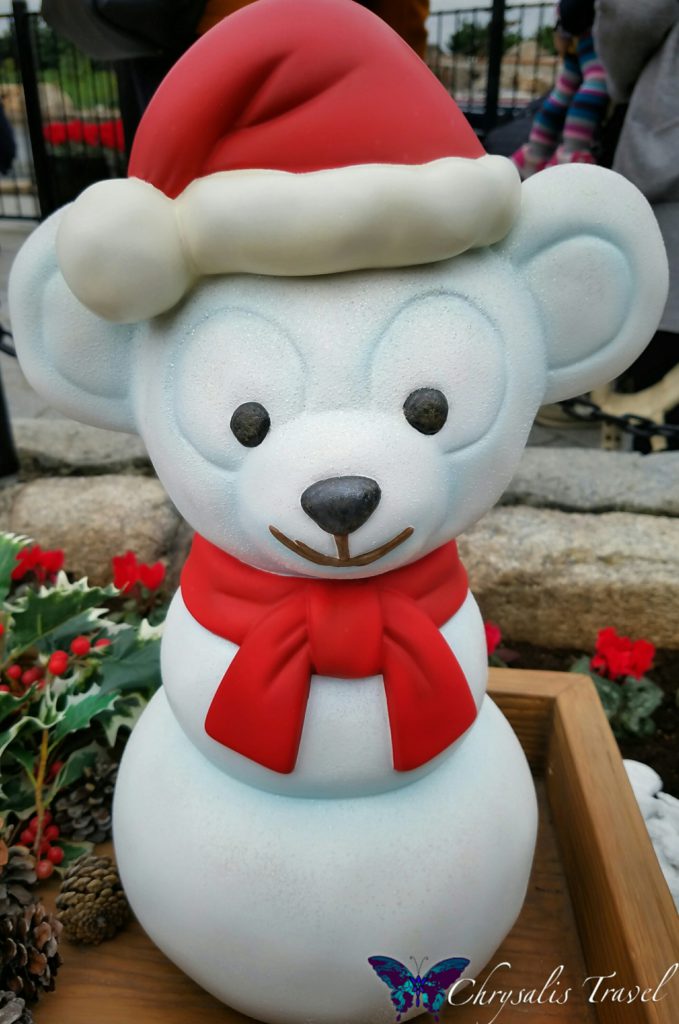 There’s even a Duffy snowman in front of the tree. If you hadn’t noticed: Duffy, Shellie Mae, and Gelatoni (their painter cat friend) are exponentially more popular in Tokyo than they are stateside. They are also exclusive only to Tokyo DisneySea. Duffy and Shellie Mae plush, dressed in their Christmas best, welcome guests to Aunt Peg’s Village Store (aka the Duffy store). On Halloween, they were dressed for trick-or-treating. 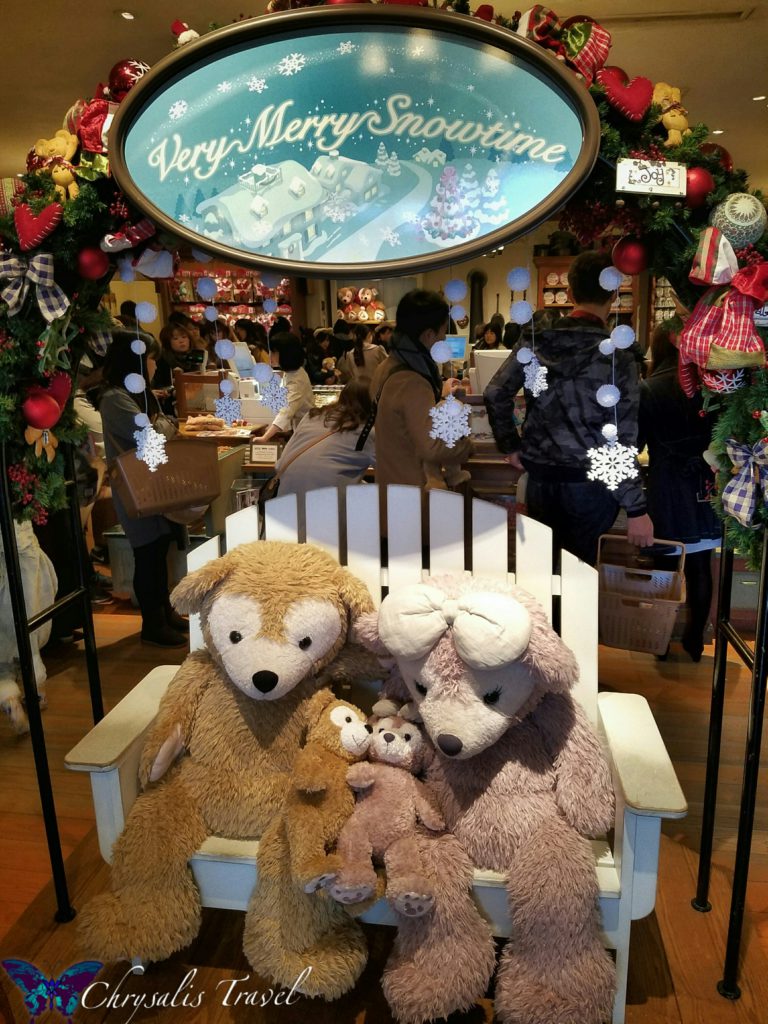 A day later, in a very uncharacteristic lapse in ‘show,’ we found Duffy and Shellie Mae on stage, but not quite ready for Christmas. Duffy fans, dressed in their Duffy parkas, take pictures of their Christmas Duffy collection from years past. Shellie Mae is mobbed as a celebrity when she walks to her meet-and-greet station on the American Waterfront. The queues are typically two hours long to get just one photo with Duffy or Shellie Mae.

Christmas decorations around other lands in Tokyo DisneySea

These colorful moving projections add to the holiday spirit in Port Discovery. Join the “Fiesta de la Luz” in Lost River Delta, and celebrate Christmas with a Latin flair. Donald and Daisy piñatas hang alongside Donald-themed lanterns. A poison-dart shooting native (from nearby Indiana Jones: Temple of the Crystal Skull) has not escaped the Christmas decorations. Mickey and Minnie ‘SnoSnow’ sculptures stand on a patch of snow near the American Waterfront. The main shows/parades at Tokyo Disney are centered around the Mediterranean Harbor waterfront. Amazingly, the seasonal celebrations are added in addition to the regularly scheduled daily performances. Trimming the tree, giving gifts… Duffy and Shellie Mae share their idea of a ‘Perfect Christmas.’

On stage, Mickey and Minnie are ready to celebrate the season. Donald, Daisy, and even Scrooge McDuck join festive dancers center-stage.

Of course, the celebration is not complete without Santa. On the main holiday-themed ship, Santa comes to wish everyone a Merry Christmas. A couple other Transport Steamer Line ships – with Ariel & Eric, Genie with Aladdin & Jasmine, are invited to the party as well.

This is quite a long show. Even with portions excerpted, our video runs over 25 minutes.

The holiday entertainment does not end with two daytime showings of A Perfect Christmas. There is an evening show as well, included with your day-ticket admission.

Colors of Christmas: Nighttime Wishes is scheduled at 7:55 pm. Instead of having a holiday show ‘instead of’ Fantasmic, Tokyo DisneySea schedules Fantasmic earlier to accommodate the Christmas program.

Since it is completely dark by 5:00 pm (even in early November), there are no problems with performing Fantasmic at 5:30 pm. (And, by the way, Tokyo DisneySea’s version of Fantasmic is pretty amazing).

The Fantasmic Sorcerer’s hat is transformed into a 15-meter tall lighted Christmas Tree for this 15-minute show. Mickey, Minnie, and friends are dressed in the colors of their Wishes Crystals. They sail around the harbor on main Christmas ship.

The Christmas tree is animated, changing colors continuously with the music, and providing a fountain show as well. Fireworks and lasers add to the spectacle. One day, with a high likelihood of rain in the forecast, Colors of Christmas: Nighttime Wishes was performed with all the Disney characters in perfectly-fitted plastic wrap. Shiny and dry, Mickey and Minnie waved from atop their ship to many happy fans.

Instead of canceling the show, they found a way to keep the characters safely dry for the performance. The captivating Christmas tree continues to twinkle and change colors along with music for the rest of the evening (the Afterglow), setting a magical mood for guests.

Here’s our excerpted video from Colors of Christmas: Nighttime Wishes:

While there were many special Christmas programs throughout the Tokyo Disney resort, the fireworks: Sky High Wishes did not have a Christmas variant.

We had an enchanting stay at the Tokyo Disney resort, exploring their Christmas celebrations. Did anything surprise you about Christmas at Tokyo DisneySea? What was your favorite part? Would love to hear your thoughts!