Cinematographers in Panda Suits – Behind the Scenes of “Born in China” 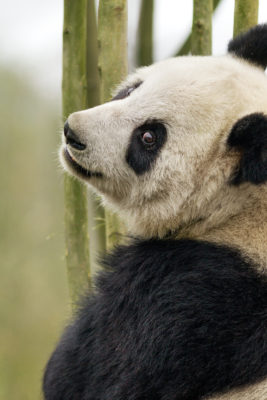 Disneynature returns triumphantly for Earth Day 2017 with Born in China, a film that celebrates four of the incredible species who call mainland China their home. But producing this latest family friendly nature documentary came with many challenges. In talking with producer, Roy Conli, it became clear just how monumental this production was.

“For me, the biggest struggle is that the team is on three continents. My cinematographers are coming out of Bristol, England, my director is coming out of Beijing and I’m out of Los Angeles. I believe there’s an eight hour time difference to London and nine hour difference on the other side so the only time we could all talk together was around 2:00 am Los Angeles time,” he recalls, explaining the difficulties of trying to coordinate schedules to keep the project on track. “But that’s just logistics.”

For Conli, an animation producer whose credits include Disney’s Tangled and Big Hero 6, one of the biggest draws was the chance to work with legendary Chinese director Lu Chuan. “[He] is probably one of the greatest living Chinese directors, great storyteller, and he was on set some of the time. You can’t be on set all of the time because literally we had multiple crews working throughout the country at any one time. So really the unsung heroes here are the cinematographers.” 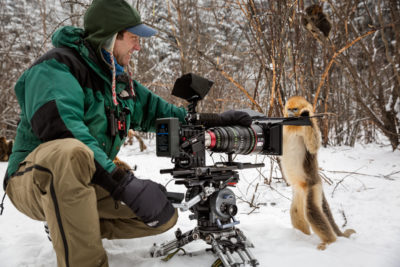 The cinematographers spread out across China to cover each of the four species simultaneously. Being on travel visas created new challenges for the filmmakers on this project. “Shane Moore, who’s the cinematographer on the snow leopard unit, he went out to one of the most inhospitable places on the planet. The Qinghai Plateau is 16,000 feet above sea level. He did not get any shots of snow leopards until his 90th day. He’s on a journalistic visa, it lasts for 3 months so he had to leave the day after he got that first shot.” Luckily for audiences, Shane was able to return on a new visa shortly after to reconnect with Dawa the snow leopard and her cubs.

As with previous Disneynature films, staying through the credits gives audiences a behind-the-scenes glimpse at how these shots were achieved, including some mischievous monkeys messing with the cameras. “We are committed to not interfering with nature. It gets a little hard with monkeys because monkeys are so interested in you and will actually perform for the camera. So in that case you have to work to keep them away from you.” 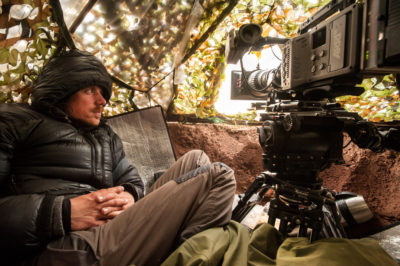 Approaching the pandas, who get star billing on the film’s poster, created a different kind of challenge. “The pandas, sweet, lovable, cute, 800 pounds. So a mother with a cub, you don’t want to get that close to. And they are, as the film portrays, very solitary kind of animals. They like bing alone, so the cinematographers literally donned panda costumes, panda suits, and kind of smeared themselves with panda scent and essentially would get closer than you could to the snow leopard, but had to keep their distance. These guys are brilliant, they’ve been in the field and some of these guys went to Oxford and studied natural history their entire lives so they know what they’re doing.”

The saddest aspects of the “Circle of life” are on display in Born in China, with one of our animal protagonists not being successful with their struggle to survive and provide for their young. “The feeling was that the investment in that story and how people fell in love with [that character], it was important. I looked at it and when we saw the outcome, we were all very emotional. But I also, as a filmmaker, am not afraid of sharing that with kids. I kind of live by what I call ‘The Pinocchio Principle.’ First film that I saw as a kid was Pinocchio and I was terrified and I was scared and I cried, but I think I came out pretty healthy in the end. And I think that in this particular case, when you’re dealing with nature, you have to be honest. And given what kids see after 8:00 at night on the television, I think is healthier than probably anything that they will ever see.” 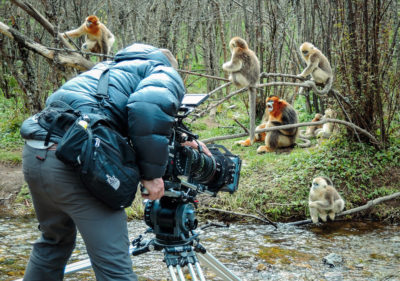 While Born in China is making its US debut this month, it was released last summer in China to great acclaim. “We premiered the film in August in China and [the Chinese Government] was so proud. It is the biggest box office of any nature film that they’ve ever had, biggest box office of any documentary that they’ve ever had. It was great to be there during that time because I met a lot of people, both civilian and government folk, who were so proud of seeing this area that Westerners just aren’t aware of. You know, most of the population of China lives along the coast and you get into the inland areas and even the Chinese don’t get in there that often. These are remote areas and you just don’t take a vacation at 16,000 feet above sea level. This is the highest plateau on the planet, so to share that was great. And what was really cool is that it actually started a dialogue in China about the preciousness of their wildlife and the importance of conservation, which I think is one of the great things that Disneynature does.”

For theatergoers seeing Disneynature Born in China during opening weekend, Disney will donate a portion of ticket sales to the World Wildlife Conservation Fund. These donations will exclusively be used to help populations of pandas and snow leopards in China. “I’m so proud for the Disney Company on what they’ve done on each one of these films. This is something that they’ve done from the very first film. Right now, the company has supported over 130,000 acres of chimpanzee reserve in Africa, 65,000 acres of wildlife reserve on the Serengeti, they’ve got 400,000 acres at US National Parks where we’ve got grants to help 75 animal and plant species that are shrinking, we’ve got a 40,000 acre marine reserve in the Bahamas. So anyone who goes that first week will be contributing to the betterment of this world.” There’s no better way to celebrate Earth Day than by meeting these four amazing species that can only be found in China. And while being entertained and educated, you can also give back simply by choosing to see Born in China April 21st through 23rd.