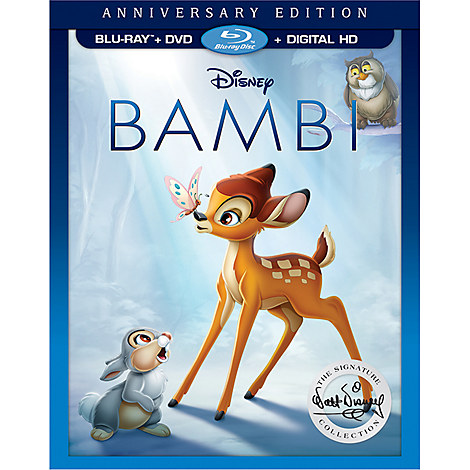 The day started off great with a tour of Walt’s offices. It has always been a dream of mine to see where Walt worked, so I felt blessed to have this opportunity. Designed as an exhibit, it was such an awesome experience to be able to see where Walt had spent so many hours of his life.

We got to go through his secretary’s office and then his working office. Finally, we got to enter Walt’s personal office where he got a lot of his thinking done. All of these offices were filled with authentic pieces of Walt’s time in these offices.

After the tour of Walt’s offices, it was time to head over to a photo op where they made .gifs of us. We all got to choose some props and then stand in front of a floral arrangement and pretend to be Bambi or Thumper.

We then moved upstairs where we got a chance to speak with Donald “Donnie” Dunagan (voice of Bambi) and Peter Behn (voice of Thumper). It was a special moment to be able to hear from them because they are last remaining cast or crew members from Bambi. Both shared a lot of great stories, with one of the highlights being Dunagan showing us some drawings that kids around the world have sent him over the years, saying both he and Behn receive multiple per month. It was a touching moment that showed the true legacy of the film.

Speaking of legacies, the final question of the session was related to what Behn and Dunagan thought the legacy of Bambi would be 75 years from now. Both agreed that the film stands out for its environmental impact. It was one of the first ever environmental films ever made, and its legacy continues today with the Disneynature films.

The final part of the day was spent talking with Disney Animator, Paul Felix. Felix was inspired by the work of Bambi artists’ Tyrus Wong and Marc Davis. He had been asked to create a piece to celebrate the anniversary, which you can find below. Felix did an incredible job on the piece because Bambi and Thumper look fantastic, and we were all impressed to learn he drew the entire piece in one hour.

Overall, it was a great day at the Studios learning more about this true Disney Animated Classic. Also, a big thank you to Disney for providing me with all of the images that you saw today.

if you want to relieve the Bambi magic yourself, be sure to check out the Walt Disney Signature Edition on Blu-Ray and DVD starting May 23.