After Secret Empire, Sam Wilson is in search of himself, and his place in the world. He starts his new journey in Falcon #1. The corruption of Steve Rogers, the epitome of good, and the battle that Wilson and the Avengers fought to end the Hydra domination has left Sam Wilson putting down the shield, and taking up his wings. 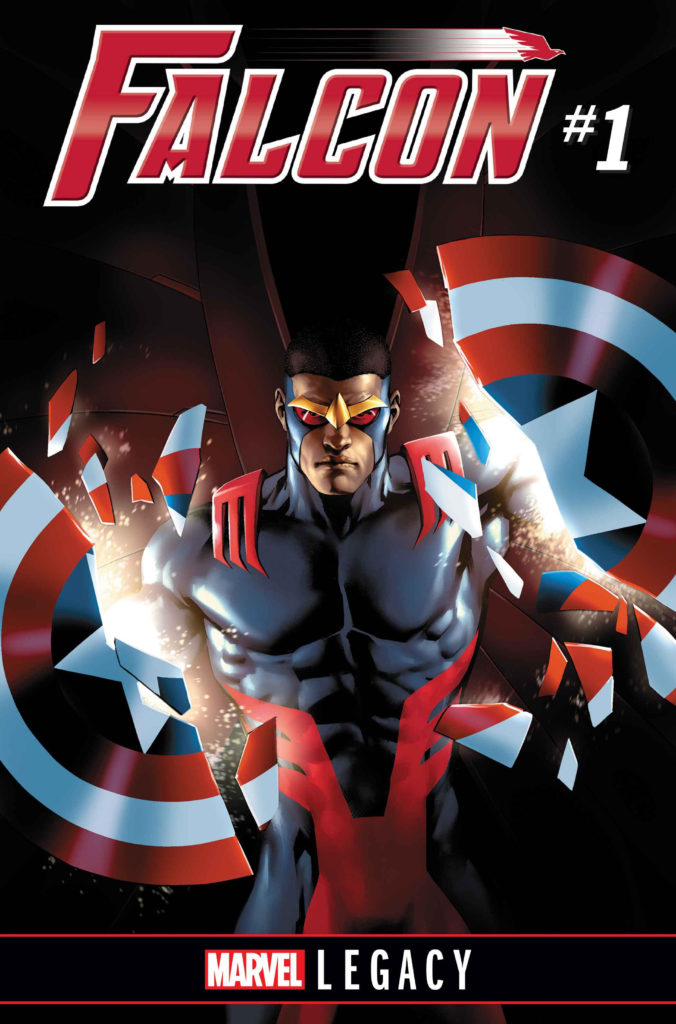 Falcon is flying high and headed for Chicago. With the turmoil of interdimensional beings and cosmic cubes, Falcon has opted to tackle a real problem that was turning the streets of the beloved Chicago into a war zone – gangs.

Together with the help of his trainee Patriot, Falcon sets out to try and bring the two biggest gangs in the city, the Kings and the Rangers, to a truce. Despite protest from the mayor, Falcon gets the gangs to agree to meet.

Unfortunately, even though Sam Wilson wanted to tackle real people problems, he will soon learn that the gang issue in Chicago is far more difficult then expected.

I am so happy to see Sam Wilson back as Falcon. This character is one of my favorites, and to see him put down the shield of Captain America and reclaim his rightful super suit was exciting for me. Falcon #1 starts off with a beautiful picture of Sam Wilson break free from the anchor that the Captain America shield had become.

I liked how this aftermath of Secret Empire has left the characters in search of a new legacy. Sam Wilson has a problem with his past. Being best friends with Steve Rogers and not knowing the treachery that was there, has haunted and hurt Wilson.

Taking to the sky and flying as Falcon is the surest way for Sam Wilson to leave the past behind, and be reborn. Writer Rodney Barnes has certainly given enough space and room for Wilson to share his thoughts, but not overdoing the dialogue with a non-stop soliloquy. By using the real issue of gang violence as a driver in Sam Wilson’s new world is an interesting choice. Is writer Barnes trying to comment on the violence that is plaguing Chicago at this moment? He not only draws attention to the real issues, but he makes Falcon more human and relatable.

One of the reasons that I like Falcon so much is that he is not anything more than just a normal guy with some cool wings. The person that Sam Wilson is, is a role model of the average person who uses what he has for doing good. He is a loyal friend that will fly to the ends of the Earth if necessary. Falcon is the person you want as your best friend.

Seeing him in his own comic, and not really having much action take place, is a great way for readers to reintroduce themselves to the man that is Falcon. Wearing a uniform that is a mix of Captain America and Falcon in Secret Empire diluted the person that was behind the mask. Now its time for the Falcon to fly, and with the incorporation of Patriot, we get to see Sam Wilson mentor the next group of heroes. I really liked the dialogue between the two, it made me feel less like I was reading a comic about superheroes and more about real people. The family dynamic between Falcon and Patriot is another highlight to the comic. Falcon is not being overbearing, but real with his thoughts and feelings, and you see Patriot taking it all in.

One of the best parts of the comic was when Falcon meets with the Kings gang. They try to intimidate him, but it doesn’t work. It is the other gang members who push for the meeting. Artist Joshua Cassara did an amazing job of making the gang members who speak up look more like a collective voice then just one person. Part of the joy I get from reading comics is seeing how the emotions of the text are translated to the visual. Brilliant work on the gang negotiation scene Cassara.

Falcon at one-point talks about how people need hope. The idea of hope seems to be a consistent theme as Marvel comics deal with the fallout of Secret Empire. Many things can be built on hope, and the strength of Sam Wilson, Falcon, is something that can inspire hope in many.

If you want a comic where you get to take some time to understand the motives that lie within the person, pick up Falcon #1. It’s about time that Sam Wilson gets the spotlight all to his own.