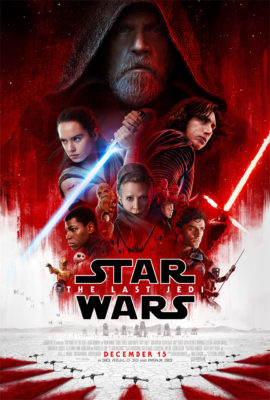 The Lucasfilm logo sparkles on the screen and then darkness. A familiar phrase, “A long time ago in a galaxy far, far away…” And then the moment is finally here, Star Wars: The Last Jedi has arrived. After a two year wait, the theater erupts with cheers and applause as “Star Wars” appears on the screen. Settle in, because as Luke Skywalker says in the trailer, “This is not going to go the way you think.”

This review promises to steer clear of spoilers, but will give you my general reaction to the film. As a fan of the saga, I confess that I got wrapped up in thinking about what Episode VIII would hold. The story takes so many left turns that audiences will remain on the edge of their seat until the credits start to roll, and that’s fantastic. The film hooks you from the very beginning, with what I feel is the most exciting opening sequence (post-scroll) to any Star Wars film ever. It will be hard to top.

There’s been a lot of discussion about how dark this story is and I can say that yes, yes it is. But what Writer and Director Rian Johnson does so perfectly is dance around every dark or intense scene with an equally light or humorous moment. I don’t think I’ve ever laughed this hard at a Star Wars film before and BB-8 proves himself to be a master at comedic timing… the porgs are fun, too. Essentially, the moments of comedy save you from several therapy sessions. Were someone to cut out those fun moments, the film may give audiences PTSD.

Like The Force Awakens, The Last Jedi is a lesson in how visual effects should be done. It features many of the same practical effects pioneered by the original film and while the story will keep you thoroughly engaged, you can’t help but notice how often an alien creature or big effect looks like it was captured in-lens, and many of them probably were. The film features a few all-CG characters and Supreme Leader Snoke in particular has a few uncanny valley moments, but its the only criticism I can give the film on a technical level.

Those who felt that The Force Awakens borrowed too heavily from A New Hope will be pleased to know that The Last Jedi feels very original. There are a few parallels between this film and The Empire Strikes Back beyond just the presence of AT-AT-like Walkers, but for the most part you have to overanalyze to find them. Rian Johnson did say in advance that he was inspired by the look of Empire and I felt it most during many of the First Order scenes.

In terms of acting, every single performer gives it their all. Kelly Marie Tran is the rookie here and I thought her portrayal of Rose was so charming and memorable. I expect big things from her and fans will absolutely fall in love with this character. The film closely follows Rey, Finn, and Poe; Daisy Ridley, John Boyega, and Oscar Isaacs all make you feel like their characters are growing, learning, and evolving right before your eyes. As the second installment of a trilogy, it feels like their lessons learned in The Last Jedi will come into play in Episode IX.

As Mark Hamill said, his role in this film is at least twice as large as his part in Episode VII. All kidding aside, fans will learn a lot about Luke Skywalker post-Return of the Jedi and his performance eloquently balances Johnson’s need for light and dark moments, often in the same scene. Older, wiser Luke also has a few things to teach us about the force.

With Princess Leia being my favorite character from the original trilogy, I became misty eyed during Carrie Fisher’s first scene. I may be too invested in her and perhaps biased, but her performance continues to astound. There are a few snarky moments where the lines between Leia and Carrie are blurred, but she continues to display strong leadership qualities. In a film where the main protagonist is a heroine, she stands her own as a strong leader who opened the door for a character like Rey to headline this trilogy. As Fisher’s final film, I’m glad to see her career end with one of her greatest performances of all time.

There are a few new characters in the film and I’ve already touched on Rose. Know that porgs are adorable and charming and don’t have as much screen time as the marketing suggest. Other new characters also feel overhyped compared to the insignificance of their parts. But unless you’ve already invested hundreds of dollars collecting merchandise for these new minor characters (it’s Star Wars, so you probably have), you likely will forget about it very quickly. At its core, this film is about the established icons of the saga: Luke Skywalker, General Leia Organa, Rey, Finn, and Poe Dameron.

Star Wars: The Last Jedi takes your preconceived notions about what the film will be and twists them into something different, brilliant, and surprising. My first reactions to new Star Wars films are always overly enthusiastic, but I have a feeling that even on my umpteenth viewing, I will still be in love with it. My initial instinct is that I like this film even more than The Force Awakens and in the same way that Empire is the most beloved film of the original trilogy, I think The Last Jedi will be hard to top. Your move, J.J.

I give Star Wars: The Last Jedi 5 out of 5 porg squeals.