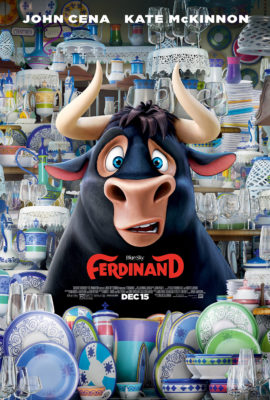 With Disney’s bid to acquire 21st Century Fox, a deal that could take twelve to eighteen months to close, I decided to check out the newest animated film from Fox’s Blue Sky Studios, Ferdinand. It seems more than fitting that within days of the announcement, Fox is releasing an animated film based on a famous children’s book that was previously adapted by Walt Disney in 1938. And so with that, I went to look at a film that Disney could potentially own in the very near future.

I first became aware of Blue Sky’s Ferdinand a few months back when the ad campaign began to ramp up. From the initial trailer, I instantly had flashbacks of Disney’s Home on the Range. In terms of character make up and design, it certainly recalls the look and animal cast of that film. And with plenty of fart jokes in the trailer, the humor seemed on a similar level as well. Thankfully, you won’t find many more of them in the film itself.

The biggest challenge facing the team was that they were adapting a short story into a feature length film, and one that was already expertly and memorably adapted in animated form. I liken it to Dr. Seuss’ How the Grinch Stole Christmas, a wonderful book that made a great animated TV special, but a lousy live action film. However, this is the same studio that made a pretty solid affair out of Horton Hears a Who, so I was optimistic. 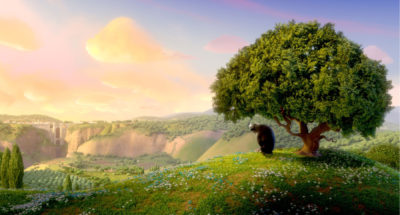 Unfortunately, Ferdinand suffers from not enough plot, creating a weak first and second act. The setup leads to some payoff in act three, but much of the padding feels borrowed, recycled, and overall uninteresting. Its strengths are a few solid and memorable gags, which can be enough to save a short but not a 106-minute feature.

There’s also a certain irony that Ferdinand is released on the heels of Pixar’s Coco, a film set in Mexico with an all-Latino voice cast (and John Ratzenberger) and distinctly Mexican musical styles. Ferdinand is set in Spain and stars John Cena as Ferdinand, Kate McKinnon as Lupe the goat, and Peyton Manning as Guapo, a Spanish bull with a Southern drawl because that makes sense. The songs that underscore the plot are written and performed by Hollywood Records alumni Nick Jonas channeling his inner Phil Collins. While you will find some Latino actors among the cast (Gina Rodriguez and Gabriel Iglesias), they are in secondary roles. Spanish can be heard every so often in reactionary statements by some of the human characters in the film, but overall it doesn’t try at any point to embrace the culture in which the story takes place. All of these choices feel dated and as Hollywood evolves and becomes more culturally aware, I would hope this is the last time we see such an egregious level of whitewashing, or white-voicing, as the case may be. 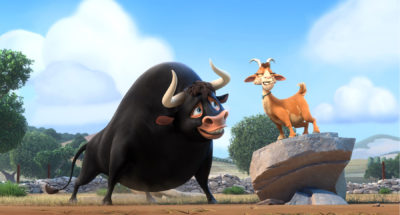 Controversial casting aside, I was impressed with John Cena’s acting performance. I’m not a WWE viewer and the only other work I’ve seen of his is the Tina Fey/Amy Poehler comedy Sisters, in which he played an intimidating muscle mass with few lines. He pulls off the sweet and sincere bull who wants nothing more than to take it easy and smell the flowers, which I imagine contradicts any wrestler’s in-ring persona. The biggest laughs come from Kate McKinnon as Lupe. While the name and voice may not match, the character design and animation yields a much welcome bit of true comedy in the film. I imagine many of her lines were ad libbed by the Emmy winning Saturday Night Live actress.

Fans of the Disney short, Ferdinand the Bull, will be sure to notice that the colors and framing often feel like they’re paying homage to the original. The tree Ferdinand sits under has a jagged swirly pattern in its bark that calls to mind some of Mary Blair’s concept art for Disney films of the 1940’s and 50’s. And a butterfly that appears towards the end of the film looks like it borrows the colors and style of a teacup at the Mad Hatter’s tea party in 1951’s Alice in Wonderland and the Disney Parks spinning attraction it inspired. 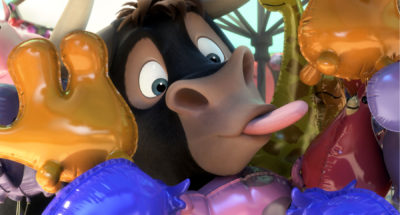 The oddest thing about Ferdinand is that these bulls have been raised to be competitors in bull fights, a deadly sport for the bull that was banned in Spain in 2014. One of the themes is that Ferdinand doesn’t feel like he belongs or fits in to such a competitive environment, but the mentality is that you’re either a fighter or you’re food. The plot even includes a rescue mission in a meat processing plant and yes, it’s as weird as it sounds. The message the film tries to send is that everyone deserves the right to be themselves, but you walk away with questions about humane treatment of bulls and cows by the mere presence of these subjects. The film makes no statement about the sport or where hamburgers come from, but at a certain point you expect someone to say something about it.

Trying to be fair and balanced, I won’t compare Ferdinand to any of the recent offerings from Walt Disney Animation or Pixar, but will hold it against previous Blue Sky projects. I rank 2016’s Peanuts as their greatest film to date, with Horton Hears a Who and Rio in second and third. I would place Ferdinand as their fourth greatest effort, which isn’t saying much as I’m adverse to all things Ice Age and the five films in that franchise make up the majority of their body of work. However, it pleases more than it disappoints in terms of storytelling and comedic ability.

I give Ferdinand 3 out of 5 red roses