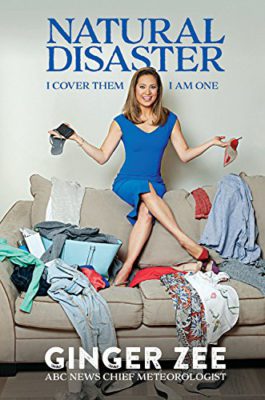 Like millions of Americans, I’ve awoken to the forecast of Chief Meteorologist Ginger Zee on ABC’s Good Morning America more times than I can count. I remember Sam Champion’s retirement announcement and was familiar with Ginger as she was already on the show. Such a bright energy, I assumed Ginger went directly from college to being an ABC intern and her inevitable success as a core member of the GMA team. But in Natural Disaster, her memoir from Disney’s Kingswell book label, you will learn that her climb to the top was anything but quick or easy.

Ginger writes her story like she’s talking directly to you as if you’re her oldest, dearest friend. She’s often very funny, full of wit and insight, and tells her story in the most candid of ways. But the brilliance of Natural Disaster is that she doesn’t tell her story in linear order. You get to know her through some of her most comical faux pas, a young aspiring meteorologist figuring the world out on her own.

The book is called Natural Disaster and the cover also includes the phrase “I cover them, I am one.” Right from the start, Ginger is honest about the mess that her life has been and her story starts with one of several failed relationships highlighted throughout the book. You don’t have to be interested in the science of meteorology to relate to and connect with Ginger. Other areas of focus in her book include family drama, maintaining friendships, professionalism, and depression.

Ginger clearly understands that it will be hard for many who know her from TV to understand that she suffers from depression and has for a long time. She eases you into the idea of it early on, with a few references to it in some of the earliest chapters, but it’s past the middle of the book before she dives deep into how it has affected her life and how she overcame its hold over her. Through her stories, readers suffering from depression may better understand themselves and some ways that they can seek help. For those without depression, it will provide a better understanding of what it’s like to have it.

For those who are interested in learning more about what it takes to be a TV meteorologist, this book is full of Ginger’s fantastic adventures. Ginger examines how she became obsessed with weather as a child and discusses her education. You get to join her on her earliest gigs at small town TV stations and learn why the term “Weather girl” does NOT apply. Follow her on some heroic and heartbreaking storm chasing assignments, and also some inspiring and wonder-filled trips to the farthest corners of the globe.

Natural Disaster by Ginger Zee takes you through the full range of emotions. I laughed, I cried, and I Googled where I can find banana pudding near me. She has arrived at a point in life where she is happy, successful, and grateful. If you see her smiling face every day on GMA, I recommend getting to know her better through her well-written and insightful book.