Champions #16 starts off with a reminder to all readers, “the world still needs heroes.” In this comic, we find the younger more millennial versions of our favorite characters looking to expand the roster of the Champions. The founders of the Champions, Nova, Spider-Man, Cyclops, Ms. Marvel, and Hulk, are all debating and recruiting their own personal interests to join. Patriot and the new Falcon are asked to join, as well as Red Locust, and even Ironheart. 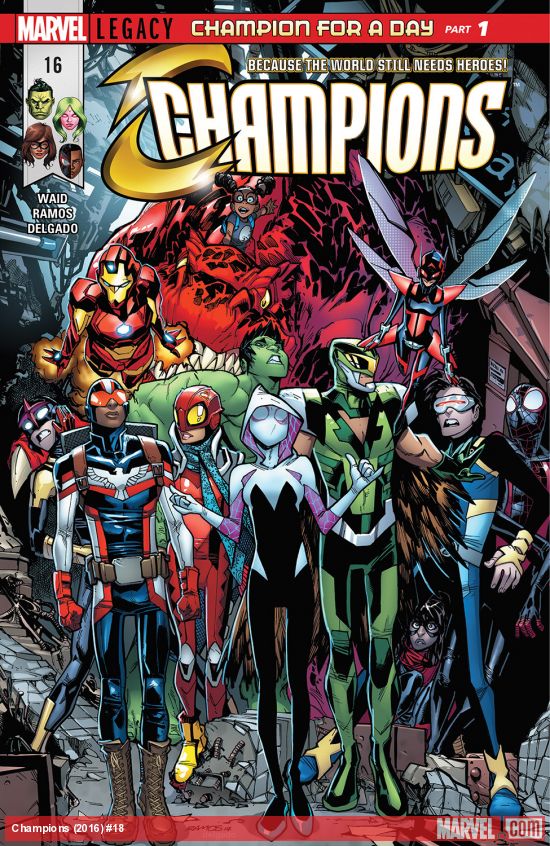 While the Champions are out recruiting one of their members, Viv Vision is enduring heartache as she tries to come to terms with her father, Vision, replacing her.

A quick read of the comic and one might easily miss the point that I think Champions #16 is trying to make. Of course, the world will always need heroes, and the characters that make up the Champions demonstrate their virtue and are even smart enough to try and recruit more people to join. What superhero team has a limit? The more the merrier, and it seems like every member of Champions has sought out someone they like to join the fun and defend the world.

The Champions are founded on the idea that they need to be better than what everyone else was during the second civil war. The Champions would rise above the infighting and mistrust and always be an alternative, dedicated to the protection of Earth. The honor that they show and the nature of their good hearts is evident not only in the dialogue but also the artwork of this comic. Artists Humberto Ramos and Victor Olazaba have done a magnificent job in representing the Champions has heroic, with clean lines that well-define every character no matter the setting. I feel happy when I see the characters and watch them go on their recruitment drive, but I have a completely different feeling when the story focuses on Viv Vision.

Vision thought he lost his daughter, so he built a new one to replace her. Shockingly, Viv Vision didn’t die and returns, and now we have an identity problem in the household. Vision is not a human, but his original daughter has become one. She has been replaced by a daughter more like the father. Viv is now the outsider in her home. How does one come back from the dead and take their place at home, when another version of you is sitting in your spot? Herein lies the great bait and switch of this comic. We think this is a filler comic with superheroes making friends and having fun. It’s not.

I have never been a fan of Champions, and I have not read much in the series because it just doesn’t interest me. I was interested on the first page of this comic, and it took reading through the comic a couple of times to really appreciate the juxtaposition of what writer Mark Waid was doing. In Champions #16 life is great. In fact, life is so good that the members of the supergroup are off recruiting others, thinking they live on a stable foundation. But they don’t.

The dialogue not only changes from that cheery, everything is all right mentality, to a depressed and saddened Viv Vision who is unsure about herself. Artists Humberto Ramos and Victor Olazaba continue this contrast with darker colors for Viv Vision and the whole Vision family. You can see the anguish and hurt on Viv’s face. Her feelings are reflected in the colors that make up her world. While her teammates are oblivious to her pain and having a good time, she is experiencing the worst of life, a loss of identity.

My point is, that Champions #16 is diving deep into identity issues and mental health, and I am truly impressed. I like comics that are action packed but much like Rise of the Black Panther #1, the focus on family and how we interact and live due to our family are issues that I love seeing addressed and explored in the pages of Marvel Comics.