Touring the Heart of San Antonio: The Real Alamo

“Davy Crockett did not die gloriously swinging his rifle at the invading Mexican army.” This was the first thing I overhead as I walked by the Alamo on my first day in San Antonio. The Alamo is one of the biggest tourist attractions in San Antonio, and it commemorates a battlefield that now lays buried beneath the pavement and concrete of a major city. I knew a lot about the site, but since landing at the airport and being welcomed to ‘The Alamo City’ I didn’t know the former mission had become a brand. 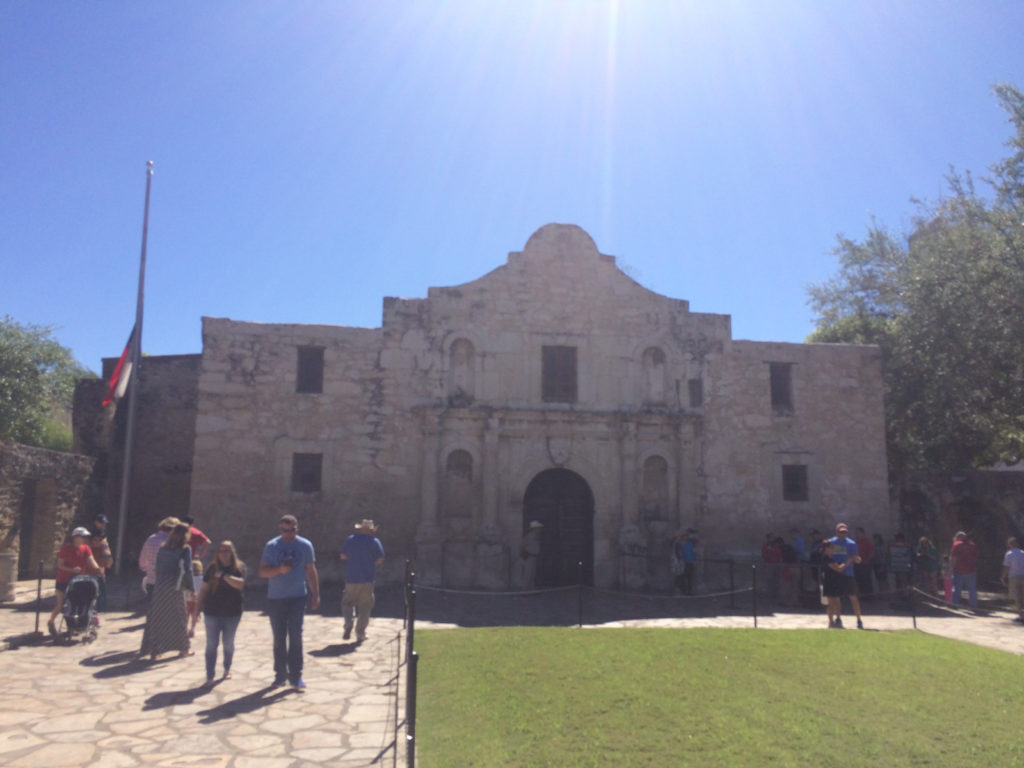 The Alamo of today is encircled by Houston, Alamo, Bonham, and Crockett streets. Century-old walls hold up the frame of the remaining church, but the exterior walls that many may have seen in the 1955 Fess Parker movie do not exist. An open plaza with a cenotaph that stands 60 feet high has taken its place. The white color of the stone brings peace to a site that saw so much slaughter. I took a moment to stand in front of this monument and thought of the hundreds who died in the cause of Texas independence. They have no graves for their lost souls, just this massive memorial.

Today at the Alamo, there are no rifle shots, just selfie sticks. Even though entry to the Alamo is free, and there are five options to enter the Alamo around its courtyard, the only true way to enter, the way I did, was through the church doors. You can choose to navigate the historic site by personal audio guides that you control at your own pace, or you could join a guided tour. These two options come at a price, and for those who just want to look around, you could always wander aimlessly. I opted for the audio tour and an aimless wander. Whichever way you choose to traverse the Alamo, get in line for the church entrance. There might be a queue and you will most likely be asked to stand for a souvenir photo, but this is the proper way to start your tour of the Alamo.

Walking through the massive wooden church door, you are confronted with a centuries-old witness that tells no stories. The inside of the church is quiet, with little description of what happened during the epic battle. Do not touch the walls or take photos, if you do, you will be cautioned by an employee not to do it again. Take a moment to sit and listen. If you concentrate you might hear the faint whisper of the only standing witness to the siege of the Alamo. Remember that this ground you are walking on is sacred ground.

Exiting the church brings you into the enclosed courtyard that allows visitors to set on a variety of paths. In the amphitheater area, sit down and catch some of the lengthy movie about the history of the Alamo, the battle for Texas independence and the people who played a significant role in these events. The theatre is small, find a seat and relax while you get the full story; the reality and not the Hollywood myth. Since it’s a lengthy movie you can easily pick up in parts, depending on how many times you visit the Alamo on your stay in San Antonio. 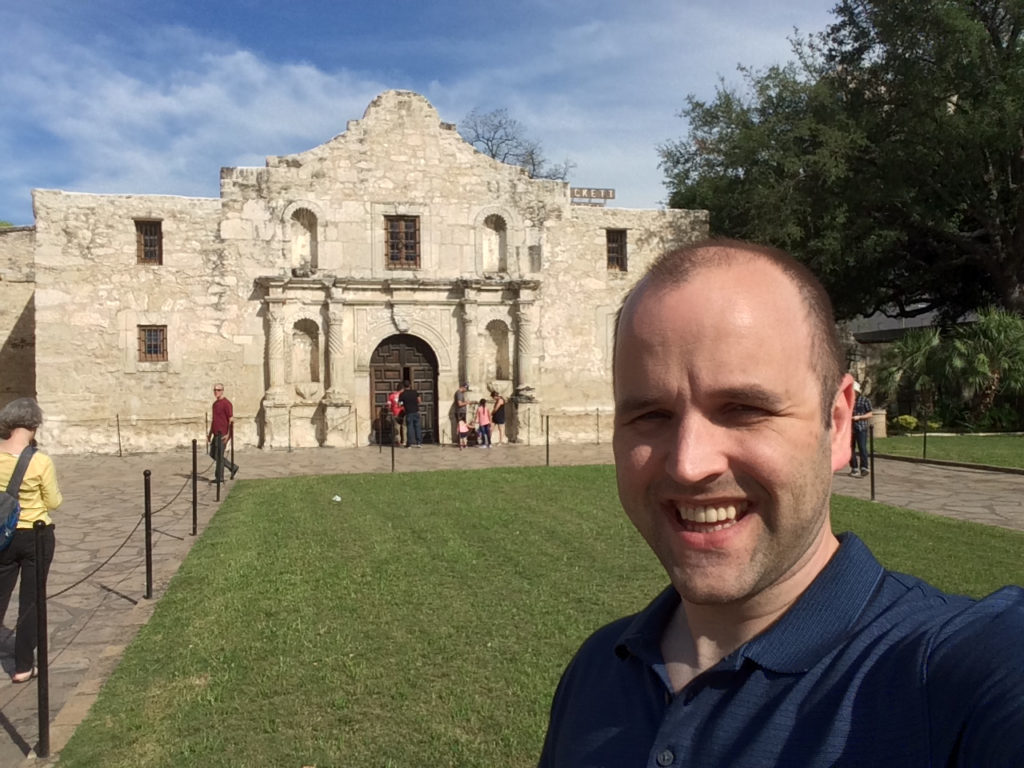 In the back courtyard, I saw interpreters out to show a slice of life from the 1830’s. These activities and costumed employees gear their programming to kids, but as an adult they are fun to watch as they try to bring a snapshot of life from the past into the modern day. Navigating the back courtyard is easy, and doesn’t require a history degree. Sitting in the shade of the historic site, I couldn’t help but marvel at the fact that this battlefield has been converted to a quaint city park that anyone can come and relax in.

I have never had a problem with the concept of exiting through the gift shop, but you can avoid the gift shop at the Alamo if you wish, which I don’t recommend. Located across from the church and almost in the center towards Houston Street, is the Alamo gift shop. Yes, it has lots of items for sale, and many of these items are tacky tourist fare, but some are worthwhile souvenirs that continue the story of the Alamo.

Books about the Alamo, Texas history and even a biography of Fess Parker the famed Davy Crockett actor of the 1950’s Disney movies are all for sale at the Alamo gift shop. Patriotic flare emblazoned with the words ‘Don’t Mess with Texas’ can be purchased here, as well as t-shirts of a variety of kinds. For the souvenir junkie, the Alamo will hook you up for your merchandise fix, it did for me. Why every traveler should see the Alamo gift shop is the scale model of the battle that sits under glass in the center of the building. The model shows how outnumbered the Alamo defenders were. 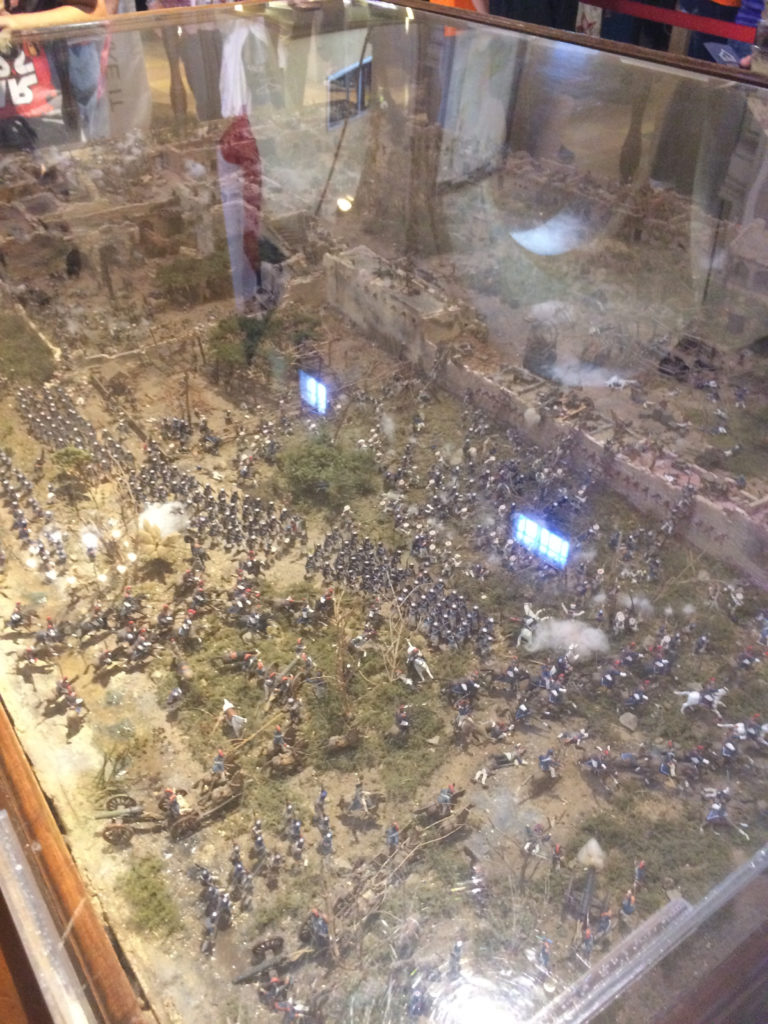 You may enter the church, walk the grounds, and even sit through the whole movie at the back of the courtyard, but this model in the gift shop truly depicts for you the brutality and the sheer scale of troops that were involved in the siege of the Alamo. It’s hard to fathom the thousands of Mexican troops that encircled the few hundred Texas patriots at the Alamo, and this model will help you visualize the history. Walk into the gift shop to see the model. You can choose to ignore the capitalist crush of all things branded with the Alamo, but don’t miss the model.

My tour ended, and I returned my audio wand to head back to my hotel. I didn’t say goodbye to the Alamo, because I came back twice more, simply to walk around without a purpose. I wanted to walk through the church again and sit in the back courtyard. I even came by to stare at the church as it was lit up in the night long after the gates were closed. People came in the day, and they stood in the evening with the church in the background because they want to see the Alamo.

San Antonio is ‘The Alamo City’ and every souvenir store has some form of Alamo kitsch. The airport has Alamo everywhere, and though the site is a brand for the city, don’t let that stop you from seeing this simple spot at the center of San Antonio. If you take a tour of the Alamo, you will learn why this Spanish mission, turned fort for rebels, is the heart of this metropolis.