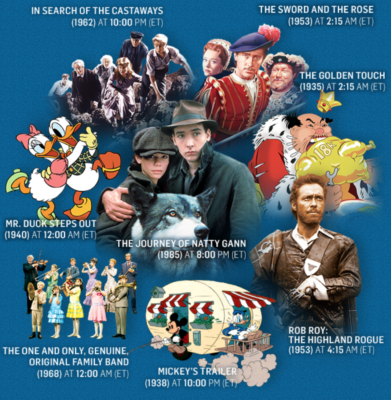 TCM’s Treasures from the Disney Vault returns Thursday, March 29th, for an evening full of some obscure titles in the Disney canon. If there’s a theme that can be gleaned from tonight’s lineup, I would say it’s “Characters on the move.” The only common element is that each film’s character journey requires them to travel, often at great distances, in order to arrive at their signature Disney happy ending. We will see Peter Ellenshaw and Ub Iwerks providing some of their best live action special effects, hear some lesser known songs from the Sherman Brothers, and complete the collection of Disney films produced in England with World War II profits. Tonight we span five decades of Disney entertainment between the years of 1935 and 1985. As always, Leonard Maltin is our host and curator, offering introductions and post-film dialogue. While this preview offers some fun facts about each film, his wealth of knowledge is sure to yield vastly different takes.

Editor’s Note: TCM’s Schedule lists a different order for the night’s lineup than their official Treasures from the Disney Vault website. Since TCM’s Schedule has been wrong before, we have made an assumption that the official website is correct and are presenting the lineup in that order. However, the films could instead be presented as follows: 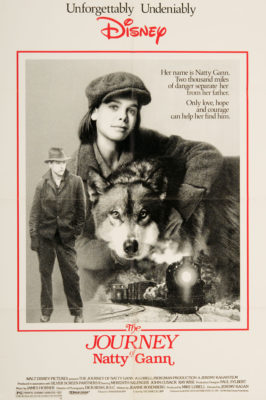 The most recent film of the night, The Journey of Natty Gann, comes from the mid 1980’s when Disney was fighting off a corporate buyout and trying to right a misguided ship. It serves as a great segue between the types of films the studio was used to making and the “Disney Decade” style that would be a hallmark of the Eisner era in the 1990’s. If nothing else, it can be viewed as connecting tissue between The Incredible Journey (1963) and its remake, Homeward Bound: The Incredible Journey (1993), both different takes on the same story. Although slow paced, Natty Gann is not without its charms.

Set in 1935, Natty’s single father finds himself out of a job and must travel to Washington for a lumber contract, leaving his daughter behind with a neighbor. But when things turn sour for the adolescent girl, she runs away and attempts to make it to Washington on her own. Along the way, she befriends a dog fighting wolf, who becomes her protector, and makes friends with a drifter a few years older than her (John Cusack).

The Journey of Natty Gann features a lot of elements that you would never see in a modern Disney film, including kids smoking cigarettes and a scene where Natty is being sexually harassed. But if it’s any consolation, you’ll also see about three seconds of a black and white Mickey Mouse short (Two Gun Mickey) when Natty tries to sneak into a movie theater. The best thing about the film is the score by James Horner, but it also features some solid acting performances by its young leads and animal co-star (three cheers for JED as “Wolf,” who also starred in Disney’s White Fang).

Recommendation: If you enjoy films like ‘Wild Hearts Can’t Be Broken’ and ‘Iron Will,’ this should be right up your alley. 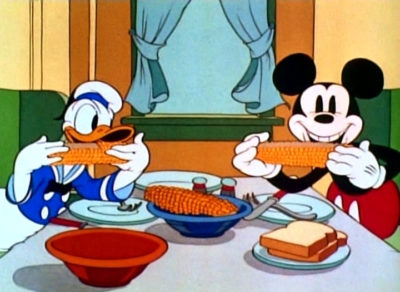 In one of their most memorable collaborations, Mickey, Donald, and Goofy go on a trip that gets away from them in Mickey’s Trailer. The gang wakes up in what looks like a home in the picturesque countryside. They then pack everything up, including the backdrop, to reveal the dump they parked in for the night before setting off on a drive that includes grabbing lunch out of their window and a rollercoaster ride down steep cliffs.

Mickey’s Trailer features many iconic gags, including Mickey and Donald eating corn on the cob like a typewriter. There’s an innovative moment where Mickey leans out the window as corn stalks pass by in rotation, an effect that surely came from the mind of Ub Iwerks. The entire short is classic Mickey Mouse fun.

Recommendation: This is the best animated moment of the night, don’t miss it! 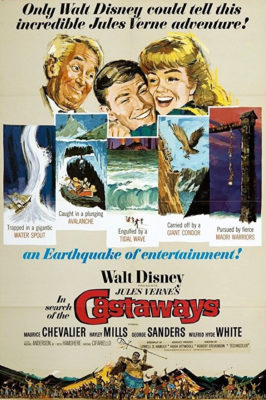 Hayley Mills, hot off the success of The Parent Trap, headlines Disney’s second take at the works of Jules Verne with In Search of the Castaways. It has a mostly British cast (plus Maurice Chevalier) and was even filmed in England, making it one of Hayley’s few Disney roles where her British accent makes sense. While the film is from the same storyteller that brought us 20,000 Leagues Under the Sea, the similarities stop there.

When Mary and her brother Robert receive a message in a bottle from their missing father, they stow away on a ship that will hopefully bring them closer to him. Enlisting the help of the captain, his son, and a Frenchman named Jacques (Maurice Chevalier), they find themselves on a wild adventure that includes earthquakes, giant people eating condors, volcanos, and a makeshift sleigh ride through underground ice caverns. It’s the type of adventure film that could only have happened at Disney.

The visual effects are laughable by today’s standards, but would have been groundbreaking in 1962. The sheer quantity of matte paintings, models, and sodium vapor screen usage rivals even Mary Poppins. Speaking of which, the film features a few songs by the Sherman Brothers, most notably the Mills/Chevalier duet “Enjoy It” and the ballad, “Castaway.”

Recommendation: At least watch the first half to catch some zany effects, including a giant condor picking up a young human boy. But don’t expect to fall in love with the film itself. Overall, it leaves a lot to be desired. 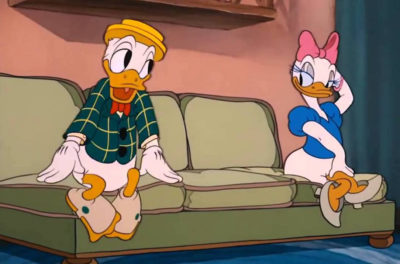 Donald Duck turns on the charm for his main squeeze Daisy in this cute short. Huey, Dewey, and Louie dress up to help woo her, but once she’s softened on Donald, he sends them out for ice cream while the two ducks cut a rug. The gags pile up as their dancing turns to laughable mishaps.

While Donald had female duck love interests prior to Mr. Duck Steps Out, this is billed as Daisy’s first short in both appearance and name. Despite her modern popularity, she only appeared in fourteen of the original Disney shorts. Perhaps most jarring for audiences who haven’t seen this short before, she is voiced by Clarance Nash, the voice of Donald, who makes no attempt to make Daisy sound feminine.

Recommendation: Daisy Duck’s debut is a must-see for all Disney fans. 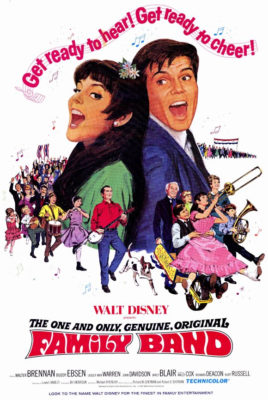 What do you get when you combine Oscar winner Walter Brennan (Those Calloways), Buddy Ebsen (Davy Crockett), Kurt Russell (Follow Me, Boys), and reunite Leslie Ann Warren and John Davidson (The Happiest Millionaire)? The answer is one of the oddest Disney musicals ever made. Strap in for two-hours of mediocre plot, too many characters, and political undertones that prove that history does, indeed, repeat itself.

The Bowers are a musical family and democrats through and through, with plans to perform at the DNC for the 1888 election. But when the eldest daughter Mary (Warren) is courted by Joe Carder (Davidson), a republican journalist, the entire family decides to move to Dakota, where they become a voice against splitting the state in half in order to send more republicans to congress. It’s a lot of politics and a lackluster romance with music by the Sherman Brothers!

The One and Only, Genuine, Original Family Band held the record for the longest title of any Disney film until the release of Alexander and the Terrible, Horrible, No Good, Very Bad Day. A few of the Sherman Brothers songs are quite memorable, most notably “Ten Feet Off the Ground,” “‘Bout Time,” and “Dakota.” The songs almost make the plot bearable, while Leslie Ann Warren’s late 1960’s bangs in this period piece serve as a real curiosity.

Recommendation: I don’t recommend this film, but if you’re a Sherman Brothers fan, set your DVR so you can fast forward to all of the songs. Also, yes, that girl dancing at the end is Goldie Hawn.

The night is still young! Proceed to the next page to finish the lineup.