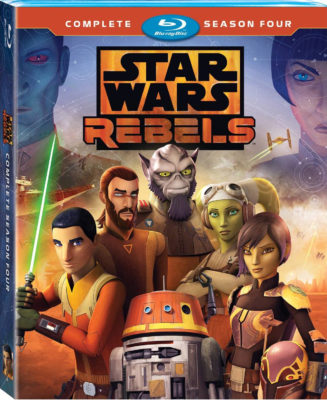 Star Wars Rebels may have ended, but now you can own every episode with the final season on Blu-Ray. Star Wars Rebels Season Four contains all sixteen episodes of the show in high definition, along with hours of bonus features. Go behind the series and the end of the season with the creative team and cast as the Ghost Crew reaches the end of their journey.

Ezra, Kanan, Sabine, Hera, Zeb, and Chopper have come along way since the start of the series. With Thrawn and the Empire gaining power, the road ahead is rougher and more dangerous than ever before. And with the Empire trying to break into a Jedi temple that contains powerful knowledge of the force, they must do whatever it takes to stop them.

This season was guaranteed to be emotional by nature of it being the final season. But fans were likely shocked by the final outcome for the Ghost Crew. And their paths cross with other well known characters this season, including the Emperor himself.

It’s sad to see Star Wars Rebels end, but comforting to know that a new series will allow us to continue expanding the universe. With Clone Wars confirmed to resume and a new series in development, one thing that’s for sure is that this isn’t the end for all of these characters.

With this release, fans can collect the entire Star Wars Rebels series in stunning high definition. With exclusive bonus features that go behind the series, fans will gain insight into the production process and get some hints about the future of Star Wars animation.

The fourth season of Star Wars Rebels arrives on Blu-Ray in a standard-sized case. Both discs have disc art and are housed on either side of the interior. The only insert is a code for points through Disney Movie Rewards. The initial release includes an embossed slipcover that matches the previous three seasons. There aren’t any ads on either disc and both menus feature clips from the show set to music.

Star Wars Rebels Season Four can now be yours to enjoy forever with this Blu-Ray complete season release. The bonus features help remind you how great this series was, connecting episodes that may not be fresh in your mind with ones from this season and also putting it all in the context of the greater Star Wars universe. It’s a perfect way to celebrate this great series.