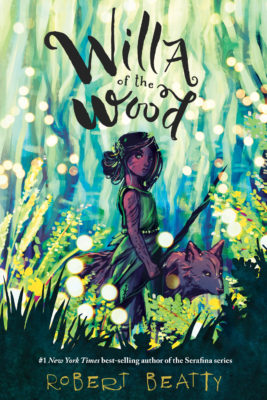 Children often spend their time with one foot in a fantasy realm and the other in reality. The rose colored glasses of childhood allows us to blend the two at will and live in a magical world where imagination is the only limitation. That is what Robert Beatty has done with Willa of the Wood, blending reality with fantasy and spinning a traditional fairy tale woven with Native American Folklore and non stop action.

When we first meet Willa of the Wood, she’s a young thief for her clan of woodland nymphs called the Faeran. She’s operating alone and breaking many of the guidelines the clan has in place to protect themselves but Willa’s ambition to be the best thief leads her into the home of a human to find possessions the leader of the clan is sure to prize more than anything. From this first encounter the action never ceases from her near fatal escape, to her run-ins with her jealous peers, encountering wolves, bears and the gods of the wood, to uncovering the dark secrets of her clan. Willa eventually finds herself as an outcast and on the run from her own tribe and has to use the skills her grandmother passed on to survive.

The wild ride makes for a thrilling page turner that may have been better suited for two books than one. There’s a clear split in the first half of the book and the second half that would have made for a perfect cliff hanger and a break from the constant action that doesn’t let up until a third of the way into the second half. This is where a great deal of excellent character building and emotional attachment comes into play that the first half sorely misses. While the action in the first half is intense and exhilarating, you never get a chance for anything to sink in or to really care for anyone who’s introduced. Once you do get that chance, the world that Robert Beatty has established really comes to life.

The journey of being split between two worlds and feeling alone is one that I think many children experience but don’t necessarily get the chance to open up about and Willa is a wonderful character to project those feelings through. Willa is a strong willed, compassionate and resourceful character that I believe can instill a sense of adventure and conservatorship into kids who’s worlds are rarely expanded past the hashtags and rapid trends on their phones. Theres many themes at play and all of them have their rightful place in the story, but the main themes of family and belief in oneself are present from beginning to end.

While the length of the book may be daunting to less experienced readers, the short chapters and easy to read narrative is likely to be engaging for kids ages 11 to 14. I found the changes in the chapter heading to be interesting and a neat indicator of what Willa is feeling in each chapter (Blacked out silhouettes for the introspective and sad chapters, outlined silhouettes for the more optimistic chapters). I really would have loved to see more of the connection between Willa and the wolf Luthien as well as the Native American Folklore and I hope future installments brings more of those elements into play. There are some parts of the book that may be graphic for younger readers, not just in graphic violence but graphic deforestation that gives life to the plants and animals affected. Even still, Willa of the Wood is great introduction to high fantasy for a young crowd. I could see this being the stepping stone for kids that leads to reading books like The Hobbit and Lord of the Rings.