Book Review – “The Isle of the Lost: The Graphic Novel” (Disney Descendants) 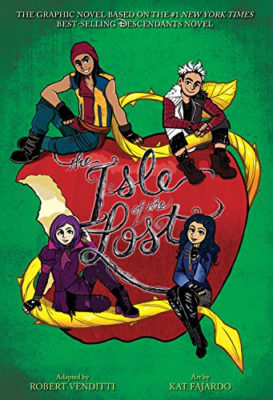 Disney Channel’s Descendants sort of took 2018 off, with the exception of a live action short that debuts September 28th. But don’t worry, Disney Hyperion is committed to finding ways to satisfy your wicked heart. Melissa De La Cruz’s best selling prequel novel, The Isle of the Lost, has now been adapted as an illustrated comic in The Isle of the Lost: The Graphic Novel.

While i have seen both Descendants films, I never read any of the Isle of the Lost books. The graphic novel was a quick way to absorb the story, allowing artist Kat Fajardo to visually tell me everything about the locations and characters, letting speech bubbles be the only written narrative. It’s a great way for fans of the films to reconnect with their favorite Villain Kids in a story they haven’t seen in a visual medium yet.

Life’s tough on the Isle of the Lost, an island made of trash off the shores of Auradon where the baddest villains have been banished under a dome that prohibits their magic. Their own turf wars have affected their children even from a young age, with rivalries and feuds keeping would-be friends apart. In an effort to please their tough parents, Mal, Jay, Carlos, and Evie band together on a mission that forms unexpected friendships.

There’s no magic under the dome, but when Carlos creates a device that temporarily cracks it, Maleficent’s lost scepter begins calling to her. She demands that Mal retrieve it for her and she employs the skills of Jay, Carlos, and Evie in order to help her find Maleficent’s old fortress and get past the enchantments that guard her old throne room.

One of the surprises of the story are the Disney characters present here who aren’t in the DCOMs that inspired this tale. This includes Genie, Grumpy, Flounder, Pongo, Mother Gothel, Dr. Facilier, and Yensid. In these pages, they look very similar to their animated counterparts, whereas characters from the film (Maleficent, Evil Queen, Jafar, Cruella) all look like their DCOM counterparts. With casting for the third film already confirming screen time for Dr. Facilier, it will surely outdate itself if the character design doesn’t stick close to his animated predecessor.

The original novel of The Isle of the Lost was published before the first film aired, giving fans a tease at what was to come. Reading it now in graphic novel form is a fun way to see how these characters became friends in the first place, but it’s far from essential reading. I am, however, excited by the prospects of having the sequel novels adapted (Return to the Isle of the Lost and Rise of the Isle of the Lost), which provide connecting tissue between the first and second film.

The Isle of the Lost: The Graphic Novel is now available, as is the original novel and its sequel. Fans of Descendants should stay tuned to Disney Channel on September 28th to catch the new live action short film, “Under the Sea,” which airs at 7:50 pm.