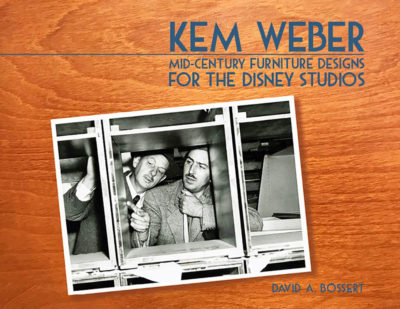 Walt Disney’s studio lot in Burbank was an animator’s utopia, thanks in large part to the designs of Kem Weber. His influence could be felt from the architecture of the buildings to the custom furniture created for the various animation disciplines. Disney fans have no doubt seen it before through behind-the-scenes photos or Disney Archives exhibits, but few have touched it or sat in it. But you’ll feel like you have when you read Dave Bossert’s newest book, a dream project called Kem Weber: Mid-Century Designs for the Disney Studios.

Bossert invites readers back in time to when he first felt the lore of the Kem Weber furniture that he and the next generation of Disney artists began to inherit as the Nine Old Men retired. The magical qualities each piece seemed to posses, the rivalries to work at a desk that previously belonged to an animation giant, and the way the heavy furniture moved with them as they were booted out of the Animation Building, for which these pieces were custom designed to begin with.

If you’re reading this review, you’re probably a big Disney fan. But odds are that you haven’t extensively studied architecture or mid-century designs. Dave Bossert has you covered with a chapter that recaps the trends of the era, Weber’s design influences, hallmarks, and how a man like Walt Disney sought him out by name to design his new creative campus, an initiative copied today by tech giants like Google.

If there’s one piece of Kem Weber furniture you could name in a round of trivia, it’s likely the Air Line Chair that can be found in design museums all over the world. Bossert expands your Weber design vocabulary with pieces like Director’s Desk, Story Desk, Layout Desk, Versatile Animation Desk, Assistant’s Desk, In-Betweener’s Desk, Background Desk, Color Keying Desk, and Paint Table. All of these pieces were custom built for Walt Disney’s dream factory, and that short list (with a chapter devoted to each) doesn’t even cover the additional accouterments including closets, clocks, and chairs in varying sizes. It also covers the furniture custom designed and built for Walt’s offices, including the legendary piano that the Sherman Brothers would play “Feed the Birds” on every Friday.

The collectability and historical significance of the pieces is covered, including how Disney at one time devalued them enough to move pieces off the lot at low cost auctions until they began to sell for tens of thousands. The original Kem Weber furniture still in the company’s possession is now a prestige piece in the offices of executives, making them a status symbol at the studio to this very day. There is even a department that checks in on the pieces from time to time to make sure they haven’t been removed from the lot without their authorization.

Through the story of Kem Weber’s furniture designed for the Walt Disney Studios, readers will also get a glimpse at the culture inside the hallowed linoleum halls of the old Animation Building. From metal protectors on the edge of desks to prevent cigarettes from burning the wood to cabinets that are the perfect size for personal bottles of liquor, you’ll feel like you’ve touched and smelled each piece of furniture through Bossert’s detailed descriptions. In many of the modern photos of the pieces, you can see the history in them from scratches and stains to add-ons that each user has contributed over the decades of hand-drawn animation that range from Pinocchio through the decline of the medium.

Most Disney fans will never have the chance to sit in a Kem Weber Air Line Chair designed for the Disney Studio, or touch an Animation Desk. However, Bossert offers so many photos, including new illustrations of the pieces and their dimensions, that handy fans are given enough details to create their own as a DIY project. The details include the type of wood they were constructed from, the materials used to connect them, the handle style (likely the most difficult part to replicate), and the type of linoleum used on the base.

“Believe it or not, there are still plenty of Disney related topics to write about that have not been covered in any depth already,” Bossert explains in his Introduction. “I know that may sound hard to believe with the hundreds of books on Disney that have been published over the years, but there still are plenty of stories to tell. These are the stories behind the stories, which sometimes are the most interesting and fascinating.” Disney fans can learn the untold story behind the custom designed Disney animation furniture in Kem Weber: Mid-Century Furniture Designs for the Walt Disney Studios, available November 13th.