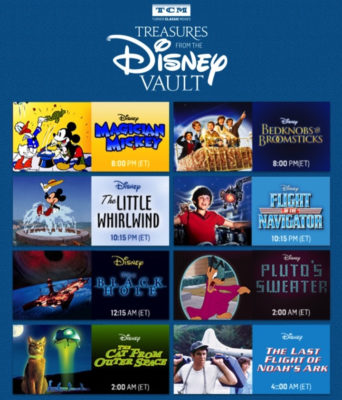 Welcome to the 16th installment of TCM’s Treasures from the Disney Vault, hosted by Leonard Maltin. Tonight. Mr. Maltin has curated a programming lineup that showcases Disney’s special effects advancements in a post-Walt world. With the exception of three animated shorts scattered throughout the night, every feature film was made without his direct supervision, although his influence can certainly be felt in most of these features. Tonight’s feature presentations span from 1971 to 1986, so gather around your television set with a box of Ding Dongs and a can of Tab, because the 70’s and 80’s are back tonight!

Mickey Mouse’s 90th birthday is just around the corner and TCM kicks off the night with one of his classic shorts. In this 1937 Technicolor film, Mickey plays a magician to a packed vaudeville house. Goofy plays his clumsy stage hand and Donald, an audience member bent on heckling and spoiling Mickey’s tricks.

Magician Mickey has a simple premise, but gets by on an endless series of gags. It’s a true sign of the times in which it was made, with Mickey playing to a vaudeville style theater. He also does things you wouldn’t see today, including shrinking Donald to the size of a bullet and firing him out of a gun. This is Mickey just nine years after his creation, more toned down than his black and white days, but still a little mischievous.

Recommendation: You can’t miss the animated portions of the evening and “Magician Mickey” is a fun way to start off this magical night. 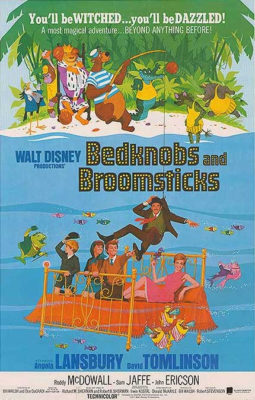 Angela Lansbury and David Tomlinson star in this splashy Sherman Brothers musical film. When an apprentice witch becomes ward to three displaced children during World War II, the kids learn that Eglantine Price intends to use magic to stop the war. But when the last spell is missing from her book, she enchants a bed knob to take them on a quest to find her professor and the missing spell that she desperately needs.

Released six years after Mary Poppins, Bedknobs and Broomsticks was originally a backup plan when it appeared that P.L. Travers wouldn’t allow Walt Disney to adapt the Poppins books into a film. The Sherman Brothers first worked with Don DaGradi on the songs and story while on a break from Poppins and when the studio resurrected the project post-Walt, they sought Julie Andrews for the lead part and ended up casting one of the original actresses considered for the role of Mary, Angela Lansbury.

The film uses many of the same special effects tricks employed in Mary Poppins. This includes sodium vapor screens that allow the cast to spend time in an animated world. By comparison, Angela Lansbury’s broom flying offers some more impressive wire work than Julie Andrew’s travels by umbrella. The visual effects in the film were celebrated with an Academy Award win.

Bedknobs and Broomsticks is often slow paced and for the most part, unexciting. However, a few of the songs are standouts, including “The Age of Not Believing” and “Beautiful Briny Sea,” a song originally written for Mary Poppins (the original concept appears to be used in the upcoming sequel, Mary Poppins Returns). The animated sequences are delightful, directed by Disney Legend Ward Kimball. 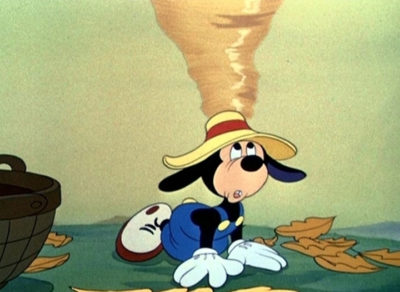 Minnie Mouse is busy baking and Mickey wants a piece of her cake. He agrees to do yard work in exchange, but a tiny tornado wreaks havoc on the pile of leaves Mickey scooped. When the daddy tornado shows up, Mickey is in for some real trouble. Effects animators would have been responsible for the leaves, but possibly the tornados as well, which act more like characters in this short.

Pay close attention to Mickey’s ears, which behave differently in this short. They bend around his hat rather than poking through and appear to stay fixed to his sides in opposition to their previous proclivity for always facing the camera. They even have a purple tinted interior. This short was released just one year after Fantasia, but Mickey looks quite different again. 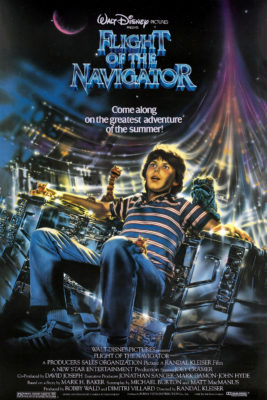 The only Eisner era film of the night, Flight of the Navigator is actually an independent film that Disney helped finance and distributed. It represents a shift away from the predictable fare of the Ron Miller era and the influence of Steven Spielberg can be felt all over the place. Set in Florida, viewers should keep their eyes peeled for an extra wearing an EPCOT Center t-shirt.

While walking in the woods at night, young David Freeman is knocked unconscious. When he wakes up, he discovers that eight years have gone by while he hasn’t aged and has no memory of what happened. He is investigated by NASA, who discovers that his brain waves contain complex star charts from other galaxies. Upon finding a UFO, David is able to climb aboard and meets Max, the onboard computer responsible for David’s peculiar brain waves. With the onboard navigation system malfunctioning, Max needs David’s star charts in order to complete his mission and return home, making David the ship’s navigator.

This film is credited with a breakthrough in computer-generated imagery, using reflection mapping on the ship as it flies over clouds and through the Florida Everglades. A cast of puppets fills the ship, including the mechanical puppet rig for Max. In the HD restoration, strings are very apparent on the adorable Pukmaren.

Flight of the Navigator is a weird, yet intriguing film that offers the type of sentiment that you’d expect in a post-E.T. world. Max is voiced by Paul Reubens, who also voiced Rex, the robot pilot of the original iteration of Star Tours. One of the ships was featured for years in the boneyard of the Backlot Tour at Disney’s Hollywood Studios. Another one has been retrofitted into a red spaceship on top of “Cool Ship,” a Coca-Cola sponsored drink stand in Tomorrowland at Magic Kingdom park.

Recommendation: “Flight of the Navigator” has been considered for a possible remake several times over the past decade and all Disney fans should see it.

The night is still young. Click on page 2 to see the rest of the lineup.