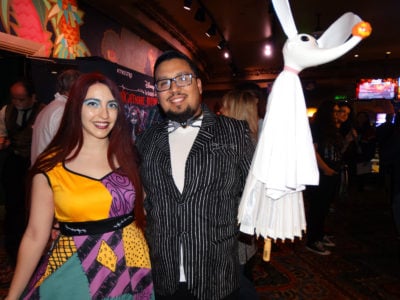 Boys and girls of every age, wouldn’t you like to see something strange? Well, not strange so much as spooktacular! Tim Burton’s The Nightmare Before Christmas is back at Hollywood’s El Capitan Theatre in celebration of the cult classic Disney stop-motion feature’s 25th Anniversary. And along with the fan-favorite animated movie come some very cool added bonus attractions.

The Nightmare Before Christmas is presented in 4D at El Capitan, meaning the audience is “surrounded by sensory effects timed to the movie; lights, fog and scents PLUS “more wind & snow than ever before!” And as always, the theater’s lower level plays home to a wondrous gallery of props and costumes from both Nightmare and Disney’s other 1993 Halloween film: Hocus Pocus.

In the video below, see El Capitan Theatre’s auditorium decor and lower-level display for The Nightmare Before Christmas and Hocus Pocus:

I was fortunate enough to attend El Capitan’s opening night of The Nightmare Before Christmas Monday evening, which featured even more haunted happenings at Disney’s home in Hollywood. First up, the world-famous Dapper Dans barbershop quartet stepped away from Disneyland’s Main Street, USA to become the El Capitan Singers and perform several iconic songs from The Haunted Mansion and of course Nightmare itself.

Finally (after a fantastic fan costume contest and a rousing performance by the theater’s resident organist), El Capitan presented a panel discussion between several filmmakers involved with the production of The Nightmare Before Christmas, including director Henry Selick, animator Mike Belzer, and producer Don Hahn, who helped assemble the movie’s 3D rerelease back in 2006.

Tim Burton’s The Nightmare Before Christmas plays from now through Halloween at El Capitan Theatre on Hollywood Boulevard in Los Angeles, California. For more information and advance ticket sales, be sure to visit the theater’s official website, and for more photo’s from yesterday’s opening night event, check out the image gallery below: