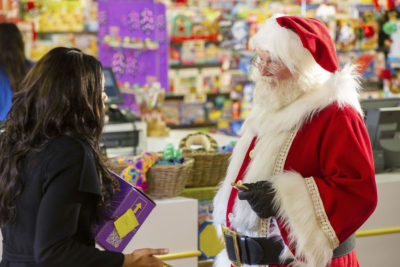 Freeform’s 25 Days of Christmas programming lineup may not officially start until December 1st, but their “Kickoff to Christmas” event started a full month earlier on November 1st. The first of three new original holiday films this year debuts as part of this kickoff lineup on November 25th. The truth about The Truth About Christmas is that it feels familiar and comfortable, just like the holidays themselves. Maybe so familiar that it’s plagiarizing the work of others?

Jillian (Kali Hawk) found love as a political consultant to George (Damon Dayoub), a prospective New York City Mayor. She’s going home with him for the holidays, but when she lies to a child to get a hard-to-find toy for George’s niece, Santa Claus shows up and puts a stop to her web of lies. Now she’s meeting George’s family for the first time and is painfully honest, unable to tell even the smallest white lie. 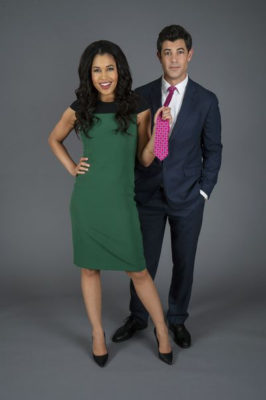 You’ve already seen The Truth About Christmas, albeit in small part of other films. It heavily borrows from Jim Carrey’s Liar Liar, a film about a lawyer who can’t lie and gets into tricky situations. And if you’re a holiday movie junkie, you’ll notice parallels to Touchstone’s While You Were Sleeping as well as Fox’s The Family Stone in relation to the dynamic between Jillian and George’s family. Its biggest challenge in drawing comparisons to such great films is that it can’t hold a candle to any of them and feels like a cheap copy.

The acting in The Truth About Christmas is really bad. A film like this isn’t trying for Emmy’s anyway, but if the Razzies covered television, this would be an easy contender. All of the blame can’t be placed on the cast, as the dialogue is terrible to start with. The characters are also written in one dimension with virtually no depth. In other words, there’s nothing for the actors to breath life into. Time of death, November 25th at 9:00 pm.

The set design is also terrible, looking more like a short film on YouTube than a major network production. There’s dialogue about George’s bland taste in decor, but his parent’s house is an equally boring locale for a majority of the film. The few outdoor snowy sequences are also laughable, with characters in thin long sleeve shirts almost breaking a sweat from the mid-summer heat during filming. There’s no attempt by the makeup team to make cheeks look rosy and certainly no vapor to be witnessed on anyone’s breath. With so many participants not trying to convince the audience that this isn’t just plywood sets and crushed corn chips, you begin to laugh at the unintentionally funny moments while every intended joke needs a rimshot to make viewers aware that one was just attempted.

If you love the holidays and Christmas movies, do yourself a favor and steer clear of The Truth About Christmas. In a film about honesty, there’s nothing but disingenuous tropes. Maybe it will fool younger viewers who haven’t seen the great films it rips off, but I have a feeling that even fresh eyes won’t find this enjoyable.

I give The Truth About Christmas 1 out of 5 ugly owl paintings.