Just in time for Super Bowl LIII, this past week, ESPN debuted its latest 30 for 30 documentary film, Deion’s Double Play. Of course, the timing would have been just as appropriate if the World Series had been this week as well. If you’re too young to recall or aren’t picking up on my hints, Deion’s Double Play features Deion Sanders, who not only played professional football and baseball at the same time but also did so in the same week and — depending on your definition of “played” — in the same day.

Before getting into the hectic October 1992 week in question, the film introduces us to Sanders himself, who explains the difference between Deion the baseball player and his alter ego Prime Time who played football. With that backstory and a brief look at his two-sport career up until 1992, we move ahead to a fateful week that saw Sanders play ball for the Atlanta Braves and hit the gridiron with the Atlanta Falcons, budgeting his time between both teams. This impressive — if not arguably misguided — feat came to head one Sunday as Sanders would suit up for both Falcons and Braves games on the same day. Oh, and while both teams may have been based in Atlanta, neither of the games were in the city, with the Braves facing the Pirates in Pittsburgh and the Falcons taking on the Dolphins in Miami.

Narrated by Chris “Ludacris” Bridges, Deion’s Double Play is dripping with as much style and swagger as Prime Time himself. From the inspired interview setting that finds Sanders in an airplane hanger next to a limo to the energy of the editing, the film is well-crafted and flies by. To be fair, part of that latter point is due to the doc’s one-hour runtime — something that Ludacris actually mentions in his narration, only heightening the time-crunch element that fits the film’s themes perfectly.

Now, when most people think of pros who played baseball and football, the first name to come to mind is often Bo Jackson. That’s why I wasn’t surprised to find this fact addressed fairly early into the film’s runtime when it was also explained how Sanders’ and Jackson’s schedules between the two sports were actually opposite each other. However, I was surprised to then cut to an interview with Jackson, who shared a story about playing against Sanders in a 1991 baseball game. As for interviews, the film didn’t get, I thought the filmmakers were very fair in acknowledging that there was another side to the story, but those who were part of the Braves organization at the time weren’t willing to tell it — at least not for this particular project. 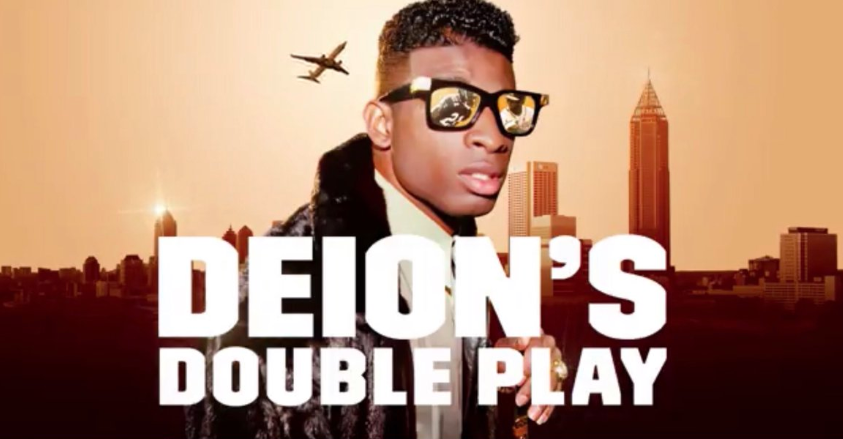 Deion’s Double Play is exactly the type of 30 for 30 I love. While there have certainly been fantastic entries that document full careers, when directors — in this case, Ken Rodgers and Erik Powers — focus in on one particular episode or short period of time, the results rarely lack fascination. Those who missed the events of Deion’s Double Play in real life will certainly be slackjawed to learn that a stunt such as the one Sanders pulled off was ever attempted. Similarly, I can’t imagine a more definitive documentary on this era ever being produced. In short, Deion’s Double Play is both a touchdown and a home run.

Enjoy Deion’s Double Play and other great titles in the 30 for 30 Documentary library with a subscription to ESPN+.