Hasbro recently sent us a giant box of Captain Marvel goodies, preceded by a cardboard pager with the mysterious hashtag “#PagingCaptainMarvel.” It was thrilling to find out what was inside and as you can see from our unboxing video, they sent us a ton of stuff! About half of the items were geared towards kids, with three dolls and a power glove. For the adult collector, we were sent four of the seven Marvel Legends figures from the Captain Marvel collection.

The Captain Marvel Marvel Legends collection consists of seven figures, six of which come with a piece of a Build-A-Figure, which creates a Kree Sentry from the comics. We received Captain Marvel, Nick Fury, Yon-Rogg, and Talos. 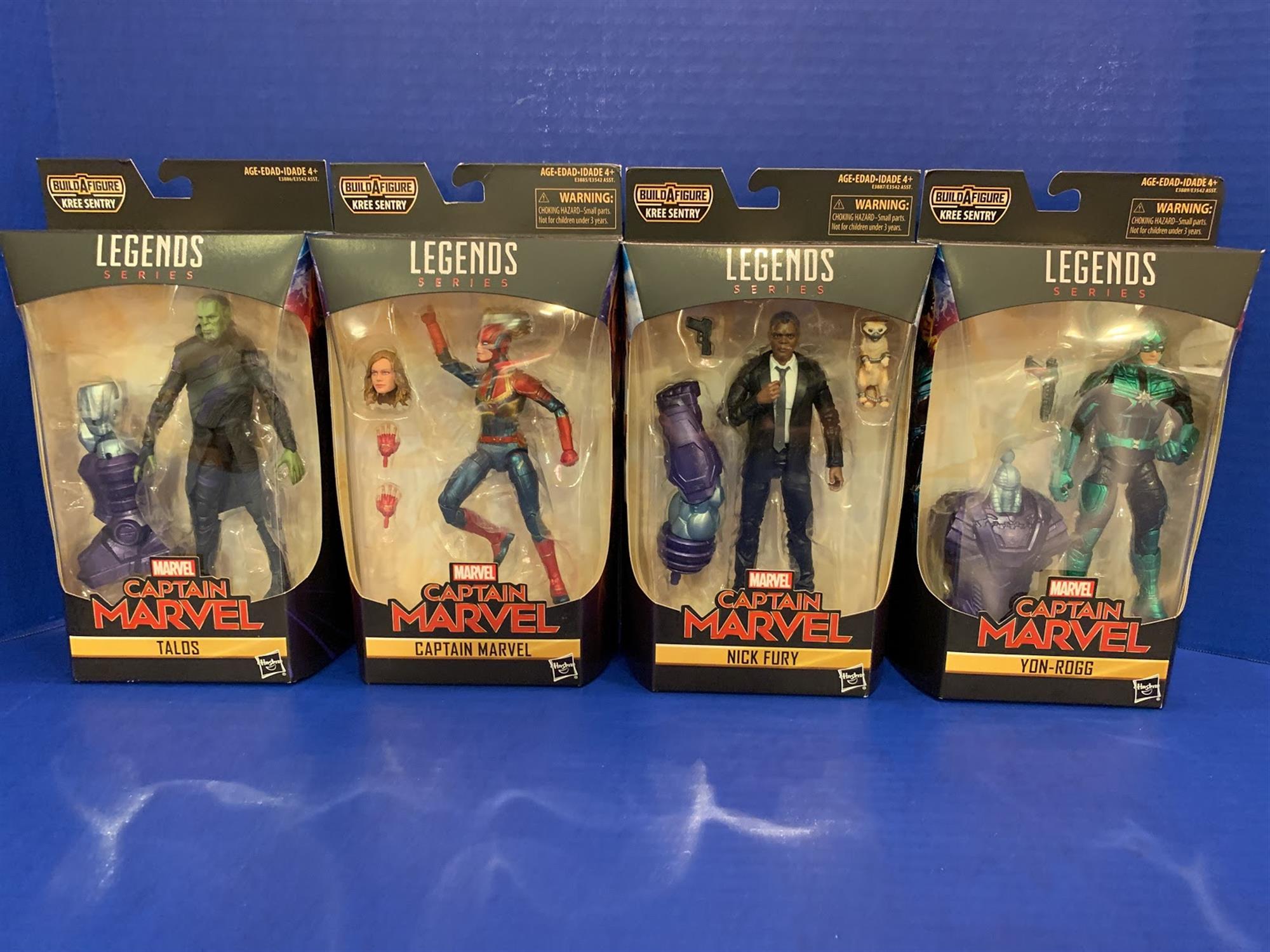 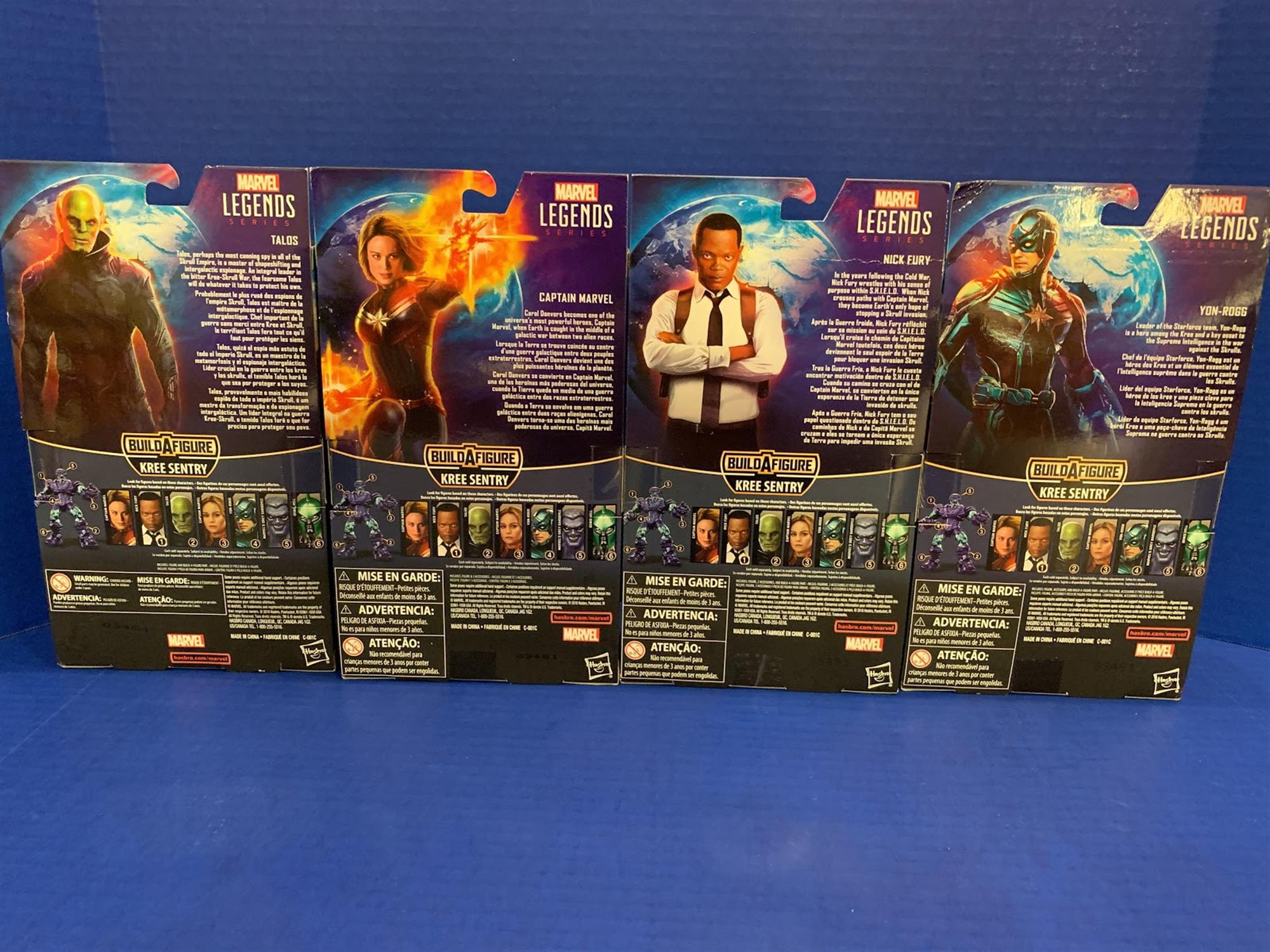 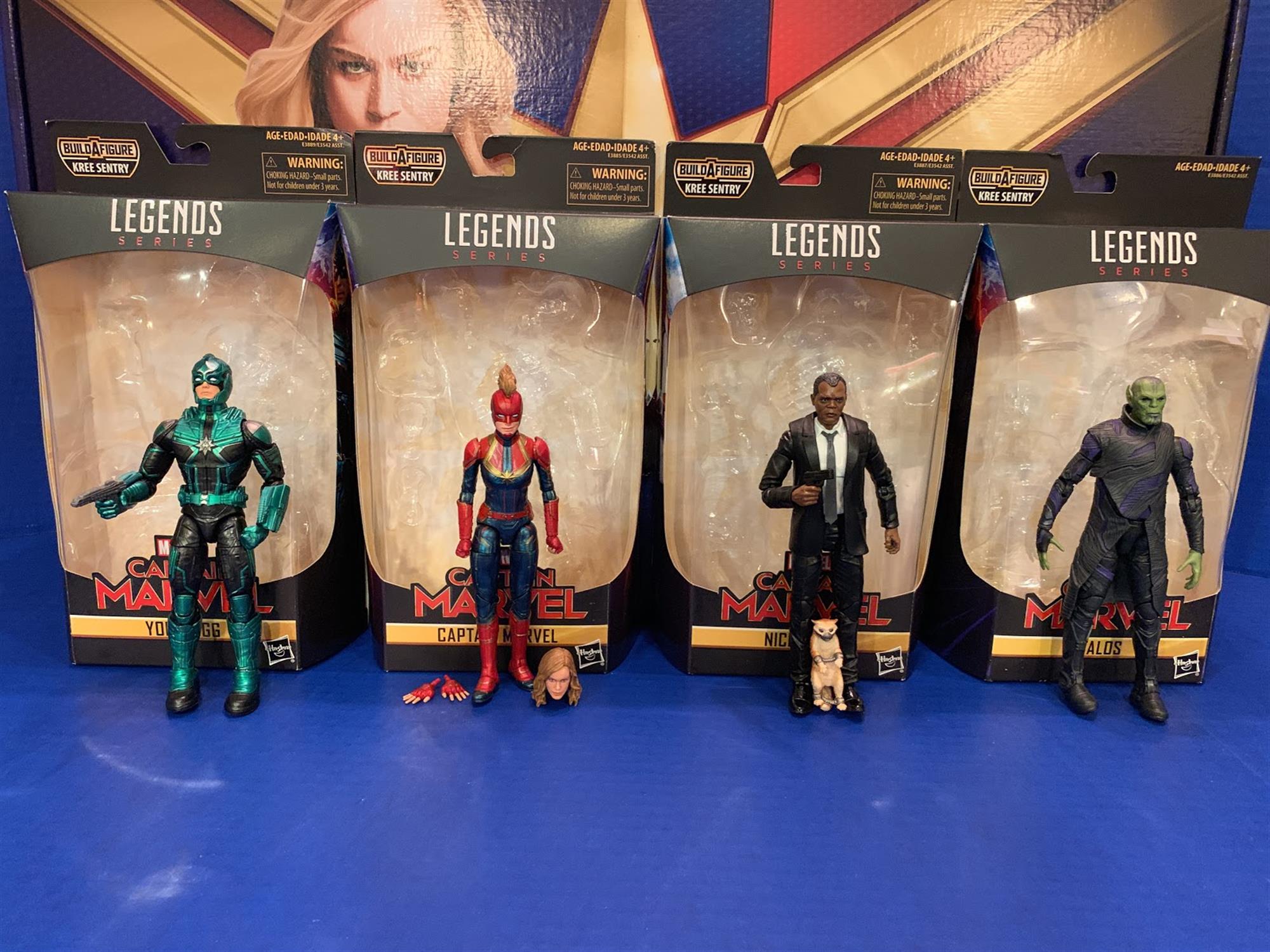 The most exciting figure for me is Nick Fury, who looks exactly like 90’s era Samuel L. Jackson. He looks sharp in his S.H.I.E.L.D. suit and comes with a pistol and Goose (don’t look close if you don’t want spoilers) in addition to the Kree Sentry’s right arm. Captain Marvel comes with a swappable head, one with and without the cowl, as well as flat hands that can be swapped with fists. Yon-Rogg is the leader of StarForce and has a great metallic finish to his suit, as does Captain Marvel. Talos is a Skrull and presumably a villain, with a rubbery cloak.

The other figures in the collection are Captain Marvel with a jacket, Marvel’s Grey Gargoyle, and Genis Vell.

Three dolls were sent to us, offering two different types of play. For kids who love toys that react to the press of a button, the Photon Power FX Electronic Doll is guaranteed to thrill. Pressing the StarForce emblem on her chest activates two different light and sound sequences. The first lights up her fist as a power up sound plays. The second adds lights to her star and face while an action sound plays. This doll features a plastic suit that is molded to the character, removing any fashion elements. Because of the light features, her head and arms have less mobility than the others and her head has a weird ridge around her hairline. 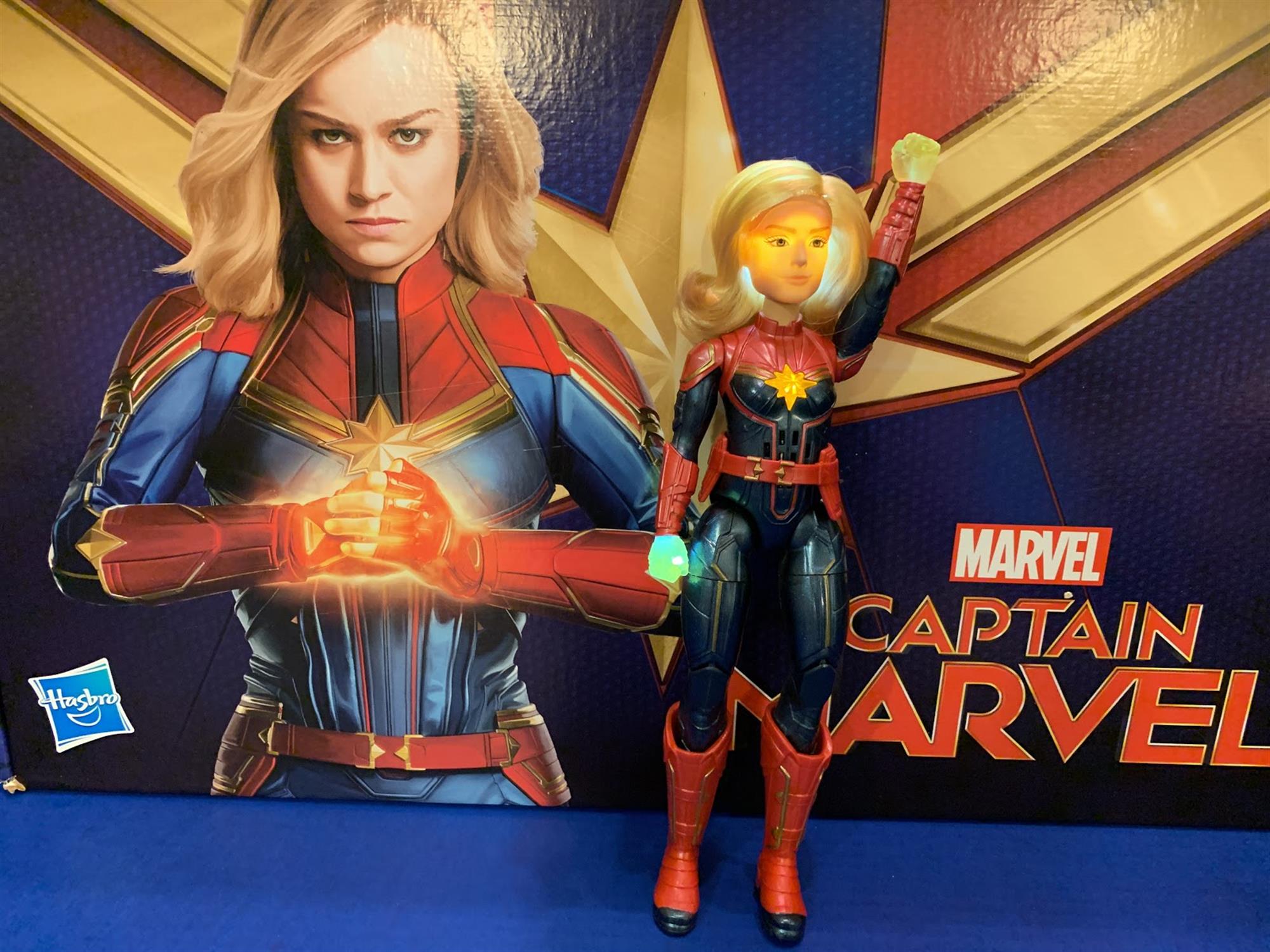 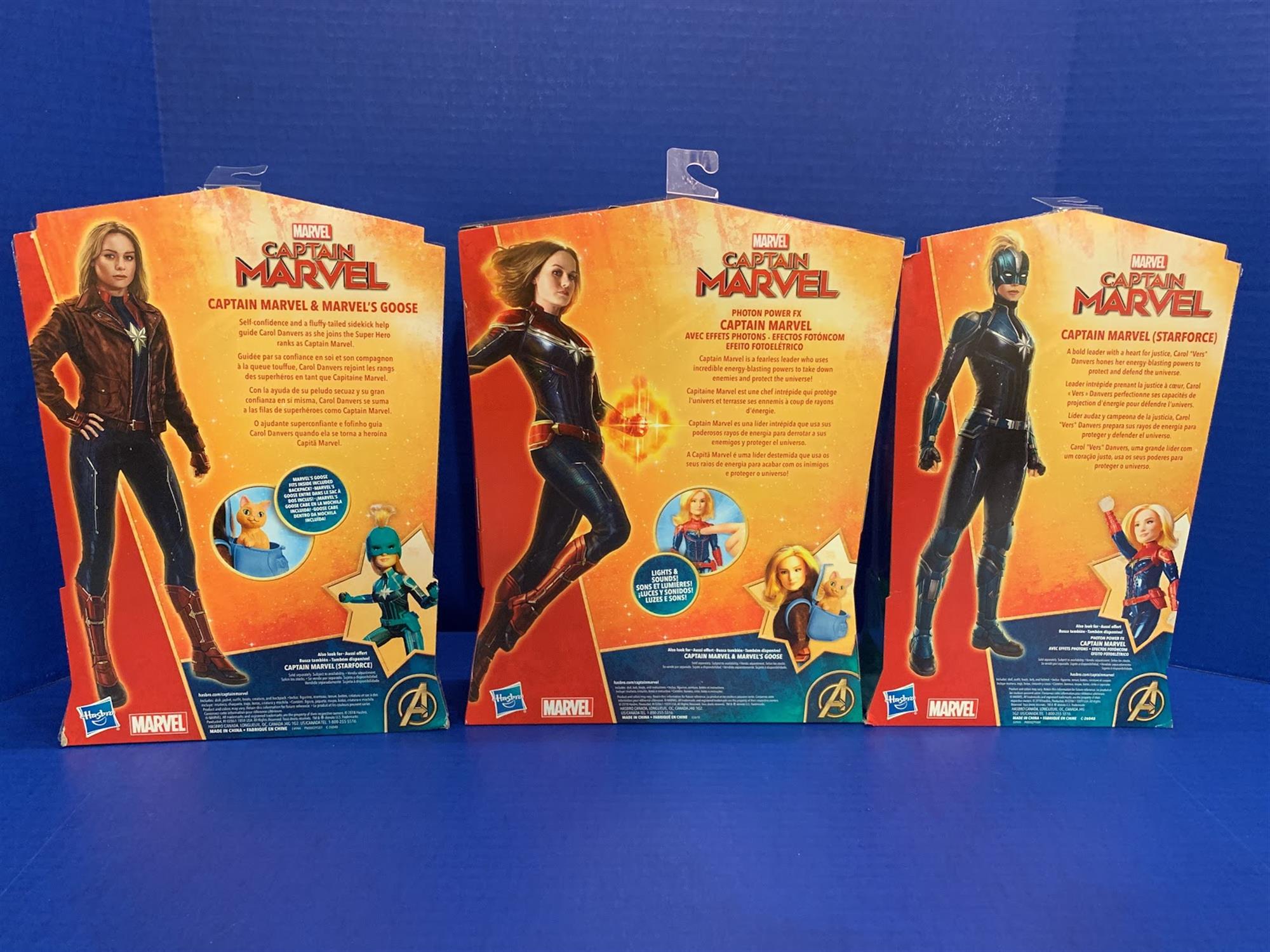 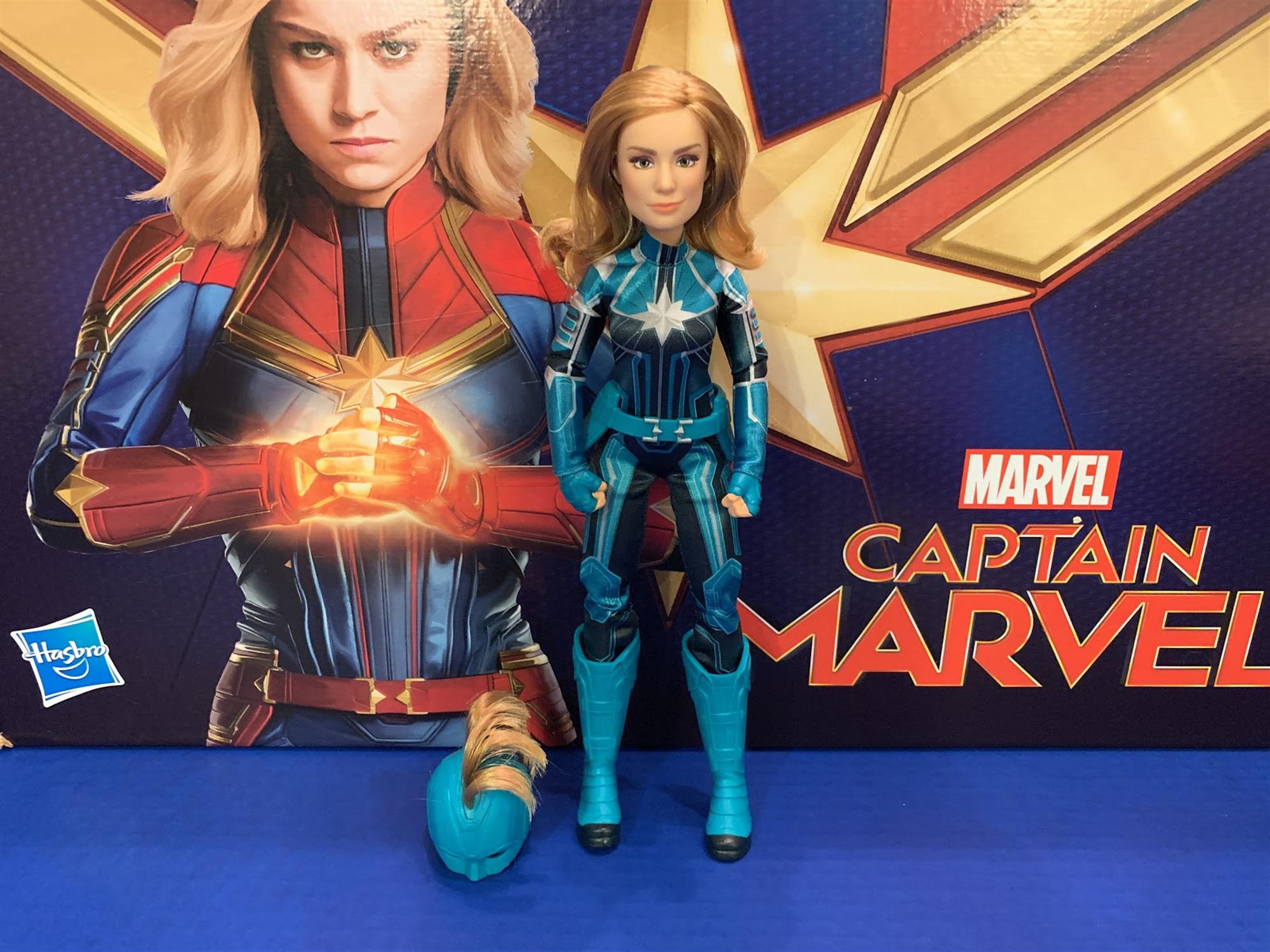 The other two dolls are more along the lines of what you expect. “Captain Marvel and Goose” features Carol Danvers in her iconic suit with a pilot jacket. She comes with a backpack and a plastic figure of Goose the cat, who fits in the backpack. The other figure features Captain Marvel in her blue StarForce suit. She includes a helmet with a mohawk that can be placed onto her head.

The final item in the box was a Photon Power FX Glove. A plastic battery powered device clasps on to your wrist and your right hand goes in an open fingered glove. Pressing the star on the device activates the lights and sounds and it will keep interacting with you until it lays motionless for a short time. It’s similar in play style to the Iron Man reactor toys. 2 AAA batteries are included and can be replaced with a phillips head screwdriver. 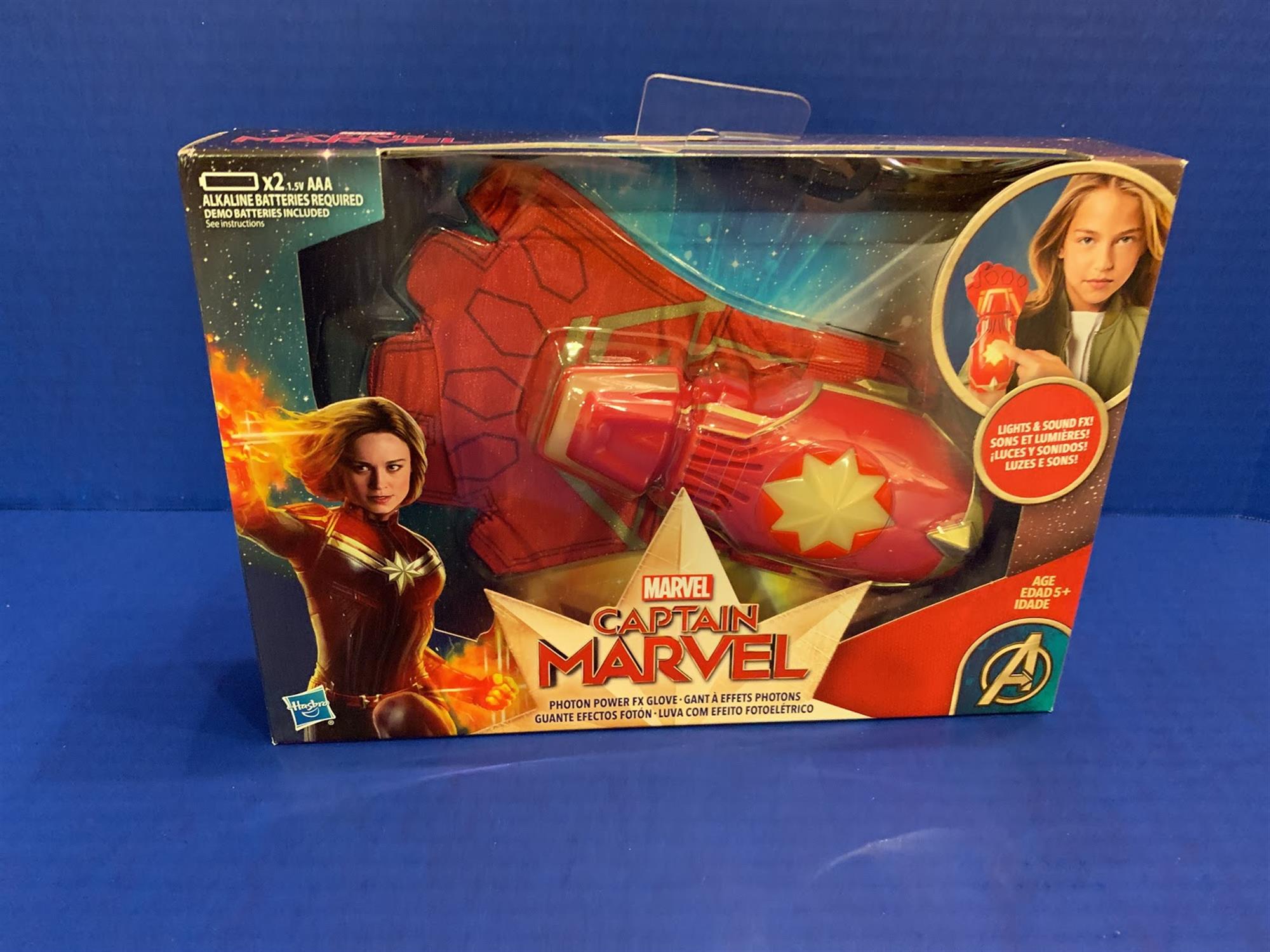 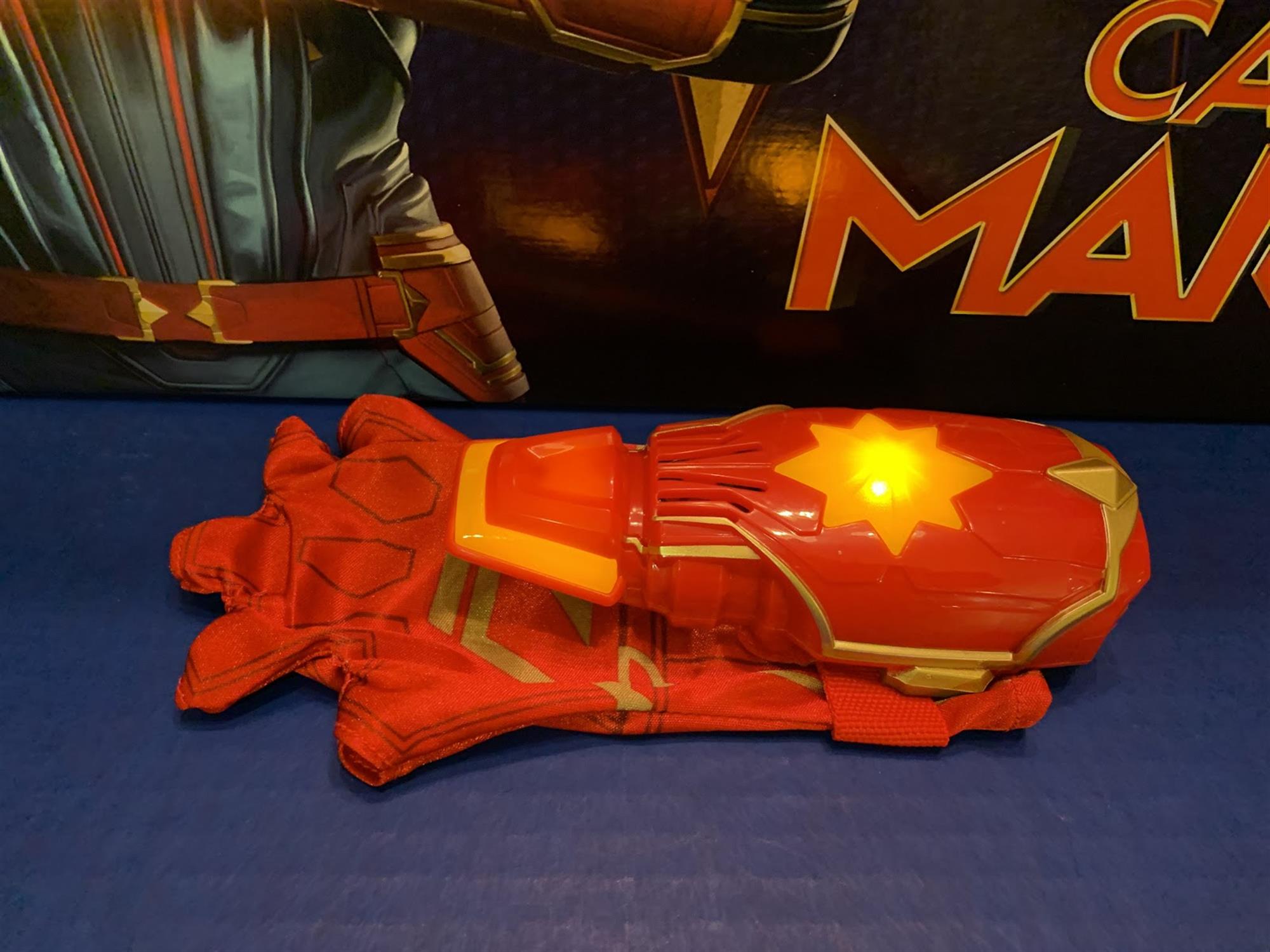 This box of Captain Marvel toys made me even more excited to see Marvel Studios’ Captain Marvel on March 8th. All of these toys are now available in stores and online. Happy shopping!