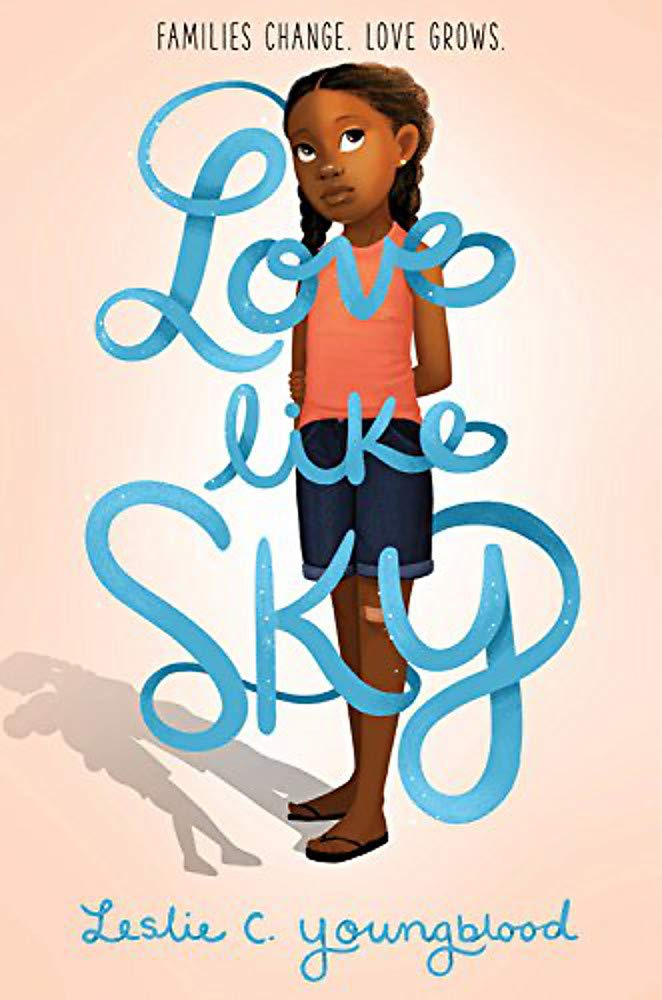 Leslie C. Youngblood’s debut novel, Love Like Sky, is a story aimed at middle school readers about the power of love and how it affects families. It features some powerful relationships that aren’t often represented in mainstream media, the kind of story you won’t find on Disney Channel but that is certainly common in the lives of millions of kids and parents. Whether you come from a broken home or not, readers will find something to identify with in this heartwarming story.

G-Baby and her little sister Peaches aren’t used to their new home with their mom, stepfather, and stepsister yet, still trying to find their place in it. They also aren’t used to their dad’s new wife or the fact that they don’t get to see him as much anymore, or their old neighborhood and friends. With so much change in her life, G-Baby is just trying to make everything work through her unhappiness.

In a rebellious moment, G-Baby sneaks out to see an old friend and while away, her younger sister comes down with a serious illness that keeps Peaches hospitalized indefinitely. This sends G-Baby’s world spiraling even more out of control, kept away from the one person she is closest to. After trying to be friends with her Stepsister Tangie, the teenager finally comes around while Peaches is out of the house, but G-Baby suspects that her new sibling might be hiding something.

Love Like Sky gets its title from a line one of the parents says when explaining to the kids how much they are loved. They use the sky as an analogy since it is vast and you can’t see where it begins or ends, a seemingly infinite unit of measurement. It goes on and on forever, whether you get to see the ones you love every day or won’t see them for a while.

Despite the dramatic setup, Love Like Sky is so broken up that the narrative loses steam in the second act. G-Baby’s world has been trisected between her split parents and her old friends. A subplot concerning G-Baby’s relationship with friends from her old neighborhood takes the focus off the main story, but ultimately proves meaningful for readers who stick through it.

G-Baby is in middle school and on the cusp of leaving her childhood behind. Leslie C. Youngblood does a great job of reliving those in-between years and part of the story’s brilliance is that this is yet another way that the main character’s life is breaking apart. She still has typical interests for a kid, but is also having romantic feelings towards a classmate.

Anyone should be able to connect with and appreciate the relationships in Love Like Sky, but I imagine it would be particularly meaningful for kids who come from “blended up families.” It’s a story that can be a source of comfort for kids with parents going through a divorce. But Youngblood does such a great job of creating well rounded characters and a realistic world that you will empathize with everything G-Baby is experience from start to finish.