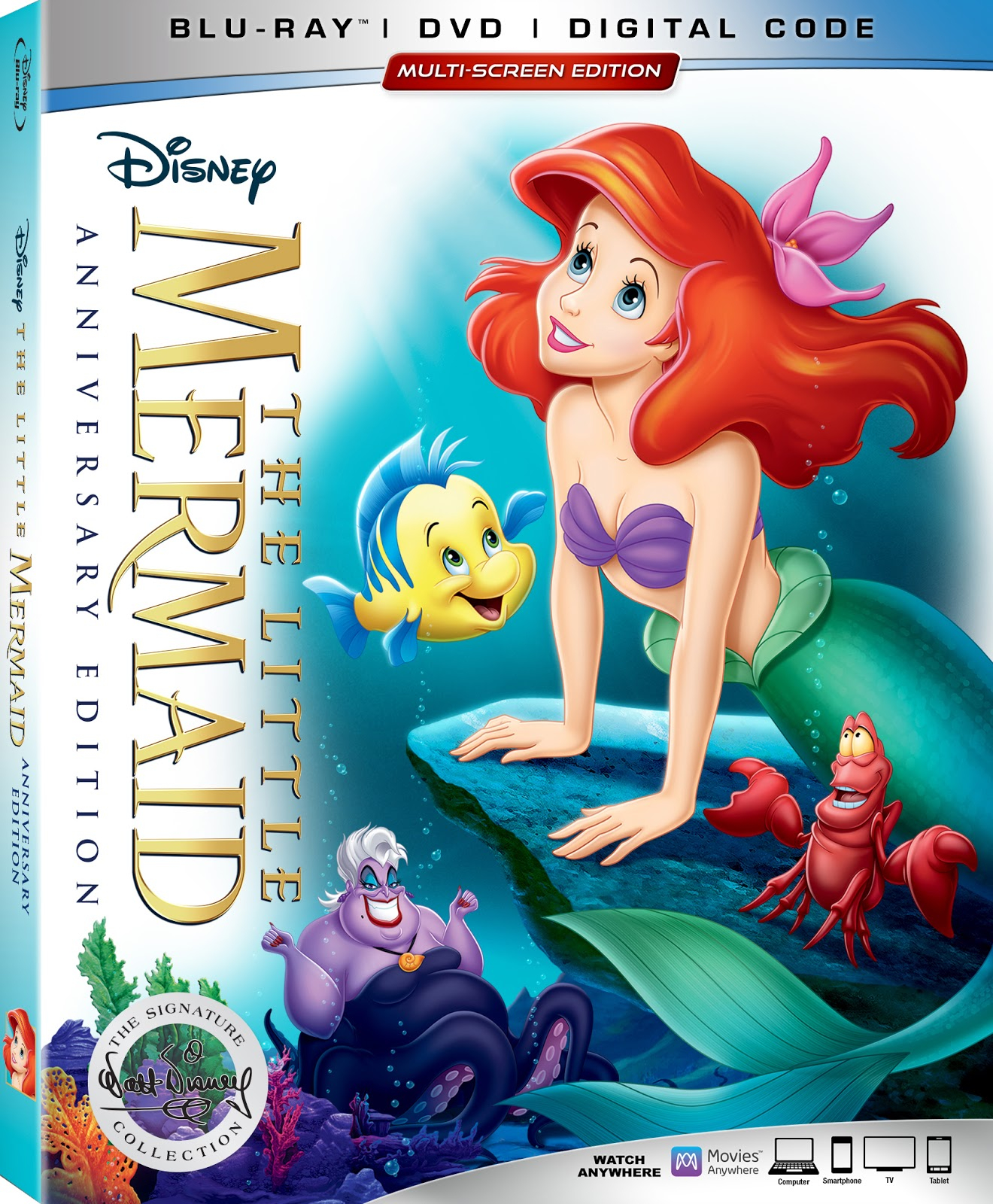 The eighth entry in the Walt Disney Signature Collection is The Little Mermaid, which splashes onto Blu-Ray and 4K on February 26th. As is now common for the Signature line, the Blu-Ray repeats the transfer from the previous Diamond Edition and ports over all of the bonus features, split between the Blu-Ray disc and the included digital copy. With new bonus features, diehard fans will likely want to pick it up again, while casual fans already have most of the good stuff.

Ariel is a mermaid who dreams of life out of the sea. After falling in love with a human, she makes a deal with Ursula the sea witch to trade her beautiful voice for human legs. But once out of the water, she discovers that she’s now a pawn in a bigger scheme to steal her father’s crown.

If any post-Walt animated film belongs in the Walt Disney Signature Collection, it’s The Little Mermaid. It single handedly reinvigorated the animated medium, opening the door for the Disney Decade and all the great films that came in its wake, including Beauty and the Beast, Aladdin, and The Lion King. In addition, Walt Disney personally tried to develop this Hans Christian Andersen story and was unable to make it work.

The Academy Award winning music by Alan Menken and Howard Ashman also reinvigorated interest in Disney music and brought back the animated musical. “Part of Your World” is the ultimate “I Want” song, “Under the Sea” is insatiably catchy, “Poor Unfortunate Souls” ensured that Disney Villains would get their own song for decades to come, and “Kiss the Girl” is unforgettable. While Alan Menken would later produce music that is more acclaimed or revered, the score from The Little Mermaid is still among the finest ever written.

Celebrating its 30th anniversary this year, the Walt Disney Signature Collection release of The Little Mermaid adds new retrospective bonus features to over three hours of previously released content, all of which is included when you redeem the included digital copy.

The transfer used for this Signature Blu-Ray edition is identical to the Diamond Edition Blu-Ray release. It includes the modifications made for the 3D edition, including the additional end credits. However, this is the corrected version that the later pressings had, it does not repeat the swapped shot debacle from “Part of Your World.”

In terms of quality, the film looks great. While grain has been eradicated from nearly every shot, there is no evidence of DNR washing away details. Colors also feel accurate, with softer, subtler tones that don’t feel ramped up in an effort to make the film look more modern. In other words, it’s about as faithful as an animation restoration can be while still offering a modern HD presentation.

The English 7.1 DTS-HD Master Audio mix is identical to the one from the Diamond Edition. Score and sound effects travel around the room, creating an immersive experience that puts you under the sea and in Ariel’s world. Other audio options are French and Spanish 5.1.

The Little Mermaid is one of my favorite films and the first one I remember seeing in a theater as a kid. Any excuse to revisit it is always a treat and this Walt Disney Signature Collection anniversary edition adds a few insightful and nostalgic bonus features to a collection of worthwhile behind-the-scenes content. There are quite a few ways to get this release, as detailed below.