Movie Rewind: The 30th Anniversary of “Indiana Jones and the Last Crusade”

May 24th, 1989: Indiana Jones was back on the big screen and this time he brought his dad. I remember that tagline on the movie posters and it stuck with me as I sat down in the theatre to watch the movie. I would go on to see it twice in a theatre that no longer exists and believed then and now that Indiana Jones and the Last Crusade is the greatest film in the series. With the thirtieth anniversary of the film upon us, and for fans who are still waiting for summer 2021 when Indiana Jones 5 comes out, it’s time to rewind back to the summer of 1989 and explore if Indiana Jones and the Last Crusade is still as good as it’s first showing.

This movie has all the 1980’s hallmarks for a successful film. George Lucas as producer, Steven Spielberg as director, and Harrison Ford as the lead character. This was the dream team of film making, and a guaranteed box office success.

The movie starts off with the audience seeing the young Indiana Jones on a boy scout trip. We watch as he finds treasure hunters unearth the Cross of Coronado and steals it from them in the hopes of placing the item in the rightful hands. Little does Indiana Jones know that the rightful owners are the ones who found it.

For the first time in three movies, we see someone else be Indiana Jones, and the late River Phoenix not only shows the spunk and tenacity that Harrison Ford always displayed on the big screen, but we saw through this experience how the man we have met before came to be.

The circus train sequence and how young Indy escapes the treasure hunters gives us so much detail about why Harrison Ford’s older Indiana Jones is the way that he is. From a young age, Indy believed that historical items needed to be on display, in a museum for all to see and not kept in someone’s private collection. We see as Indy falls into the container of snakes on this train why he is so deathly afraid of them. River Phoenix conveys the horror of this moment with his facial expression, and audiences can understand why snakes are a phobia for the older Jones.

This nightmare ride on the circus train ends with Indy escaping, being ignored by his father and told to count to twenty in Greek, while his dad draws a picture for his grail diary. So much is said through the short exchange with Phoenix’s Indy and the offscreen elder Henry Jones. Indy is a boy who is second in importance to his father’s work. 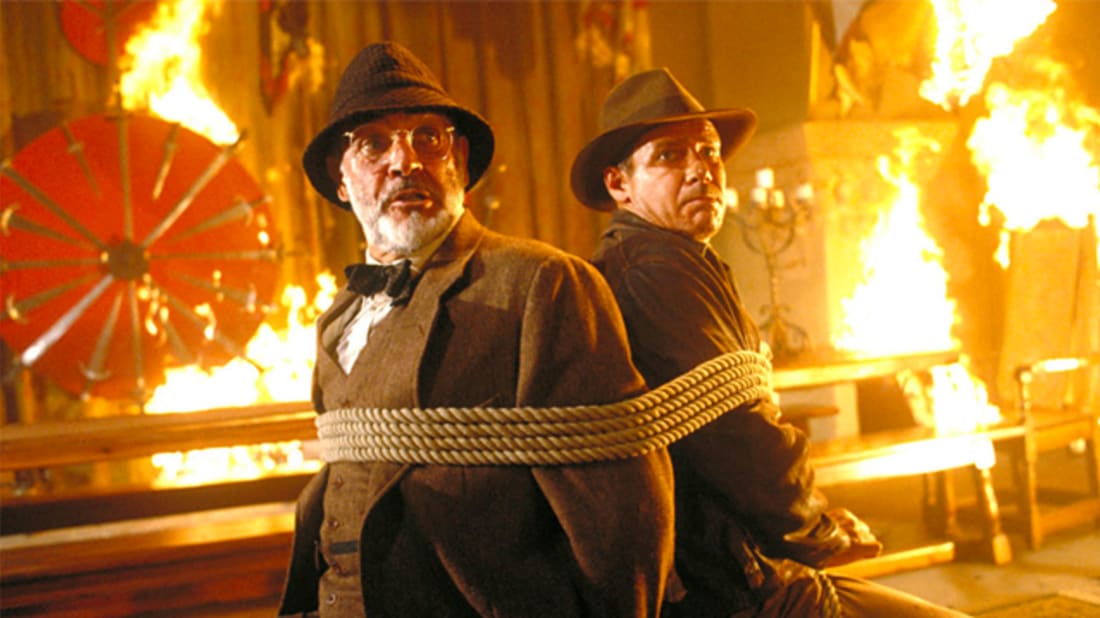 We see how Indy got his trademark fedora from the treasure hunters, lost the cross of Coronado and then we are flash forwarded to the present, 1938, where Indy gets punched in the face by bad guys. So much transpires in that first ten minutes in character building. We finally get to see why Indiana Jones is the way that he is. Plus, we get to see Indy come back to his college and meet up with Marcus Brody with success. He retrieves the cross of Coronado.

Back at his college, Indy is accosted by a businessman named Walter Donovan who shows him a relic that alludes to the location of the holy grail. He also learns that his father, Henry Jones Sr., has vanished while in Donovan’s employ searching for the item. Henry’s house has been ransacked, and the grail diary that his father has built for decades was sent to Indy just that day. Like any caring son, Indy goes off to Venice in search of his dad.

He doesn’t go alone. Marcus Brody, his friend, museum director, educator and certainly no man of action, goes with Indy. The inclusion of Brody on the adventure, played superbly by the late great Denholm Elliott is yet another example of why Indiana Jones and the Last Crusade is an amazing movie. Brody has no business being on the adventure. Brody is an academic, and he fills the father role to Indy; he will obviously be replaced by Henry after he and Indy are reunited. Viewers are rewarded with Elliott’s quizzical, semi confused approach to how Indy does his job.

When Indy finds his father locked up in a Nazi castle in Austria, he is not greeted by a warm embrace, but is hit over the head with a vase by his father. Henry Jones Sr. thought it was the Nazis. His son informs him that they come in through the doors and not the windows. This is just the first moment of hilarity that will continue throughout the film with Connery and Ford.

Harrison Ford is a great actor, and though he is labelled as an action hero, he is a skillful thespian. Ford seamlessly transitions from action hero to son of a task master father when he initially rescues his father. Dazed by the blow to the head, we watch as the tough guy Indy is reduced to a child. From small facial expressions, to his responses to his dad, Indy is no longer the successful archeologist, but a kid hoping to please his father. Responding with words like ‘yes sir’ and a plea to his dad to not call him junior, Indy is thrust back to his childhood, and Ford brilliantly shows this on screen.

From Austria to Berlin and the Middle East, we watch as Indy pieces the clues together with his dad, Marcus, and his friend Sallah, played by John Rhys-Davies who is reprising his role from Raiders of the Lost Ark, as they fight the Nazi’s and find the Holy Grail.

Does the Movie Hold Up?

Yes! The scale of this movie and how it brings in new blood to a well-established series alleviates any worry of franchise fatigue. Coming off the much darker in tone Indiana Jones and the Temple of Doom, Lucas and Spielberg bring a much more human and relatable Indiana Jones with their third movie.

He is no superhero. We see that Indiana Jones is a normal guy who gets into very difficult and dangerous situations and gets hurt like any normal person. When his father hits him on the head with the vase, Indy is genuinely stunned and takes several minutes to recover his wits and carry on with the rescue. Indiana Jones is human, and for that he will always appeal to an audience. Indiana Jones and the Last Crusade continues to be a great film that is just as exciting as seeing it for the first time in the theatre in 1989.

I have watched Indiana Jones and the Last Crusade hundreds of times over the last thirty years and though they are thirty years old, the jokes are still funny. When in the middle of freeing his father from the Nazis for the second time, Indy rides by with horses for everyone and you can faintly hear him laughing at the Nazis. When Indy does meet up with Sallah, he sees Sallah has camels too as compensation for the loss of his brother-in-law’s car. Indy tells him that he said no camels, but that’s five camels and he asks Sallah if he can count. The dialogue between Indy and his father Henry is dripping with the testiness that every father and son experience. Testiness and short tempered, Ford and Connery play up the father son role with perfection. On the beach after Henry has blown up the Nazi plane by scaring seagulls into it, there is a perfect shot of Harrison Ford who sits and marvels at what his father had done, and how even though we know Indy’s role is not something his father is cut out for, Henry Jones still can surprise his son.

Having reveled in the glory of this film, I wonder when Lucasfilm is going to activate this valuable and lucrative property. A proposed Disney+ series about Willow is making the rounds but nothing has been announced about the famed archeologist except for the delayed fifth film set to premier in July 2021. Indiana Jones fans would love to see the world of Henry Jones Jr. back on the big or small screen sooner than later.