The Disney vault opens once again on June 25th for an evening of sleuthing hijinks. Mystery is afoot as Leonard Maltin curates a collection of live-action Disney sleuthing films, a genre not often associated with the studio. But perhaps the biggest mystery of all is the absence of That Darn Cat, which I’ve been patiently awaiting throughout the four years the quarterly programming block has been running. It’s arguably the most famous Disney film in this category, but we do get another Hayley Mills film plus a Dick Van Dyke oddity, two films you’ve probably never heard of, a 1970’s comedy, and two on-theme animated shorts. Gather your candlesticks, lead pipes, rope, or another weapon of choice and gather around your television set for a night of mystery, intrigue, and mild family-friendly suspense. 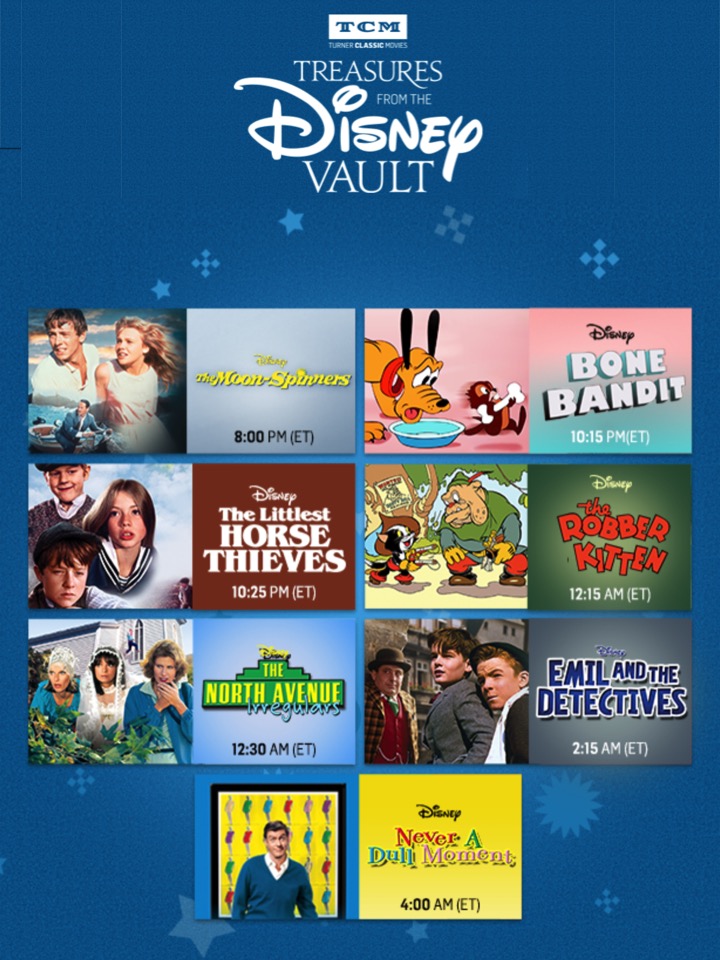 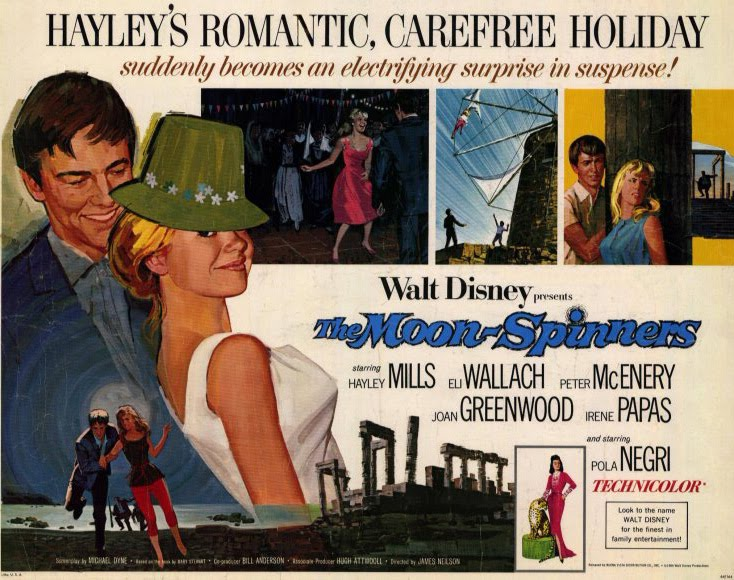 Hayley Mills stars in her fifth Disney film, a mystery and suspense picture based on a novel by Mary Stewart. Filmed on location in Greece, this film feels apart from the Disney library for a number of reasons, including the more suspenseful tones and the incohesive plot. In my opinion, it’s Mills’ worst film in the Disney library.

Nikki (Mills) is accompanying her aunt on a research trip in Greece and their troubles begin when they arrive at a hotel called “The Moon Spinners” to find that they are unwanted guests. Nikki strikes up a friendship with another British guest named Mark and she soon gets wrapped up in a jewel thief plot when she finds Mark with a bullet wound. The adventure to outrun the criminal and lock him up includes a daring windmill escape, a chase through a festive parade, and the most eccentric yacht in any Disney film.

Silent film star Pola Negri was coaxed out of retirement by Walt Disney to play the role of Madame Habib and the actress requested that the character have a pet cheetah. The film was a box office dud and was more widely seen through television airings. But Disney shareholders in 1964 couldn’t have been too worries, as Mary Poppins was released this same year.

Recommendation: The night gets off to a slow start with “The Moon Spinners,” a skippable film on nearly all accounts. Mickey’s best friend Pluto is pestered by a gopher when trying to retrieve a bone he buried in the garden, an important load bearing column in the gopher’s home. Pluto gives the rodent a good fight and the little guy fights back. The game goes back and forth with each animal trying to one-up the other to get the bone back.

Recommendation: “Bone Bandit” is fun and you can’t miss the first animated short of the night, but it’s not as memorable as the pup’s more heartwarming shorts. This British made Disney film made its US debut on a double-bill with the package feature The Many Adventures of Winnie the Pooh in 1977. However, the period piece actually hit theaters in the UK in 1976, known in its country of origin as Escape from the Dark. While it’s not a mystery, it does center around a crime of sorts, but one in which the audience roots for the thieves.

Set in a coal mining town at the turn of the century, three children band together to save the pit ponies when the mine’s owner decides to replace them with machines. They devise an elaborate plan to sneak the ponies out through an abandoned elevator system before they can be sold for slaughter. But the kids will soon discover that they will need a lot of help to save the beautiful animals that supported their community for so many years.

Recommendation: Give “The Littlest Horse Thieves” a chance to win you over. A young kitten dreams of becoming a menacing thief in this classic Silly Symphony short. He runs away from home and teams up with a wanted criminal but soon finds himself in the kind of trouble that can only be solved by going home, even if it means taking an unwanted batch.

Recommendation: “The Robber Kitten” is the better of the night’s two animated shorts. Don’t miss it. Loosely based on a true story, The North Avenue Irregulars mixes elements of a detective crime bust with a typical 1970’s Disney comedy, wacky car chase included. But what sets The North Avenue Irregulars apart from other Disney comedies of the era is its female heavy cast and some of the revered actresses in lead roles, including Barbara Harris (Freaky Friday), Patsy Kelly (also Freaky Friday), Cloris Leachman (Herbie Goes Bananas), and Susan Clark (The Apple Dumpling Gang).

Edward Hermann (Gilmore Girls) plays a reverend who moves to a new town to lead the North Avenue Presbytarian Church. When he entrusts one of the parishioners with one of the church’s funds, he soon discovers that the money has been gambled away and that they entire town is ruled by an illegal ring that has even corrupted the police. When government officials task him with gathering some men to expose the crime ring and find their leader, the only members of the community willing to assist are six women.

As progressive as The North Avenue Irregulars was, it is equally chauvinistic with the dialogue, but the girl power message of the film overcomes some late-1970’s misogyny. While the dialogue is lackluster and the premise is weak and predictable, the performances of Barbara Harris, Patsy Kelly, and Cloris Leachman shine through and result in some pretty big laughs. 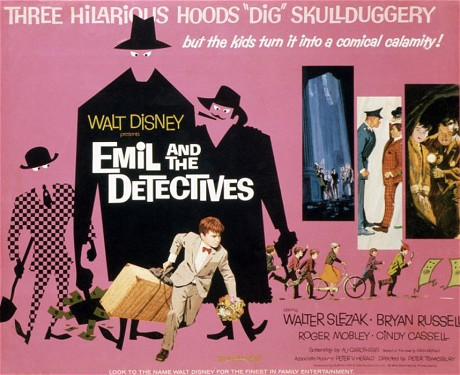 Based on a popular children’s book from the same author that wrote the source material for The Parent Trap, Emil and the Detectives keeps the story in the author’s native country of Germany. Filmed in Berlin, the narration and tone of the film is reminiscent of Ralphie’s flashbacks in A Christmas Story. The score is often lighthearted and upbeat and in many of the more outlandish scenes, the action gets sped up, just like in the 1983 MGM Christmas classic.

Emil is taking a bus alone to visit his grandmother and is pursued by a “Skrink,” a zany thief in a bright checkered suit. When Emil discovers the money has been stolen, the only help he receives is from a group of amateur detectives his own age, led by a jack of all trades named Gustav. With the help of a community of boys, Emil will work with the boys to help catch his thief and take down a ring of Skrinks.

There’s a unique brand of charm to Emil and the Detectives that is hard to replicate. It’s very much a film of its time, with one of the boys offering Emily a cigarette (don’t worry, it’s candy!) and that same boy causing havoc for his boy crazy sister. And while the cast is primarily American, the film was shot on location in Berlin around the same time The Sound of Music would have been in production in Salzburg.

Recommendation: “Emil and the Detectives” is a fun and obscure Disney film that deserves a little love. Make room on your DVD for this one. Dick Van Dyke made three films at Disney in the 1960’s and his final Disney film pre-Mary Poppins Returns came out the same year as Chitty Chitty Bang Bang. One of his 1968 films became his second most famous film role and the other has an ironic title. I’ll let you guess which is which.

Jack Albany (Van Dyke) is a television actor rehearsing a gangster role when he is confused for the real gangster named Ace and is brought to the big boss by some goons. Trapped in the home of the eccentric Leo Smooth (Edward G. Robinson), his situation gets even more complicated when the real Ace shows up. His only hope of escape rests in the hands of Smooth’s art teacher, played by Dorothy Provine (That Darn Cat!)

Never a Dull Moment lives and dies by its physical comedy, with a climax set inside a modern art museum. It never gets particularly exciting or funny and try as he might, Dick Van Dyke can’t make enough silly faces to change that.

Recommendation: Skip this dud and go to bed.

I always appreciate when Treasures from the Disney Vault has a cohesive theme that lasts the whole night. There are a few gems in this sleuthing lineup, but they’re not the films with the biggest stars like Hayley Mills or Dick Van Dyke. The standouts are The Littlest Horse Thieves plus Emil and the Detectives and the animated shorts. The North Avenue Irregulars has its moments, but The Moon Spinners and Never a Dull Moment are wise choices to skip.

Treasures from the Disney Vault is scheduled to return on September 2nd with a less cohesive theme with films like Fun & Fancy Free, The Love Bug, The Happiest Millionaire, Snowball Express, The Misadventures of Merlin Jones, and some Donald Duck and Goofy shorts.