Bright Suns everyone and welcome to a photo comparison of Star Wars: Galaxy’s Edge lands. Now that we are less than a month away from the public opening at Disney’s Hollywood Studios in Walt Disney World, Cast Member previews have begun. Not only were we lucky enough to attend but, due to the fact that the land has been open in Disneyland for a few months, we’ve been able to take all of the Batuu pictures and video we want. Of course, the lands are basically the same on both coasts with Millennium Falcon: Smugglers Run, Oga’s Cantina, Savi’s Workshop, and many other retailer locations and quick-service locations being very much mirrored. However, the land as a whole has a very different look due to the color palettes differing due to the way the sun hits and affects the lands. Also, as the Disney’s Hollywood Studios land is just in its first day of previews, not all the propping is complete, so some things could change before the official opening. That said, overall, the look is mostly complete.

First, let’s start with the walk into the land from the front to the back that was shot as part of the first group let in during the first preview day.

Now that we have seen the land from the outskirts, we can take a closer look and compare the WDW version to its sibling at Disneyland. The photos that follow are taken as close to the same spot and angle as possible (the layout for both lands are not exactly the same) and, of course, the weather plays a part in the background of the photos. But, looking at these, you will see what a difference the colors of the land can change.

**Disneyland Star Wars: Galaxy’s Edge are the top photos and Disney’s Hollywood Studios are the bottom** 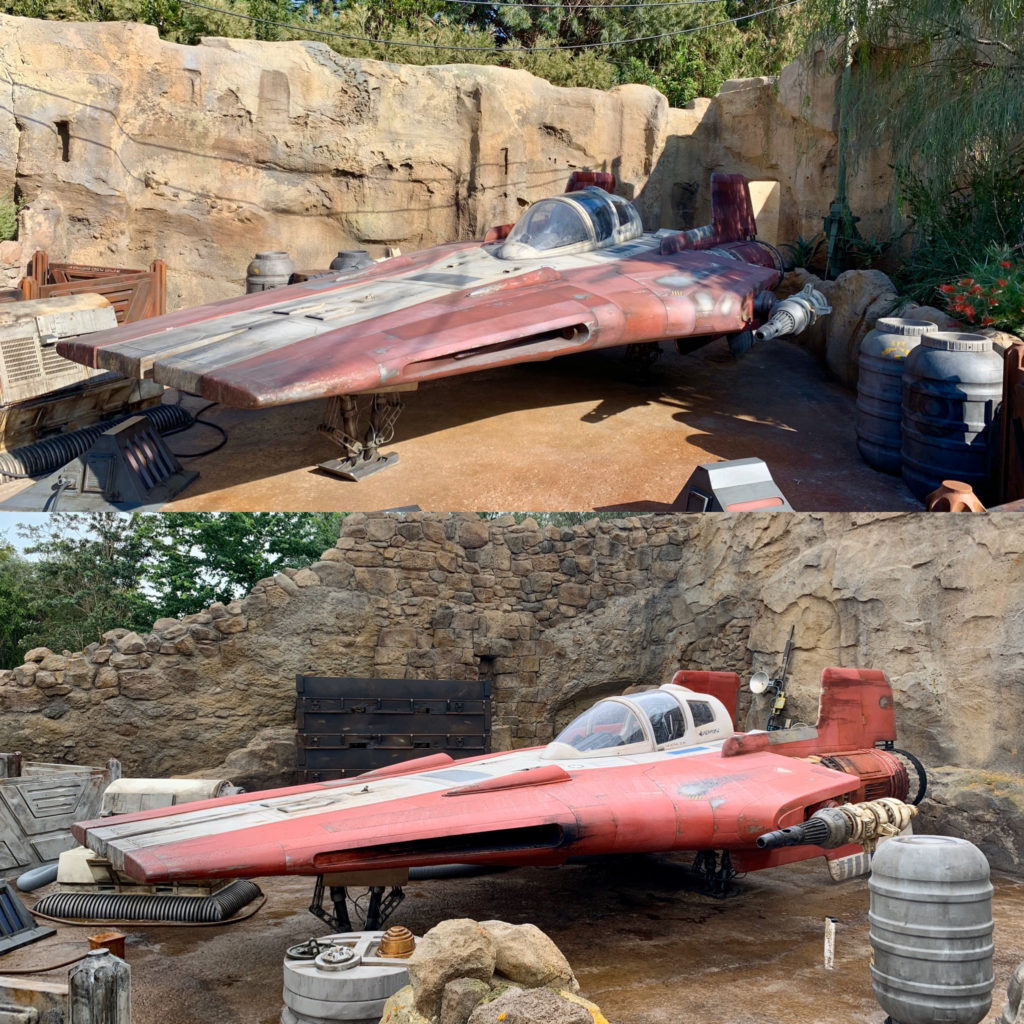 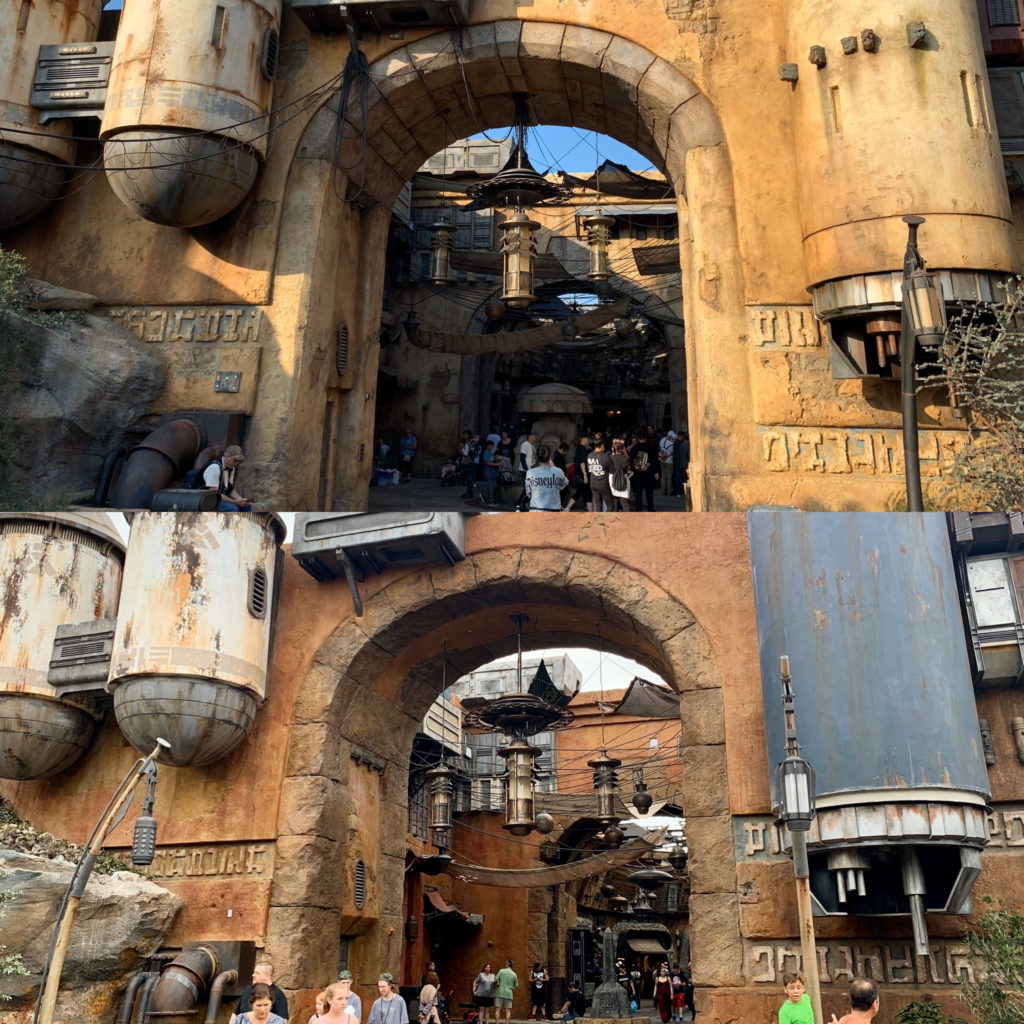 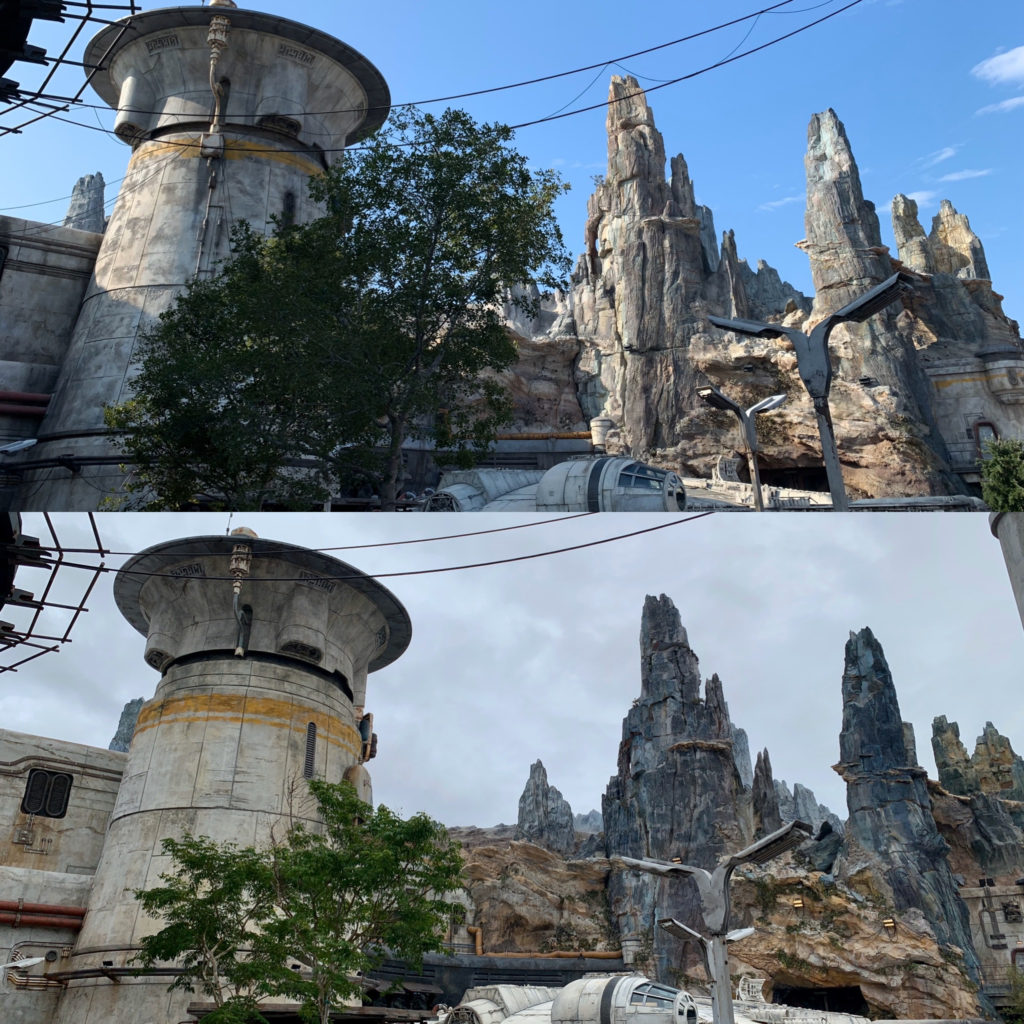 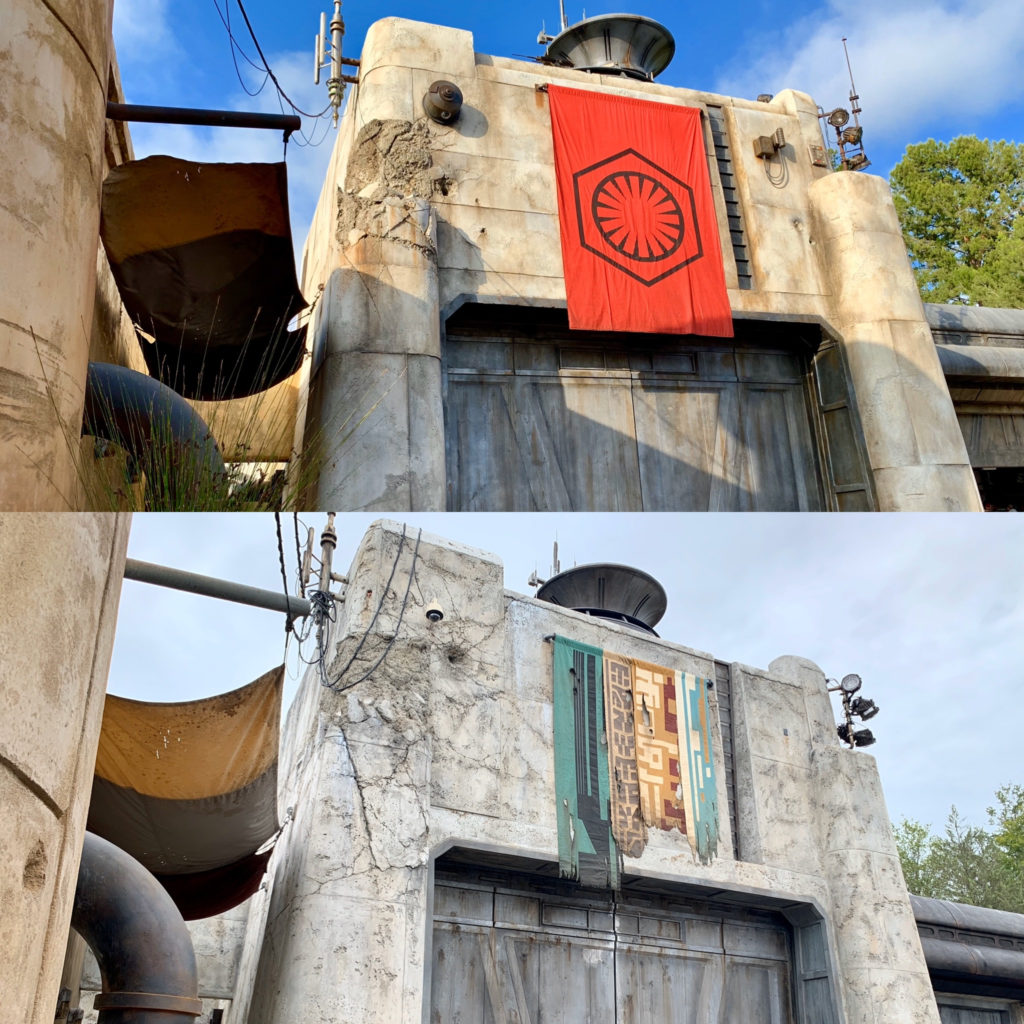 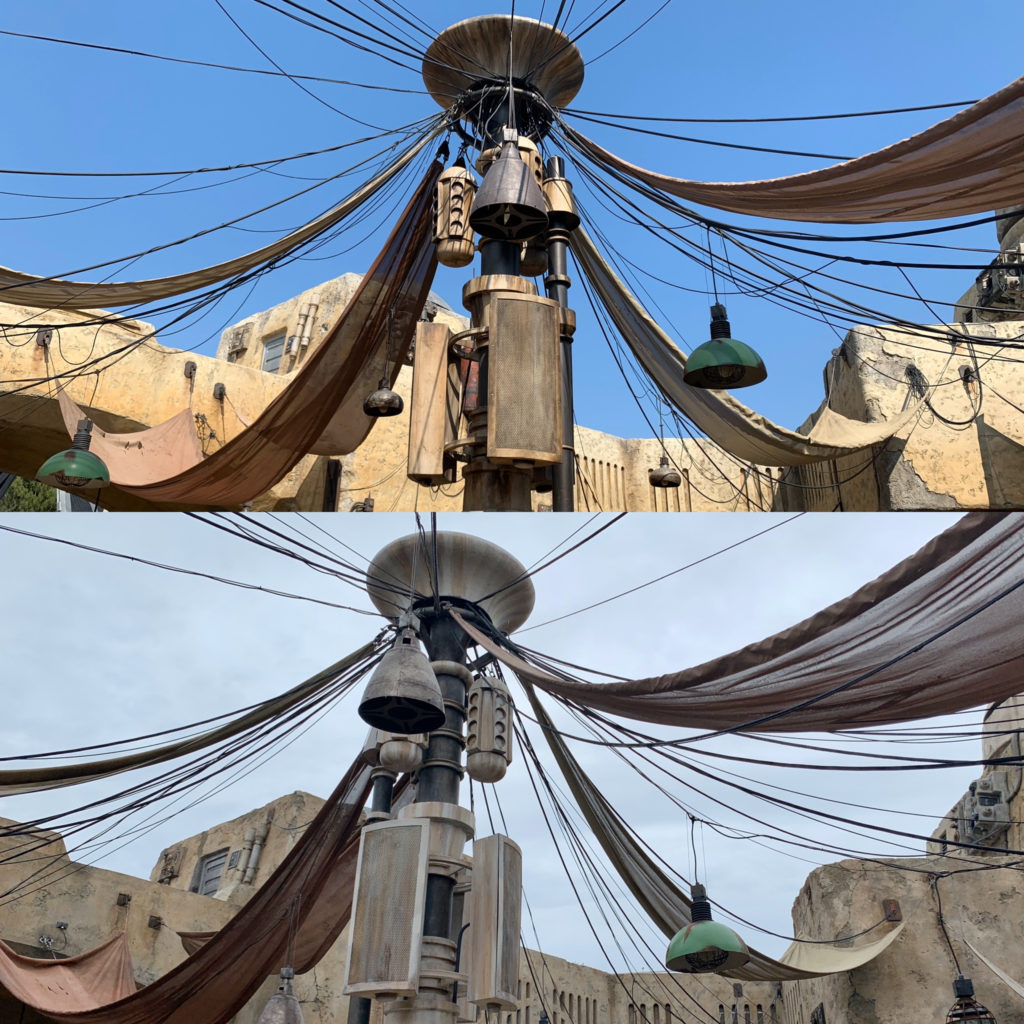 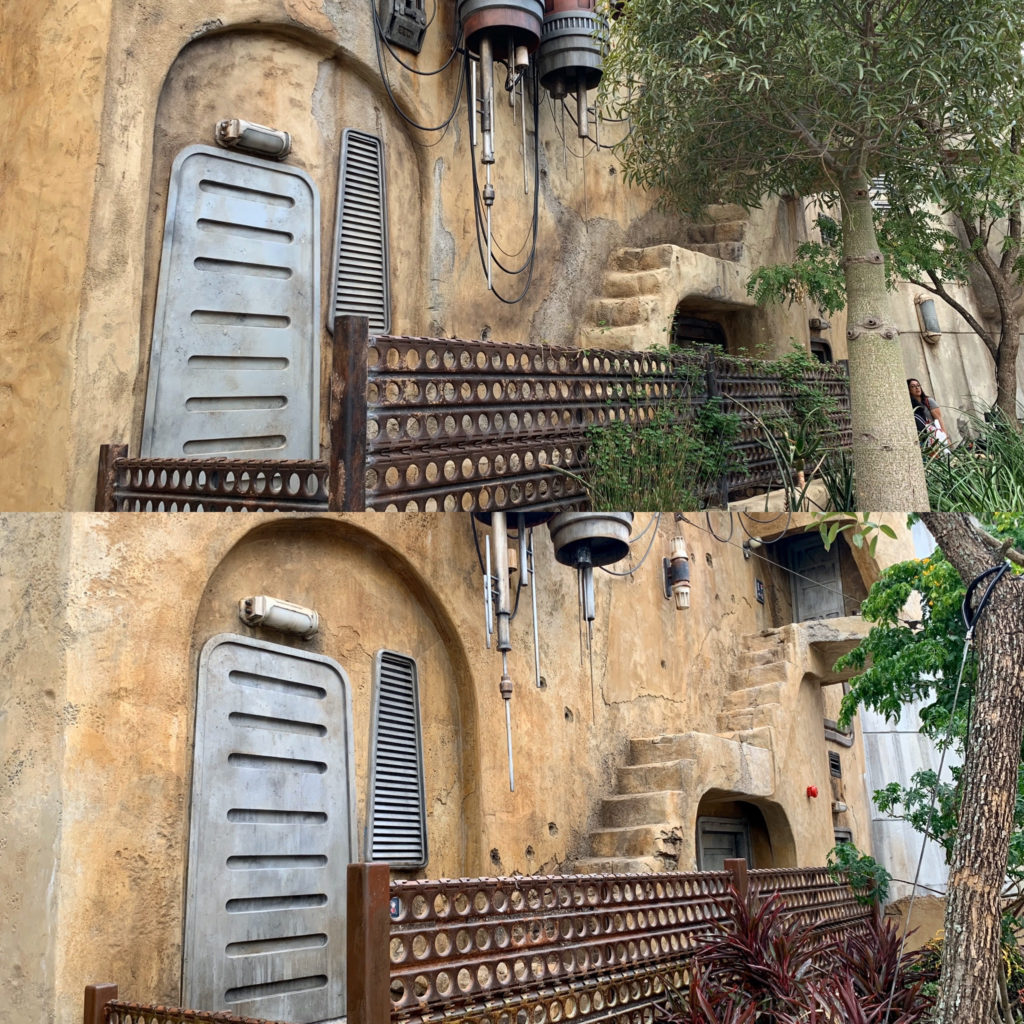 One of the most unique things about Star Wars: Galaxy’s Edge is while, in the past, WDI has created attractions at the same time for different parks, they have never created an exact land. So seeing the colors and small touches that differ from opening day in Disneyland vs the first day of previews at WDW was very interesting. One of the things I was asked after my visit to Disney’s Hollywood Studios was “which do I like better?” and my answer was, of course, “yes.” But, when pressed there really isn’t any difference that makes one better than the other, I mean it is Star Wars: Galaxy’s Edge, it’s amazing. However, I did pick the Walt Disney World version as my answer purely on the fact that it is down the road from where I live.

Oh, and one last thing: if you don’t want to spend the money (really it is very much worth it) to visit Savi’s Workshop and build your own lightsaber, here is a video of the full experience.