Marvel has a very wide range of characters. Dark action heroes like Wolverine, true superheroes like Captain America and relatable characters like Spider-Man. Then there are the bizarre, hilarious, fourth wall-breaking characters like Deadpool. But if you’re a fan of Deadpool and all his ridiculous antics, you’re going to love Gwenpool.

The much lesser known character has her own new mini series and she couldn’t be more excited about it. That’s right, I just told you how Gewnpool feels. That’s because, despite “Gwenpool Strikes Back #1” being the first I’ve ever read of the character, I feel like I know her now. Mostly because she spends the first few pages explaining her backstory herself. Gwenpool’s fourth wall-breaking puts Deadpool’s to shame. In fact, the entire existence of this new series is a fourth wall break. Gwenpool is actually just a comic fan who has somehow gotten herself into the comic universe. Doctor Strange tethered her there so now she can’t get back, which she is perfectly fine with. The only problem is, readers don’t find her interesting enough for her to keep getting her own stories. So, if writers don’t write stories for her anymore, she’ll disappear forever. 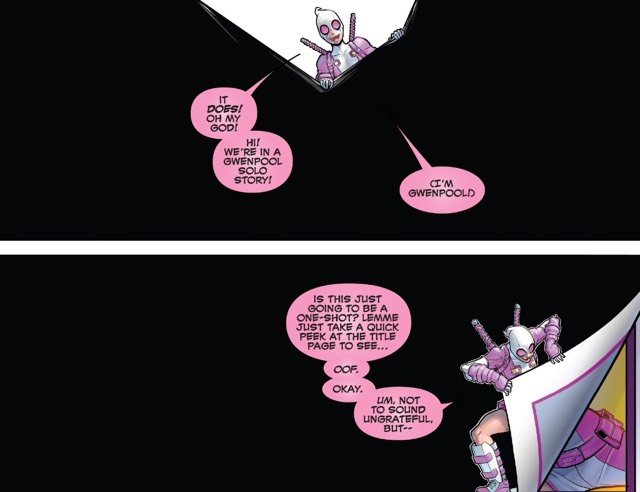 Got all that? I bet you’re never read a Marvel Comic before where the villain is actually Marvel Comics.

So Gwenpool’s plan is to get herself an interesting super power, since she doesn’t actually have any of her own. At least, she says she doesn’t, but personally I feel that her copy of Deadpool’s comic awareness combined with some hilarious quips are the best superpower of all. I mean, it’s not often you see a Marvel character reference a DC character. So her plan to obtain a super power involves bringing in Spider-Man, which seems like an obvious ploy to gain readers. But hey, I guess that fits in with her plans anyway. Spidey, who is typically a very funny character himself, plays the straight man to Gwenpools comedy. The dynamic between the two characters is a lot of fun and I would love to see more. With her whole world collapsing around her, Gwenpool desperately searches for a super power before her whole existence is written out of, well… existence. It’s truly a bizarre supervillain moment unlike any other. Again, the villain here is basically the writer so that makes it very different. 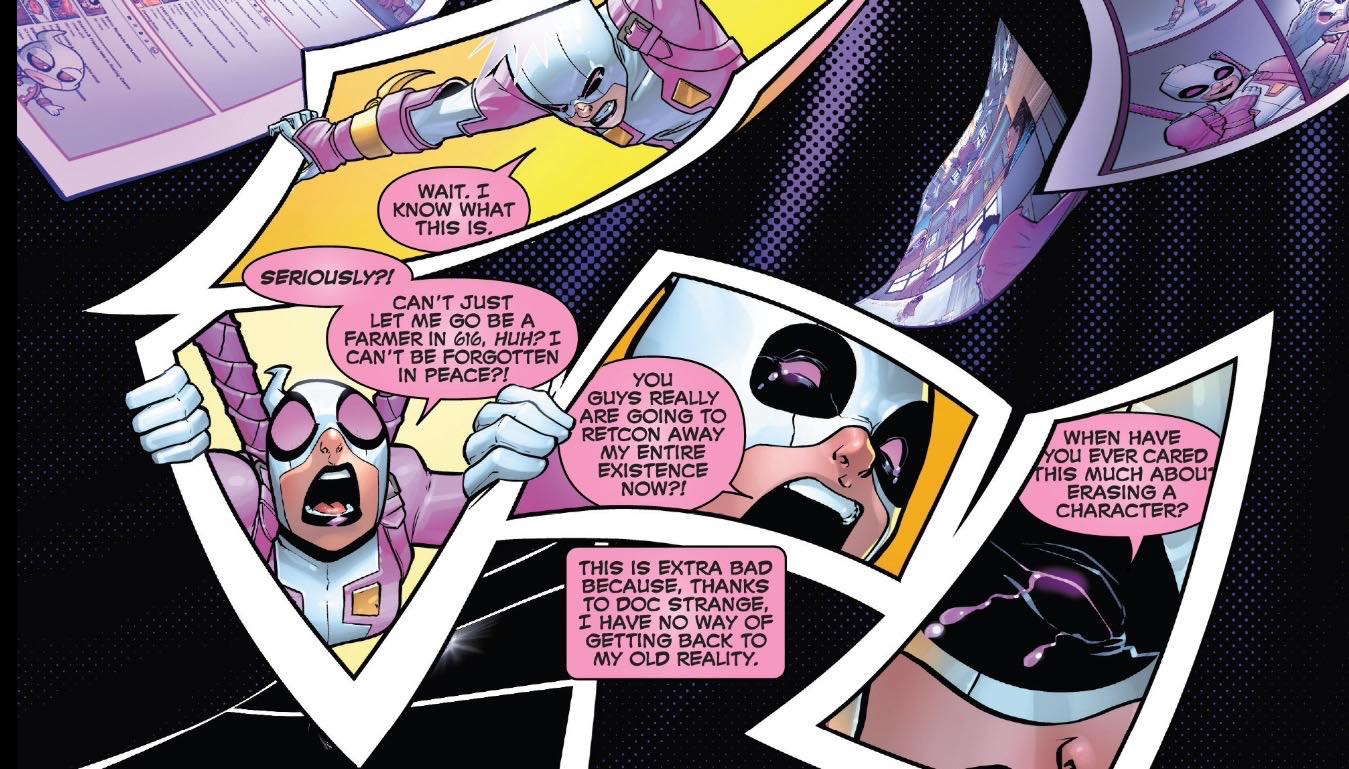 Overall, I think “Gwenpool Strikes Back #1” is a great start to a new series and a fantastic introduction to the character. You definitely do not need to go back and read the back catalogue of Gwenpool comics to get this one, but once you’re done with this one you probably will want to.

“Gwenpool Strikes Back #1” is available now.