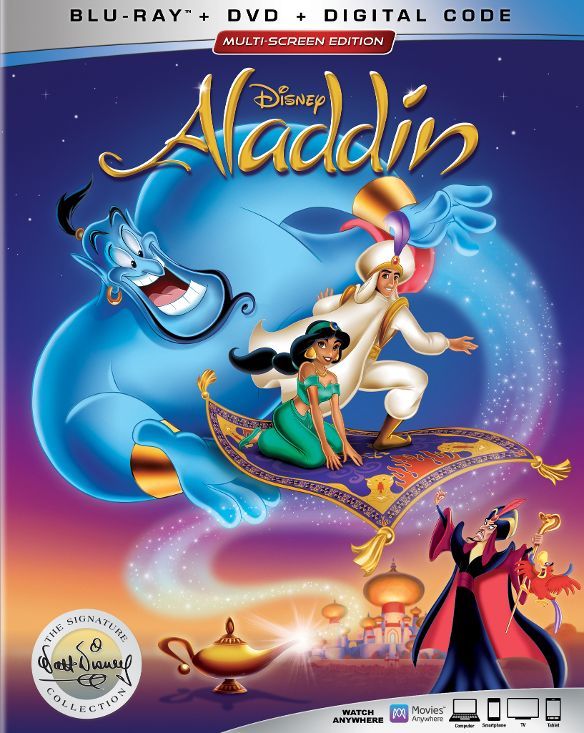 Disney’s Aladdin returns from the Disney Vault on September 10th as part of the Walt Disney Signature Collection, the same day the recent live action adaptation makes its home video debut. If you missed the Diamond Edition release, the good news is that a lot of the bonus features from the previous releases are included here. If you already own it, there’s a few new bonus features that may or may not be enticing enough to warrant another purchase. But whether you’re picking this release up or not, it’s definitely a perfect time to revisit the animated classic.

When orphaned street-rat Aladdin meets Jasmine, a princess in disguise, the two discover that they have more in common than they think. But when the evil Jafar imprisons Aladdin, it turns out he is the “diamond in the rough,” the only living soul capable of entering the Cave of Wonders where a long lost lamp has been kept for ten thousand years. When Jafar’s plans fail and Aladdin gets the lamp instead, his powerful Genie grants him three wishes, leading Aladdin on a magical adventure and exposing him to a “Whole New World” of excitement.

The initial success of Aladdin lead to several sequels, a long-running animated series, theme park attractions, stage shows, and most recently a live action adaptation starring Will Smith. Despite the overabundance of opportunities to experience Aladdin in a variety of formats, the animated classic is still the best adaptation to date and the main reason is Robin Williams as Genie. Some of the pop culture references may date the film, but the shapeshifting transformations as Williams does celebrity impersonations make this version so special and iconic.

Relive the adventure and magic with the Walt Disney Signature Collection release of Aladdin. This review covers the Blu-Ray/DVD/Digital combo pack, but fans can also upgrade their experience to 4K, which adds the extra lines of resolution and comes with a Blu-Ray and digital copy code.

What’s Missing? The following bonus features were included in previous releases and are omitted this time around.

Aladdin’s Walt Disney Signature Collection Blu-Ray release appears to be a different transfer from the previous Diamond Edition in that the Diamond Edition offered the original theatrical ratio of 1.85:1, whereas the Walt Disney Signature Collection gives the full animated ratio of 1.66:1, which means you will have pillarboxes on the sides of a widescreen TV. The colors, on the other hand, seem exactly the same and has the same excellent amount of clarity.

All of the Diamond Edition’s audio options are replicated in this release. The 7.1 DTS-HD Master Audio track allows music and sound effects to make float through the rear speakers, as do off-screen voices. Jafar and the Cave of Wonders give your subwoofer a workout in this enveloping mix. Other language options include French and Spanish 5.1. New to this release is a 2.0 English Descriptive Audio option.

Aladdin returns to Blu-Ray in a standard-sized case with disc holders on both sides of the interior. The slipcover features embossed letters and a foil effect. Inserts include a digital copy code through Movies Anywhere and a flier for Disney Movie Club.

The disc opens with an anti-smoking PSA starring Cruella DeVil. There aren’t any trailers or ads. The menu features a CG lamp that emits blue and purple smoke that clears to reveal scenes from the film while an instrumental version of “Friend Like Me” plays.

There’s no doubt that Aladdin is a wonderful film and worthy of its classic status. This Walt Disney Signature Collection release adds a few voice actor-centric bonus features that are entertaining, but don’t add much to the behind-the-scenes story that isn’t already available through previously available bonuses. The absence of deleted songs is puzzling and a bad choice as the music from this film is so special and it’s always nice to explore the abandoned concepts. The aspect ratio change is also a questionable choice. For those reasons alone, the Diamond Edition is the superior release. If you have it, keep it.