As the wave crests on Freeform’s 30 Days of Disney and our celebration of it, today’s featured film is 2002’s Lilo and Stitch. For some inside baseball, when we were determining which of our contributors would be writing about each of these 30 movies, I called dibs on this one pretty early one. What’s funny about that is that I’ve kind of had a love-hate relationship with Stitch over the years, making this a strange choice for me. However, upon further inspection, it actually made perfect sense as I could explore what it is about the Experiment 626 that I enjoy and what I, ya know, don’t.

Lilo and Stitch was released when in high school, yet I remember seeing one of the hilarious teasers for the film and being thoroughly entertained. Starting with a scene from a classic Disney film (I’ve seen ones for The Little Mermaid, Aladdin, Beauty and the Beast and The Lion King), these trailers first had me expecting some sort of re-release was imminent, much like the old days of Disney… or like a few years ago when 3D rereleases were all the rage. Instead, the scene was literally stolen by a blue dog-looking alien with big ears we were then told was named “Stitch.” At the time, I thought these clips were really clever and I actually still do.

The next summer, I went to see the film with my friend Mic. By this point, I actually worked at the movie theatre and was able to get us in for free (bonus!). I don’t remember much about the film except that I liked it well enough and I recall that Mic and I both nearly died laughing at the scene where Lilo decks a girl in the face for calling her crazy. 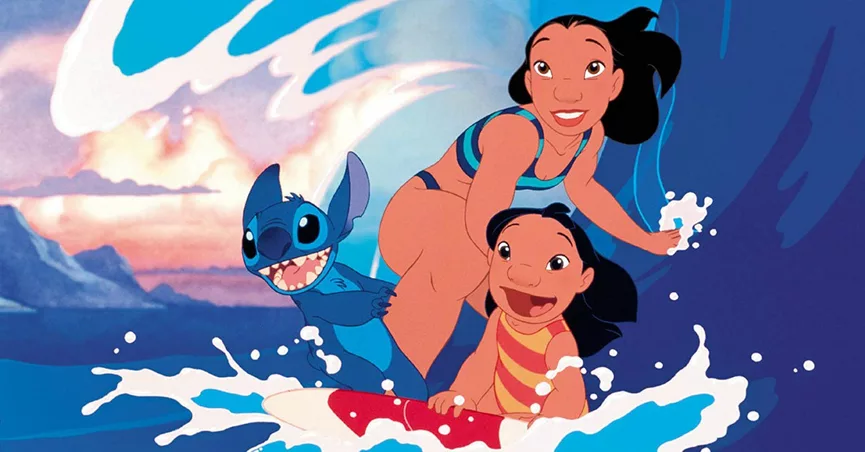 I always thought Stitch was pretty cute and admired the rebellious nature showcased in the teasers. But then, sometime after the movie’s release, something happened: Stitch got annoying. It’s not just that Stitch, who was supposed to be the oddball and rebel, was now seemingly everyone’s favorite, but stunts like wrecking Cinderella Castle to celebrate the opening of Stitch’s Great Escape rubbed fans the wrong way.

Not as any form of protest really but just because I don’t need chili dog belched in my face, I had never been on Stitch’s Great Escape and have no plans to (assuming it reopens, which seems very unlikely but remains the company line, I believe). Additionally, that attraction — which is widely considered one of Disney’s worst ever — had sullied the character for me. To be honest, I don’t even really mind the TP’d castle all that much, but if Disney thinks that that’s what Stitch stands for then I was always inclined to agree and despise him thusly.

This casual disapproval has started to turn around for me over the past few years as I’ve seen positive versions of the character, namely in Tokyo Disneyland’s The Enchanted Tiki Room: Stitch Presents Aloha e Komo Mai. In that show, 626 is still a bit of a troublemaker but a friendly one who just wants to have a good time and play some songs. The animatronic in Aloha e Komo Mai also reminded me how cute Stitchy is when he’s not attacking you in a darkened theater. As we plan for another trip to Tokyo next month, I can honestly say this is one of the attractions I’m most looking forward to experiencing once again.

More than 17 years (wow, really?) after his initial debut, I’d now say that I’m a fan of Stitch. This is to say I might not run out to buy the Blu-Ray or spend hundreds for pins that he’s on, but I did nearly purchase a Stitch hoodie on our last trip to Disneyland Paris. So Stitch, I guess what I’m saying is that I won’t leave you behind or forgot you… but I also glad your Magic Kingdom attraction is no more.

Lilo and Stich is airing on Freeform as part of their 30 Days of Disney programming and will arrive on Disney+ when the service launches November 12th.