As a charter member of D23: The Official Disney Fan Club and a lifelong Epcot fan, I am ashamed to say this but before this year I had never taken part in one of the longest D23 Florida events: the Sip & Stroll! I know I need to give up my membership card now and forget the secret handshake (please note there is no secret handshake), but I am not a partaker in adult beverages nor am I a big foodie so I never saw the draw, that was until this year.

“During this special opportunity in the Norway Pavilion VIP Lounge, D23 Members and their guests will get an exclusive look at the development of the all-new, limited-time spectacle of fireworks, music, lighting, lasers and choreography, Epcot Forever! Attendees will learn how the creative team brings together a collection of songs and visuals that celebrate the past, present, and future of Epcot!”

That was how it was sold on the D23 site when first announced last month before I even had seen anything from Epcot Forever but any chance to hear behind the scenes stories I am in. Now fast forward to October 21 and the gathering of 100 D23 Members in the Norway Pavilion VIP Lounge and the excitement really grew. If you have not been to a smaller D23 event I suggest it because it is a great way to meet fellow members and connect with them especially hearing stories of how quickly tickets for this event sold out “4 seconds” was one of the more popular responses. The morning kicked off with Alex from the D23 team welcoming us and giving us an update on activities and events coming next year (keep an eye on D23 social media) not only to Florida but also New York and Chicago. Alex then lead us in a toast with the Aulani Sunrise drink from the Hawaii Festival Kitchen, an Epcot International Food & Wine Festival favorite. 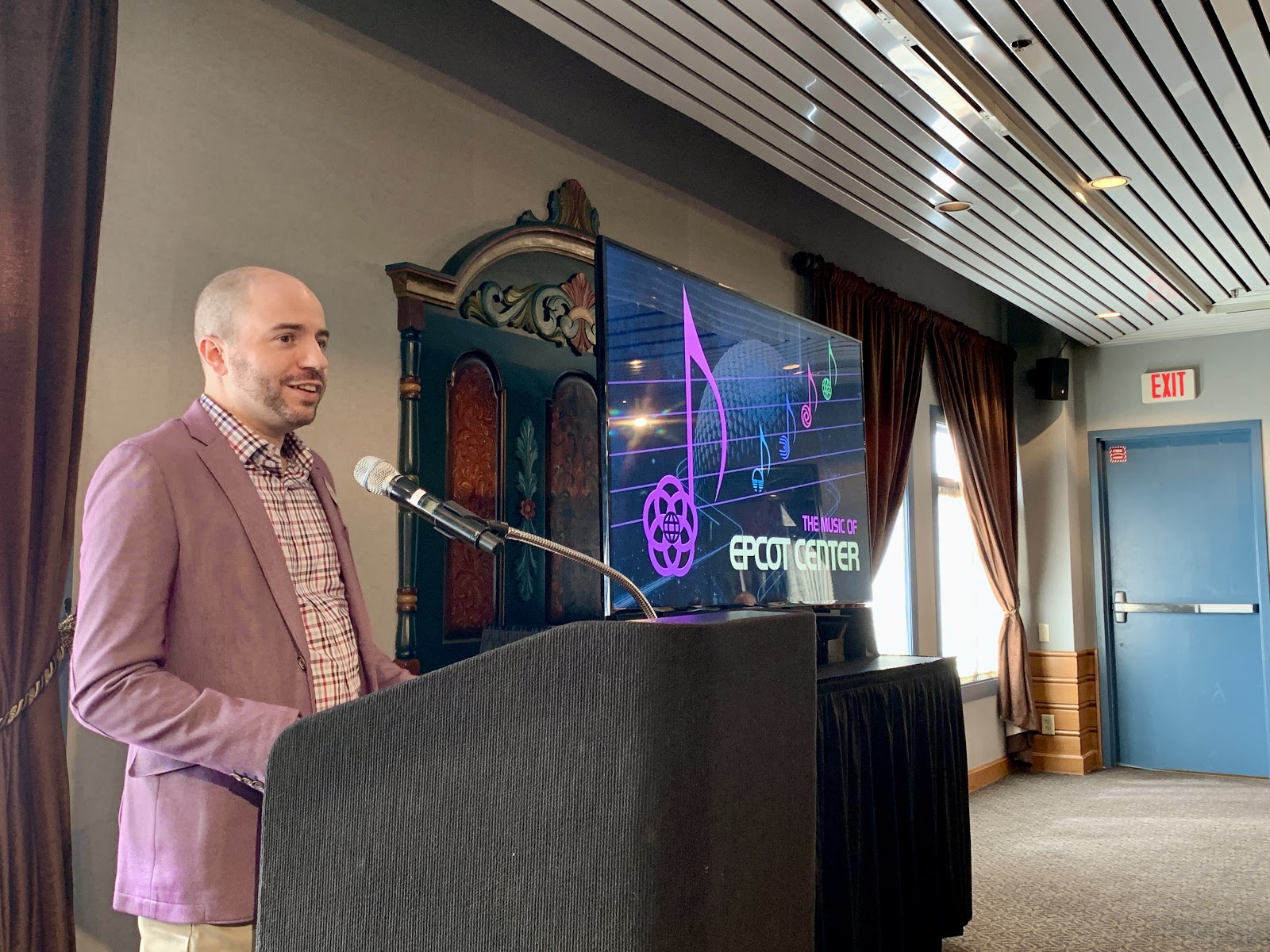 Alex then introduced Steven Vagnini long time D23 team member now Show Awareness Producer, Walt Disney Imagineering to give a presentation about “The Music of EPCOT Center.” Steven took us on a deep dive into the history of the music of his favorite park starting with one of the most interesting bits of trivia I had never heard, and believe me, that is saying a lot. The oldest musical composition to have survived in its entirety is a first century A.D. Greek tune known as the “Seikilos Epitaph.” If you listen to “We’ve Just Begun To Dream” one of the first songs written for EPCOT Center that served as its theme you may notice a familiar tune. He also shared many never before heard demos for the parks attractions including Betty Taylor, of Disneyland Golden Horseshoe Revue fame, and Pete Renaday, Henry himself from the Country Bear Jamboree, doing an early version of “Veggie Veggie, Fruit Fruit” and the Sherman Brothers demo for “One Little Spark.” Steven could have gone on for hours with all the music that was packed into Epcot in its opening days but he passed over the podium to Aaron Rowe (General Manager, Epcot Entertainment) and Alan Bruun (Show Director, Disney Parks Live Entertainment) two of the men behind the newest nighttime addition to the park, Epcot Forever.

Now after a look at what we were to see later that night, it was time for a preview of what we were going to have the chance to experience for the rest of the day as Rick DeCicco (Proprietor, Epcot Festivals) gave us a bit of trivia about the Epcot International Food & Wine Festival then let us taste some festival favorites before setting us loose into the park. Rick asked a few trivia questions and that most knew but the stand out one, to me at least, was “what is the most popular item at the festival?” Many attendees called out personal favorites, but we learned it was actually Le Cellier Wild Mushroom Beef Filet Mignon not the long rumored Canadian Cheddar Cheese and Bacon Soup. But he did say that the soup was the third most popular. One of the highlights of Rick’s time was sharing with us the story of how he came up with the Swine Brine featuring Jim Beam Bourbon drink at the Flavors from Fire Marketplace including sending someone to get some Grey Poupon mustard to add some extra flavor.  He did have a few minutes before our tasting adventure was ready to answer any questions, which I was lucky enough to be able to ask “what is the second most popular item at the festival?” His answer surprised most of the audience because it was not a bigger name item but Pão de Queijo: Brazilian Cheese Bread from the Brazil Global Marketplace! Rick did also give one of his favorite “food hacks” that he likes to take the Crispy Pork Belly and stick it inside the cheese bread and with that tip we were free to enjoy the lounge with a few offerings from the festival and have a chance to take a picture with the unofficial mascot Remy. 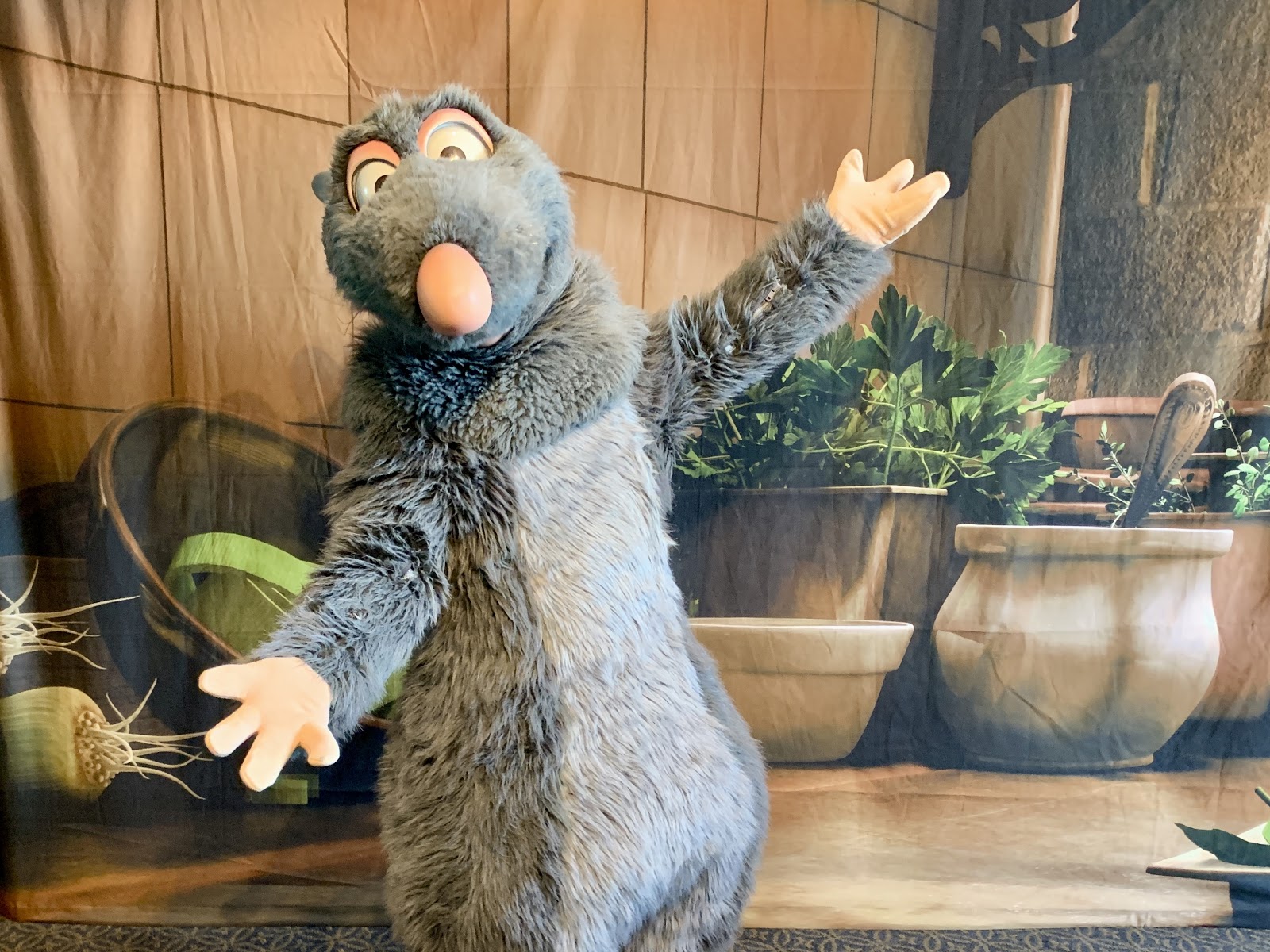 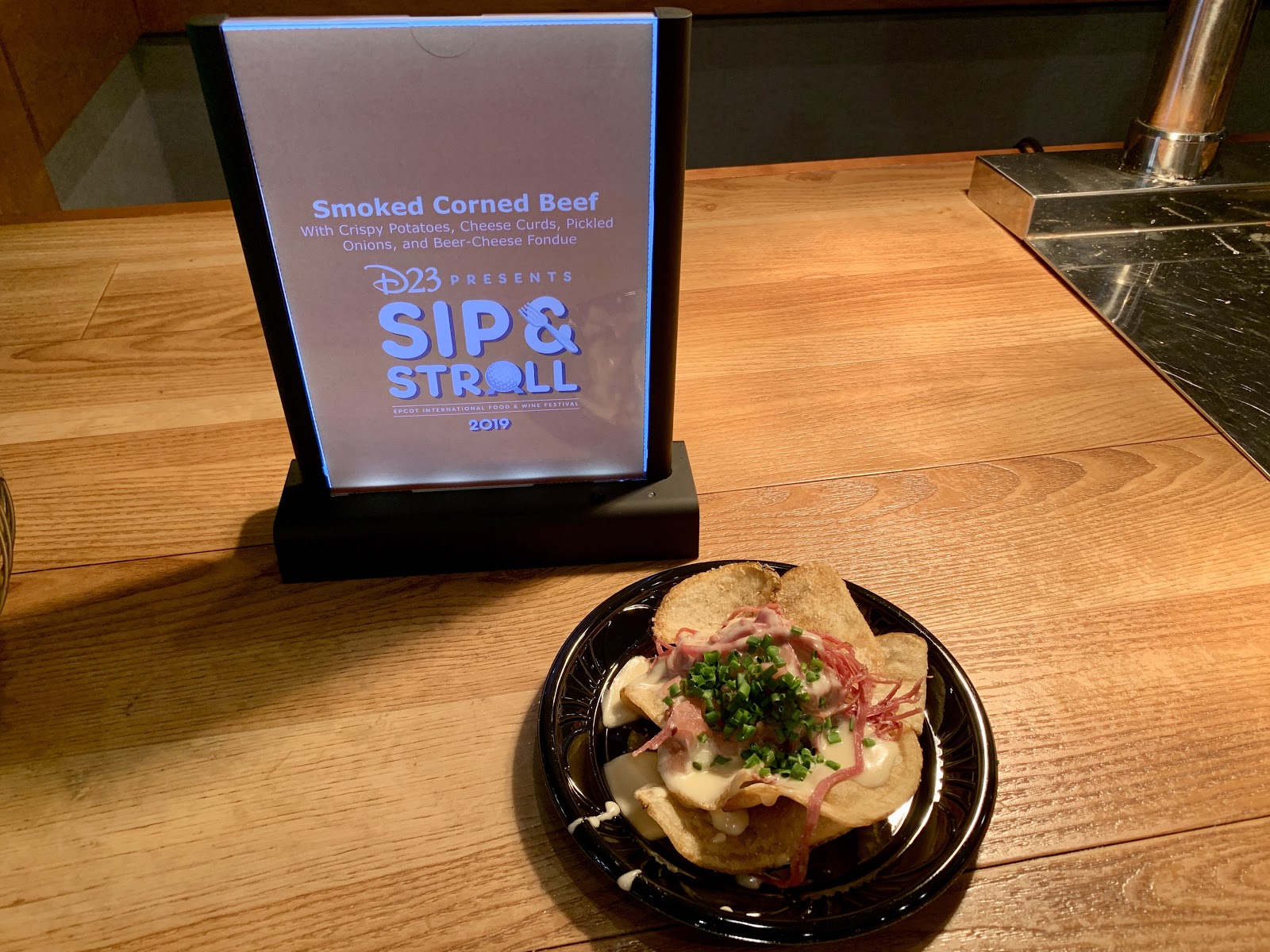 Now it wouldn't be a D23 event without a gift and we were all given an exclusive D23 branded reusable water bottle. The day was far from over as we had a $25 gift card to use as we enjoyed the “sip & stroll” part of the day before we met up in Italy that night for a special dessert party and viewing of Epcot Forever. What was set for the Italy Isola for the dessert party was quickly moved into the American Adventure Rotunda due to some weather challenges but didn’t put a damper on the fun. After enjoying the beautiful rotunda and some great dessert we were escorted out to the private viewing area in front of Italy where the day was topped off with a perfect view of Epcot Forever.