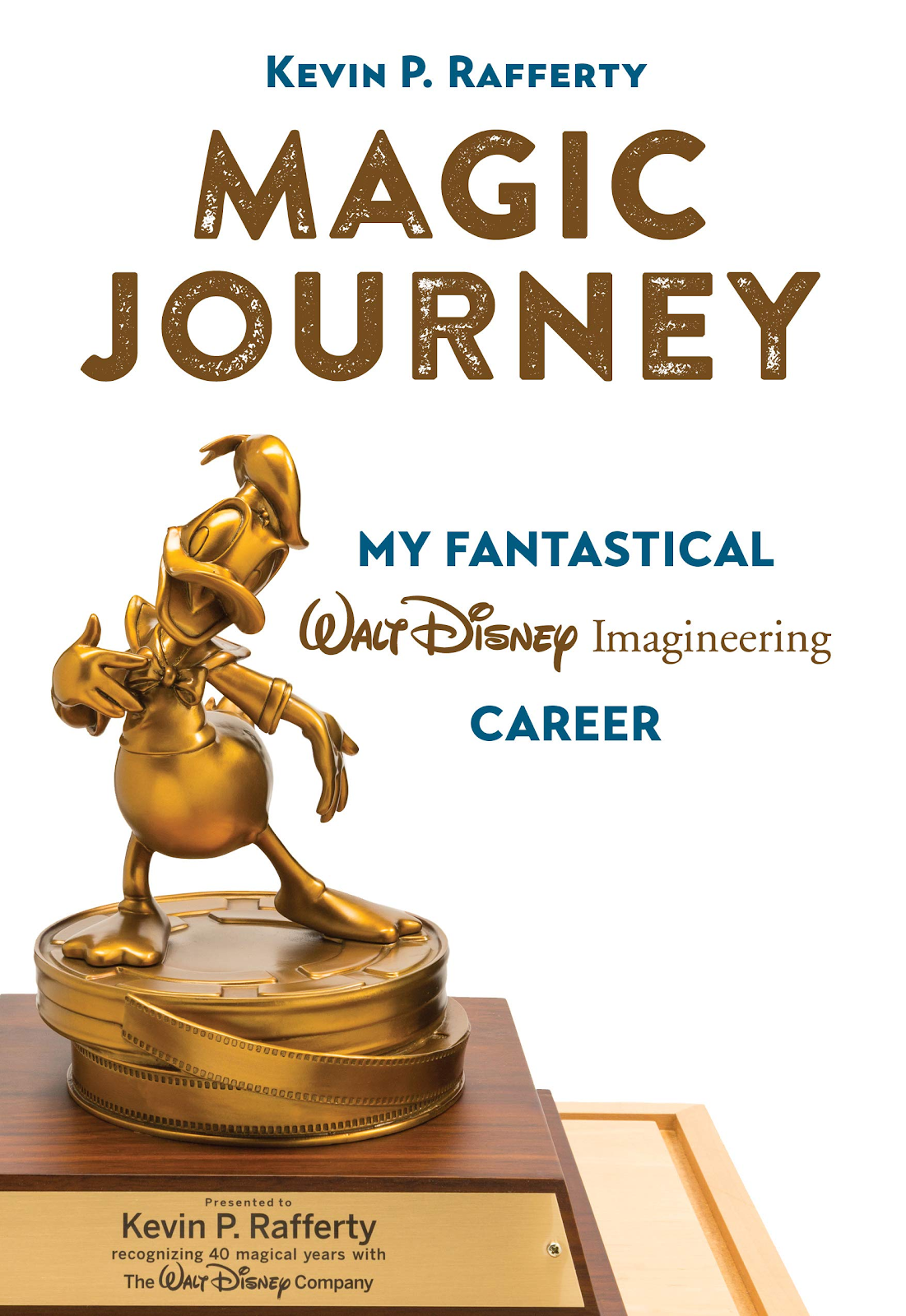 It’s a good year for fans of Disney Theme Parks with the release of Marty Sklar’s final book, Leslie Iwerk’s Disney+ series The Imagineering Story, Pete Docter’s Marc Davis in His Own Words, and the opening of Star Wars: Galaxy’s Edge at Disneyland and Walt Disney World. It’s easy for something like Kevin Rafferty’s Magic Journey: My Fantastical Walt Disney Imagineering Career to get lost in the shuffle and I hope you won’t let it. I’ll spill the beans early in this review, it’s the best book about Imagineering I’ve ever read and I think I’ve read them all.

You’ll laugh, you’ll cry, and you’ll cry again from laughing as Kevin Rafferty shares highlights from his exciting Disney career that began like so many with a role at Disneyland. One of the reasons Magic Journey is such a compelling read is that you get to know Kevin personally through his stories, rooting for him as he meets his love interest and takes a risky entry-level job at WED Enterprises to pursue his dream. By the end of the book, you’ll feel like he’s a close friend who just shared his insight, wisdom, and funniest stories with you.

In the same way that we as fans marvel and awe at the behind the scenes process of creating the happiest places on earth, Kevin Rafferty had the same sense of wonder and excitement in his first role at WDI where he documented the big doings for the EPCOT project that lead to his big break on a restaurant at Tokyo Disneyland. In case you’re not familiar with Rafferty’s credits, here are a few of the experiences that wouldn’t be a part of a Disney Park experience without him.

That list doesn’t include some of the projects that didn’t make it past the design stage, which are a lot of fun to read about. The book includes many personal pictures from Kevin Rafferty’s collection, which includes concept art and models for unbuilt attractions like “The Creature’s Choice Awards Show,” “Toontown Transit,” and the original “Carland” that evolved into Cars Land. It’s always fun to think about the “What could’ve beens” and Kevin takes readers through these great attractions that will never be.

Why is Magic Journey, a book about one man’s Imagineering career and the projects he worked on, so gosh darn funny? Well, Kevin Rafferty is a brilliant writer who likes to have fun with words. In many cases, the way he writes accentuates certain words or sounds in such a way that you can hear the comedic delivery of them. But for someone who worked on so many thrilling attractions, he actually can’t stand thrill rides, which is where some of the biggest laughs come in, and he also spends more than a few nights in unintentionally haunted locations on his research trips. The book also begins with Rafferty almost going down a religious career path so his view on working with someone like Steven Tyler from Aerosmith and watching the notorious lead singer talk to his son about the “Birds and bees” is the kind of anecdote that will give your abs a laughing work out.

There are plenty of books about Imagineering that give you an overview of the history and significant contributors of the art form (Kevin Rafferty even wrote one!). There have also been many books written by Imagineers about the philosophy and values of the department and how you can apply them to other business endeavors. The reason why I say Magic Journey is the best of the bunch is that it does what WDI does best, it tells a story about a man who followed his dream and lived through some incredible experiences while crossing paths with some WDI legends. You’ll organically pick up a few WDI principals along the way, but most importantly, you’ll be edutained.