Eoin Colfer has brought us the beginning of a hilarious series of books about bickering brothers trying to find their place in the shadow of their older sibling. The Fowl Twins brings the reader back to the world of Artemis Fowl and this time Colfer has centered the book around both brothers, Myles and Beckett Fowl on their first adventure in the world. 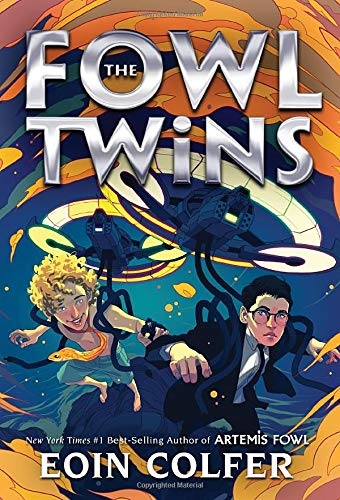 The eleven-year-old twins have been seen before in the previous Artemis Fowl series of books, but now the boys are facing their first grand adventure where they will use all their skills to defeat their enemies. Through several chance encounters Myles and Beckett team up with a pixel from the Lower Elements Police named Lazuli Heitz, battle against an age-defying duke named Lord Teddy Bleedham-Drye who is the Duke of Scilly, and Sister Jeronima Gonzalez-Ramos de Zarate of Bilbao who is the head of an international organization called ACRONYM that was formed to investigate magical creatures after the events of the last Artemis Fowl book.

Colfer has given us two heroes in The Fowl Twins, and two baddies that are so ridiculous in name and dress that readers cannot help but cheer on the boys as they fight against the two criminals. Their lives intersect when a toy troll wanders on to the beach at the Fowl home on the Dalkey Island and is noticed by Beckett Fowl.

Beckett is obsessed with animals and believes that he can truly speak to them. The troll is being stalked by Lord Teddy and just misses hitting the magical creature with a tranquilizer dart. Lord Teddy has learned that trolls can help prolong lives, and the age-defying Lord is on a quest to harvest the troll for his own gain. This attempted abduction is monitored by the Fowl AI system NANNI and both Beckett who has picked up the troll, and Myles are whisked off to the safety of the estate. Myles deploys the EMP pulse that the house has, and the adventure is just beginning.

Soon Specialist Heitz of LEP is following the boys as they are whisked off by Sister Jeronima to an ACRONYM site, with Lord Teddy following behind in pursuit of the troll, whom Beckett has named Whistle Blower, and communicates with the magical creature through a series of grunts. From Amsterdam to the St. George Islands Myles, Beckett, and Lazuli are chased for their precious cargo, until the final battle where intelligence outweighs the abundance of fire power.

I was hesitant about starting The Fowl Twins because I loved the Artemis Fowl series so much that I worried this new series would be a weak follow up. How I was wrong! The first thing that Colfer did was to establish where Artemis Fowl was. He is on a journey to Mars and won’t be back for years. One thing that was not needed was a physical appearance by Artemis Fowl. The Fowl Twins inhabits the same world as Artemis, but as a reader I was glad to see that he, Butler, and even the parents are not a physical presence in the book. None of them are needed at this point in the story. Though the use of video messages left by Artemis is a nice nod to the first series of books by Colfer.

Myles is the thinker of the twins. His intelligence is equal to his bigger brother, if not greater, but what Eoin Colfer does to establish this new character as different from Artemis is to inject Myles with a shade of doubt. Myles is a genius, an analytical, critical-thinking, super smart boy, who doubts himself when he things go wrong, and makes critical mistakes. As they are being chased Myles orders a new suit for himself which allows Lord Teddy to track the group. Myles is brilliant, but he does make mistakes which allows the reader to see him as human. Subtly, Colfer is reminding the reader that no matter how smart you are, everyone makes mistakes. Moreover, Colfer often has Myles talk about how the Fowl family use to be criminals. One has to wonder with this family history and the shade of doubt about his own abilities, will Eoin Colfer take Myles down a darker path in future books?

Beckett Fowl is the other half of The Fowl Twins coin. While Myles spends his days trying to best his older brother, creating lists of plans that Myles wants to achieve, Beckett chases after animals and attempts to communicate with them. Beckett loves his goldfish Gloop so much that when he died, he laminated the body and made it into a tie so that Beckett could always wear Gloop around. At first glance one might see The Fowl Twins as a dichotomy of brains (Myles) and brawn (Beckett). The reader would be so mistaken to assume this role. Beckett is not only intelligent, but he subverts the ideas of his brother intentionally by pretending to not pay attention. Myles does all the thinking, but Beckett doesn’t have a shade of doubt about his own abilities, nor what he can do. Beckett is supremely confident in his own abilities and never wavers in this notion throughout the book.

Lazuli Heitz is another creative addition to the novel. Unlike Holly Short, Lazuli really doesn’t know what she can do. She has the seed of doubt planted in her for the fact that she is a pixel which is a rare, magical creature, but as of the start of the book, Lazuli has no magical powers. She is told that the magic will come when it is ready. Heitz has all the training necessary to survive above the ground in the human world, but she must learn to trust herself and it is her association with the Fowl twins that will truly help her grow.

A second series of books based in the world of a popular set of books can thrive or fail miserably depending on how the author introduces this new version of a world we know so well. Fans of the Artemis Fowl books will love The Fowl Twins because we recognize so much of the world being brought to us from past books, but The Fowl Twins allows a second chance to play for the first time in a well-established sandbox.

Myles and Beckett Fowl have many similar characteristics to Artemis, but they are completely different characters. Each has their own strengths and weaknesses, but they are whole new characters that make us want to read every word of the page to get to know these brilliantly diabolical and hilarious characters.

Readers will laugh out loud at Beckett as he annoys his brother by always pretending to not know what needs to be done. Any reader with a sibling will see and remember their own moments of frustration as we follow Myles and see how annoyed he gets at Beckett for not following his plan to the letter.

The Fowl Twins is an intelligent and humorous addition to the Eoin Colfer literary world. Fans will love the nods and winks to Artemis Fowl, and new readers will enjoy this standalone series with two highly intelligent and hilarious characters that will capture your heart in a way that Artemis Fowl could never do.

Four stars out of Four for Eoin Colfer. The author found a way to jump back into a familiar world and make it new. From the characters to the tone of his writing, everything is a new discovery that will engage readers from young to old. With humor throughout, and diabolical villains equivalent to James Bond-level of sinister, The Fowl Twins is a fantastic read that you will not put down until you are finished the last page.