Famously, when it comes to the Walt Disney Company, it all started with a mouse. Today, that mouse — named Mickey, of course — is turning 91 years old. If you’re looking to celebrate the big day, Disney+ may just be the perfect way to do so. Thanks to the streaming services large library, you can watch the evolution of Mickey Mouse over the years:

A.K.A. the one that started it all… well, kind of. Sure “Plane Crazy” was technically the first Mickey cartoon to be screened, but it was “Steamboat Willie” that served as the world’s introduction to the character. Released on November 18th, 1928, this seven-minute short has now entered the 21st century as it can be streamed on Disney+.

There may not be many Mickey shorts that the most casual of Disney fans are familiar with, but 1935’s “The Band Concert” likely makes the cut. That’s thanks in part to its inspiration of the ironically named Silly Symphony Swings in Disney California Adventure as well as Mickey sometimes donning his band leader outfit for meet and greets.

Speaking of meet and greets, long before the mouse was demonstrating his magic skills on Main Street, he was performing his illusions in front of an audience that included a heckling Donald Duck. 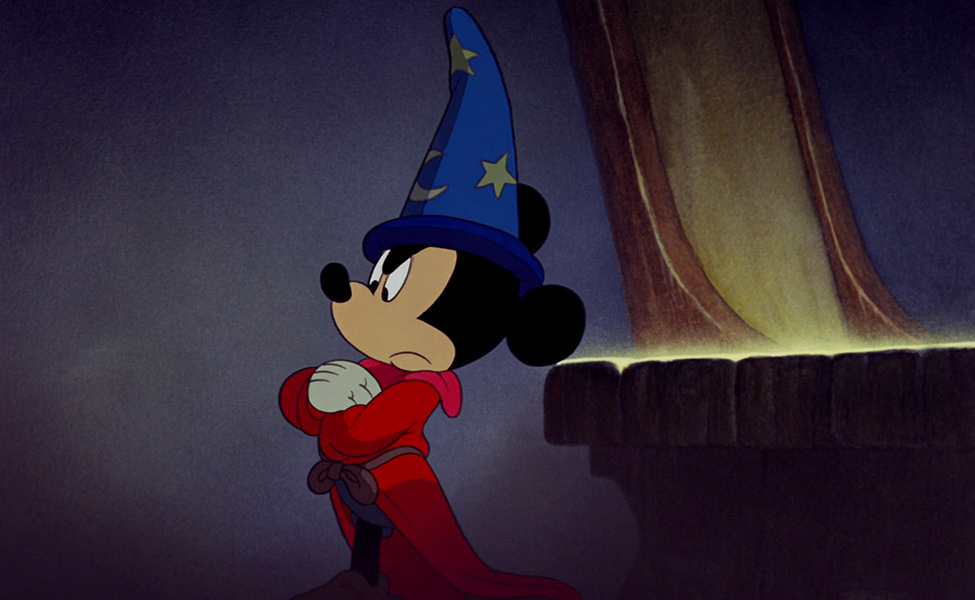 Fantasia was a real experiment for Disney, but Walt was smart enough to put his star in the production as well. Of all the iconic imagery that emerged from this masterpiece, the Sorcerer Mickey featured in the “Sorcerer’s Apprentice” section of the film is perhaps the most well-known. In fact, today you can catch him (nearly) nightly in Fantasmic!

Because you kind of need to watch a short about Mickey’s birthday on his birthday, right?

Released in 1947, Fun and Fancy Free is one of Disney’s “package films” that stitches a feature together out of shorter stories. The second of these stories is “Mickey and the Beanstalk,” which as you can probably guess takes inspiration from the “Jack and the Beanstalk” story. Even if you’re not familiar with this film per se, Magic Kingdom guests may recognize elements of it from Sir Mickey’s found in Fantasyland.

Despite being the leader of the club that’s made for you and me, Mickey isn’t really the main attraction of the 1950’s Mickey Mouse Club. Nevertheless, he does frequently appear and — after all — does have his name prominently in the title, so we’re counting it.

Jumping way ahead, “Mickey’s Christmas Carol” not only works as great viewing for the mouse’s birthday but this short could also help you get into the holiday spirit. Stepping outside of Mickey-centric entertainment for a moment, may we also suggest a double feature of this and Muppet Christmas Carol? Or…

What’s that? You want more Mickey holiday entertainment? Well here’s a twofer: Mickey’s Once Upon and Christmas and Mickey’s Twice Upon a Christmas. Incidentally, despite being released only five years apart, these duo films feature some very different animation styles, further showing the evolution of Mickey and the gang.

Another direct-to-video retelling of a classic tale is 2004’s Mickey, Donald, and Goofy: The Three Musketeers. By the way, those who didn’t care for the Fab Five’s (or Sensational Six’s) look in Twice Upon a Christmas will be happy to know that this feature utilizes a more traditional style.

If you don’t have small kids (or didn’t about a decade ago), you might not have ever seen Mickey Mouse Clubhouse. On the other hand, if you did have kids of a certain age when the show was airing, you might know this one all too well. Yes, this show is geared towards a younger audience than much of Mickey’s work but, if you have the time, it’s worth at least checking out an episode or two.

It may be hard to believe but those “new” Mickey Mouse shorts have been running on Disney Channel for six years now (Disney+ says they started in 2012 but it was 2013). Despite this longevity, there’s still some controversy surrounding the style of these shorts in certain fan circles. But, this version of Mickey isn’t going away any time soon as he’ll be featured in Mickey and Minnie’s Runaway Railway coming to Disney’s Hollywood Studios and Disneyland.

Finally, if you don’t have the time for a full Mickey binge to see his evolution, perhaps you can make time for this two-minute Disney+ exclusive that features highlights from the Mouse’s storied career.

Keep in mind, these are just a few of the Mickey shorts and features found on Disney+ so be sure to search our content guide to see what else is streaming. Happy Birthday, Mickey!