You may already be familiar with the historical event known as the 1925 Serum Run— it was immortalized in the popular 1976 children’s book Race against Death: A True Story of the Far North and the 1995 animated feature Balto, plus the 2003 non-fiction book The Cruelest Miles: The Heroic Story of Dogs and Men in a Race Against an Epidemic and the 2013 documentary Icebound: The Greatest Dog Story Ever Told. But until now there has never been a live-action movie retelling the thrilling true-life events that took place nearly a century ago in Nome, Alaska.

Enter Disney+, the new streaming service that promises to deliver a steady stream of original content alongside the vast Disney archival library, and its new film Togo. It stars Willem Dafoe (Spider-Man, The Florida Project) as factual dogsled driver (also known as a “musher”) Leonhard Seppala, who played a significant role in delivering a transport of diphtheria antitoxin across Alaska in 1925, saving Nome from a potentially catastrophic epidemic. The movie serves as a biopic of sorts, focusing on Seppala, his caring wife Constance (played by Julianne Nicholson of August: Osage County and I, Tonya), and their relationship with their lead sled dog Togo. Its story kicks off with the above-mentioned diphtheria outbreak and Leonhard’s decision to make the dangerous trek to Nenana to retrieve the serum, but the action of that perilous voyage is interspersed with flashbacks of Togo’s troubled past as a member of the childless Seppala household. It seems Togo was born the sickly runt of his litter, managed to defy the unlikelihood of his survival, and went on to become something of an escape artist, regularly making his way out of various pens and other enclosures on the property to interrupt Seppala’s sled-dog training sessions— much to the gruff man’s chagrin.

Leonhard is hesitant to accept Togo, to the point where he tries on more than one occasion to give him away, but time and again the dog proves himself persistent enough to make his way back home, eventually earning him a tryout on the dogsled team. Naturally, we already know from the “present day” throughline that Togo has become a welcomed (and even honored) part of the family, but it’s still interesting to see how the dour, stubborn Seppala transforms from believing the dog needs to be disposed of to embracing him as beloved kin. There’s also a decent amount of cute-puppy footage in these segments that families in the audience will find irresistible. As Leonhard grows to love Togo, so do we. I don’t have a tremendous amount of personal interest in dog sledding, but I found the narrative of Togo to be engaging enough to keep my interest, and the ice-and-snow-crossing setpieces to be remarkably well shot and edited. The landscapes on display (shot on location in Alberta, Canada) are uniformly gorgeous and the cinematography by Ericson Core of The Fast and the Furious (who also notably served double duty as this film’s director) captures the natural beauty perfectly while efficiently getting across the fairly straightforward story beats.

This movie is largely an attempt to recontextualize an event that was previously depicted in less-than-accurate ways— both on-screen and throughout historical record— and it undeniably succeeds in that particular mission. The title of the film is a clue that its creators are attempting to correct a widely held misconception about the Serum Run (apparently spread by lazy and sensationalist newspaper reporting, a funny tidbit reproduced here in the third act) and which specific dog and musher pairing should have more deservedly received the lion’s share of the credit for saving over a thousand lives. 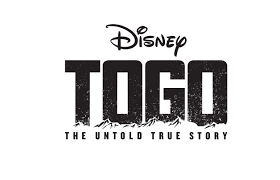 Togo feels refreshingly old-school in its concept and delivery, and I mean that in the most complimentary way possible. Aside from some minor but effective CGI work, this movie designed for Disney+ could have easily been made— and would have seamlessly fit in– among Walt Disney Studios’ output during almost any other era, including under the company’s founder. It’s a human-interest story but also the tale of a brave and loyal animal, not to mention the ever-growing bond between the two. While it may take some persuading to get young ones raised on the “Baby Shark” phenomenon and its ilk to sit down through this simply heroic adventure, once it has their attention I can see it becoming a beloved, frequently revisited favorite among children and the adults in their lives.

My grade: 3.5 out of 5 dogs jumping through closed windows